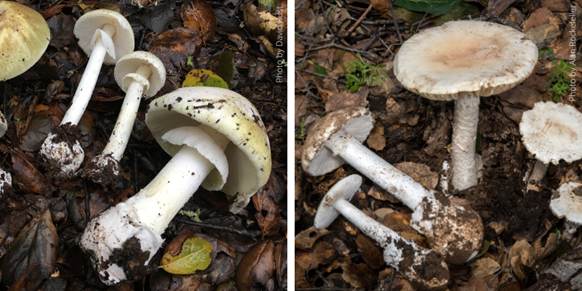 As rain falls in the East Bay Regional Park District, experts with the district say wild mushrooms will soon grow in abundance in parklands.

Though fungi is an essential part of nature’s ecosystem, some species pose a risk to human and animal life — two of the world’s most toxic mushrooms, the death cap and the Western destroying angel, will also be popping up around the region.

The death cap is a large mushroom with a gray cap, white gills, a white ring around the stem and a large white sac at the stem’s base.

The Western destroying angel is an all-white large mushroom with a thin sac at the base.

Both mushrooms contain toxic chemical compounds called amatoxins, which if ingested, can cause liver and kidney failure sometimes 12 hours after consumption.

Fungi expert and East Bay Regional Park District naturalist Trent Pearce said these mushrooms are mostly found near oak trees, and can be found anywhere oak roots are present. The death cap can also be found near other hardwoods.

“The best way to stay safe is to learn to recognize our poisonous mushroom species,” Pearce said in a statement. “Collecting mushrooms in East Bay Regional Parks is prohibited, but we encourage people to take photos of them and enjoy them like you would wildflowers or birds.”

Park officials advise dog owners to keep a close watch on their pets during the rainy season and to contact a veterinarian if they think their dog has eaten a toxic mushroom.

More images of the mushrooms are available at the East Bay Regional Parks website HERE.