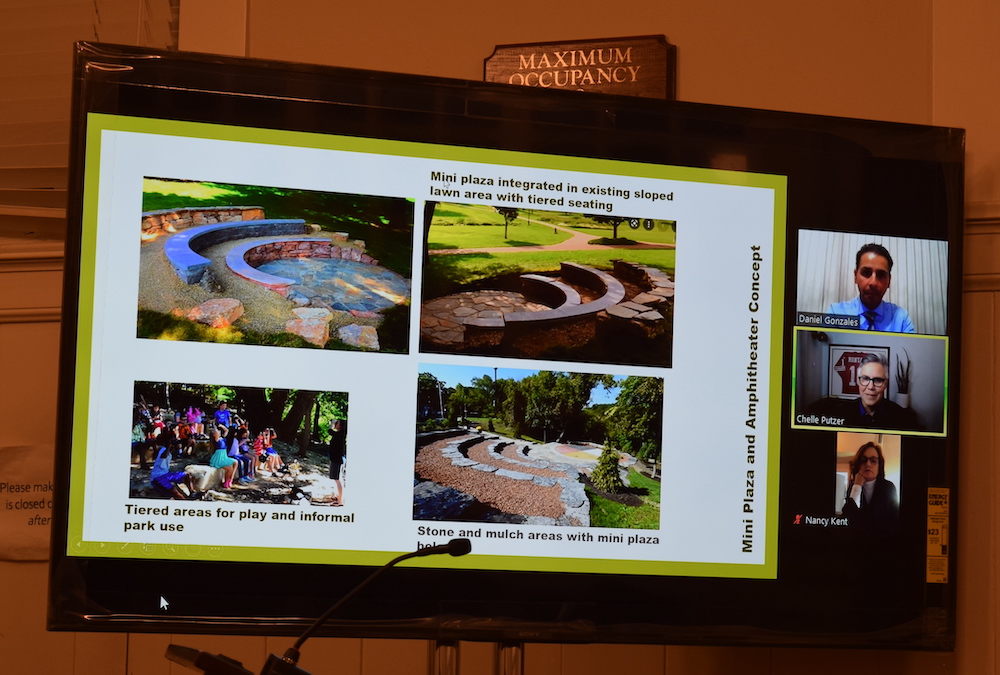 The Piedmont City Council is shown some images of what amenities in the freshly approved Outdoor Recreation Department Preschool and Public Space near the Community Hall could look like. Pictured taking part in Monday's council meeting are, from top, Public Works Director Daniel Gonzales, Recreation Director Chelle Putzer and Parks and Project Manager Nancy Kent.

The City Council this week approved spending about $231,000, including almost $185,000 in grant funding, on an upgraded open public space area immediately south of the Community Hall.

This to-be-developed space is viewed as a place to host various Piedmont Recreation Department programs, and perhaps for facility rental by the city for parties and other small gatherings, including Scout meetings, and sometimes just as a place where people could eat lunch in peace and quiet.

She said more details about exactly what this space’s amenities will look like have yet to be worked out. But the proposed project has two main elements:

The idea is for a removable fence to be put around whichever of these areas are hosting young children’s activities at a given time, Putzer said. This fencing would be removed when the classes and/or rec programs are done.

Of the grant money received, about $178,000 was funded by Proposition 68, the Parks and Water Bond Act of 2018, approved by state voters that year to authorize $4 billion in general obligation bonds for parks, water and environmental projects. Another $6,980 comes through an adjunct to that program specifically for urban communities.

The city had to provide $46,233 in matching funds, 20 percent of the total project cost, and budgeted that from the city’s Facilities Maintenance Fund.

Councilwoman Jen Cavenaugh asked whether the $231,000 price tag was at least somewhat high, given that other significant parks-related projects over the past several years had smaller budgets, more robust work or both. Daniel Gonzales, the city’s public works director, said the seemingly high price tag for this project is mostly a function of the current construction bid climate, which he said has raised the cost of such projects as much as 50 percent from even two years ago, likely because of COVID-19-related issues.

Cavenaugh also said she hopes the city seeks more input from the community as to how this soon-to-be-improved space should be used.