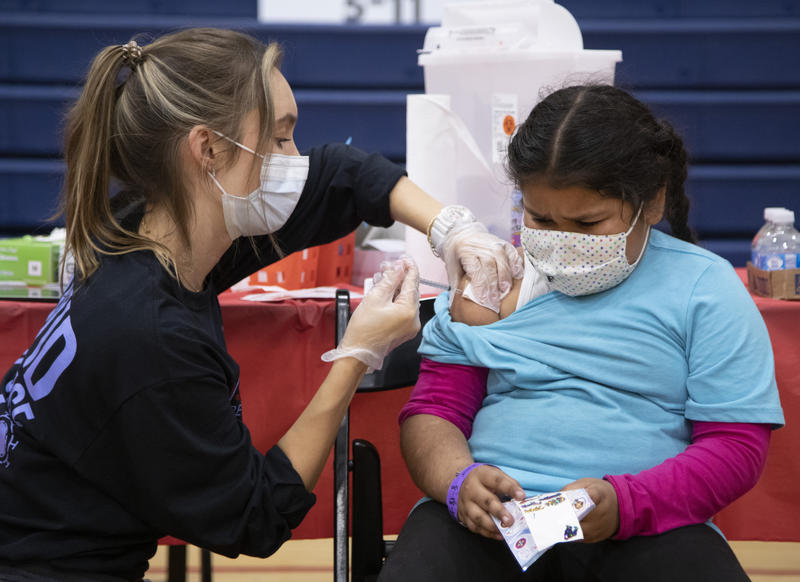 A child gets the COVID-19 vaccine at Arleta High School in November 2021.

Unprepared to add thousands of students to their independent study programs, several large California school districts opted this week to roll back their vaccine mandate deadlines.

Los Angeles Unified’s school board voted Tuesday to give students 12 and older until fall 2022 to receive both doses of the Covid-19 vaccine. By doing so they scrapped their original deadline of the start of the spring 2021 semester, Jan. 10, and aligned with the state’s vaccine mandate timeline.

West Contra Costa Unified board members followed suit Wednesday, voting to push the deadline back from Jan. 3 to Feb.18, while ramping up outreach to get more students vaccinated.

Though anti-vaccine and anti-vaccine mandate groups are declaring the deadline delay a win, school board members have made it clear that the decisions were not to appease them. Rather, as Los Angeles Unified school board member Jackie Goldberg said Tuesday, the decisions were made to avoid destabilizing the school environment for both vaccinated and unvaccinated students, since independent study programs like L.A.’s City of Angeles remain short-staffed.

“I want to tell those of you who come and say you think you’ve pushed us back: No, you didn’t,” Goldberg said. “The mandate remains.”

West Contra Costa Unified Superintendent Kenneth “Chris” Hurst said the district would not have been prepared to offer independent study to the 6,743 students 12 and older who had not verified their vaccination status as of Monday. The district’s independent study program, Vista Virtual Academy, already had a waitlist of 365 students this week.

Not offering those students independent study would have violated state law. Assembly Bill 130 requires districts to offer independent study for the 2021-22 school year to all students who sought it as an alternative to in-person instruction.

The state’s vaccine mandate will follow the federal Food and Drug Administration’s full approval of the Covid vaccine for each age group and is expected to go into effect in July 2022.

Currently, only the Pfizer vaccine is fully approved for people 16 and older. The Pfizer vaccine also has emergency authorization for use in children aged 12-16. LA Unified, West Contra Costa Unified, Oakland Unified and others adopted even stricter timelines.

California Department of Public Health officials said they will be working with local health departments and districts throughout the state to ramp up student vaccinations in the coming months.

“We are hopeful many families will see the benefits of vaccination and move forward with the decision to get their children protected against this deadly virus,” CDPH officials said via email.

LA Unified school board member Nick Melvoin this week said the logistical nightmare of transferring thousands of students to independent study amid a national teacher shortage is the “result of lack of support from the state.”

Goldberg concurred that LA Unified might be in “a different place right now” if the state had given districts “more choices of what to do with the unvaccinated (other than long-term independent study) than they have thus far,” or if the district had received more funding to entice teachers with better pay.

State Sen. Richard Pan, D-Sacramento, said in an interview with EdSource that legislators will be looking at ways to help districts in this predicament during the upcoming legislative session. That means addressing how the state can help districts build up their independent study capacity and what rules may be making that more difficult. Legislators will also be looking to update rules around immunization, making databases more accessible to schools, so that vaccine verification is easier on families. As it is, families currently have to verify their children’s vaccination status with their district even though that information is already available at the state level.

“I’m sure (verification and independent study) will be a significant focus in this coming legislative session,” Pan said. “It doesn’t look like Covid is going away anytime soon.  … We can’t have another school year still hampered because we haven’t addressed these issues. We need to get these kids educated.”