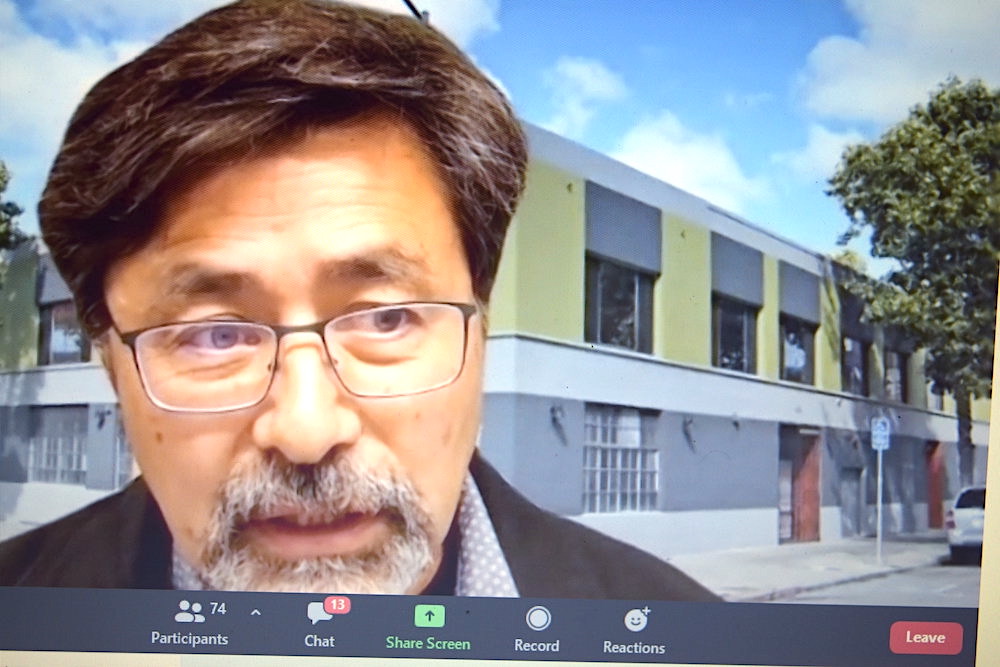 Panelists, including Andy Madeira (above), CEO of the Oakland-based East Bay Asian Local Development Corporation, agreed that a range of measures will be needed, including rezoning land now used for public purposes.

Piedmont leaders are staring down a formidable task in figuring out how the city will accommodate almost 600 new housing units in the next decade as part of a regional housing plan.

And during a community workshop over Zoom Tuesday night, 70 participants talked about and listened to strategies to make those numbers a reality. No one was under the illusion it would be easy, or that anything less than supreme creativity will be needed to overcome major obstacles, including a dearth of “vacant” — unused for any purpose — parcels of land in this small, mostly built-out city.

Andy Madeira, CEO of the Oakland-based East Bay Asian Local Development Corporation, told attendees of Tuesday’s  “Doing Our Part: Affordable Housing in Piedmont” workshop that, if Piedmont is going to host sizeable multifamily structures, that the city will have to rezone some land now used for public purposes — parks, for instance —  for such housing projects. Also, “building up,” apartments over existing commercial spaces or community centers, or even perhaps over the soon-to-be-built aquatic center buildings, should be options to be investigated.

“The possibilities do exist,” Madeira told attendees of Tuesday’s workshop, which was sponsored by the Piedmont Racial Equity Campaign and by the League of Women Voters of Piedmont.

Piedmont is underway with preparations for the sixth Association of Bay Area Governments’ Regional Housing Needs Allocation cycle, which covers 2023 through 2031. Every Bay Area city has been given a mandate for accommodating new housing units, and a number for such units it should plan for. Piedmont’s number is 587 new residences during that time period to add to the region’s housing stock – almost 10 times the number the city was mandated to prepare for in the fifth RHNA cycle, from 2015 through 2022. The city has to present its 2023-2031 plan, it’s “housing element,” by January 2023.

Panelists on Zoom Tuesday night said Piedmont will likely have to depend on a variety of measures to reach that 587 number. Many of them, they said, could depend on local, state and federal subsidies (available through various channels) to help pay for single-family houses to be split into two or more housing units, or for other housing development. Rezoning city-owned land, including parks (Blair Park was specifically mentioned as a potential site) for multifamily housing may well come into play, as well.

But building a housing complex specifically for people who work in Piedmont — city workers or teachers, for instance — and who couldn’t typically afford to live in the city would likely run afoul of state housing laws, Madeira said.

For part of Tuesday’s workshop, participants were broken into small groups, which were tasked with discussing how Piedmont could achieve the magic “587” number. Those in one breakout group found out quickly that options are limited, expensive and potentially time-consuming. Accessory dwelling units, which the city has encouraged as a way to increase housing stock, aren’t always rented out as separate residences. And cities don’t have the power to compel homeowners to rent out those ADUs.

But the Piedmont City Council has been forthright in declaring the importance of making the new housing numbers reality however it can, not only to meet regional housing mandates but to help make this city — long mostly high-income and mostly white — more inclusive racially and socio-economically. Local groups like the Piedmont Racial Equity Campaign have also been at the forefront of that effort, which they acknowledged Tuesday is a separate, if complimentary, mission from the city’s quest to meet the state mandates.

That Piedmont needs to do more to be a more inclusive community was driven home Tuesday night by Madeira, who said he looked up the most current rental units listed on Zillow. Eleven of the 12 rental units listed were going for anywhere from $2,200 to $7,500 a month, beyond the financial reach of most renters even in the “moderate-income” category, which in the Alameda/Contra Costa County area tops out at $115,080 a year.

State Assemblywoman Buffy Wicks, D-Oakland, challenged Tuesday night’s workshop attendees to “get connected” with the housing issue (going to fairhousingelements.org is a good start, she said) and to “speak up,” and tell elected officials like herself about local issues. It’s the local people, she said, who know what the local needs, problems and potential solutions are.

The next City of Piedmont housing-related event is Thursday, Dec. 2, with Piedmont Housing Element Update Workshop No. 1, from 5:30 to 8 p.m.