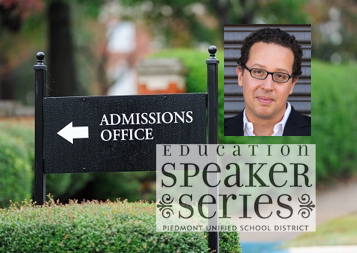 Hosted by Piedmont Education Foundation’s 2021-2022 Speaker Series, New York Times Money columnist and author Ron Lieber spoke to parents and students about the complexity of college admissions and the “emotionally fraught” financial decisions they entail. While deconstructing how to determine the best undergraduate programs, merit aid plans, and higher education institutions available, Leiber also touched on deeper matters, such as a family’s definition of success and whether or not a child graduating from high school should attend a university or college at all.

Having had to rely on scholarships throughout his own educational career, Lieber discovered firsthand the value of wise financial aid advice and the importance of understanding the system on which he depended. Lieber’s first book, The Opposite of Spoiled: Raising Kids Who Are Grounded, Generous, and Smart About Money, was released in 2015 and went on to become a New York Times and Wall Street Journal bestseller. His new book, The Price You Pay for College: An Entirely New Roadmap for the Biggest Financial Decision Your Family Will Ever Make, was published by HarperCollins in January 2021.

Throughout the discussion, Lieber remained emphatic on one point: It should not be so hard for parents and students to figure out what to pay for higher education. He talked about the black box of how institutions structure their merit or need-based aid. While need-based aid relies on data and income levels, merit aid can be differently applied from one institution to the next. Other factors families should understand — and which can be confusing to parse from one college to the next — include what value is placed on test scores, and the role of diversity, parents’ incomes and other factors determining admission.

Amid all the advice and pointers related to applications and aid, Lieber reminded the audience that the most basic question to be answered first is the one about whether or not a student should attend college at all.

Why go to college

Learning, kinship, and credentials are worthwhile reasons to go to college. Lieber presented specific examples of three very different schools (Wooster College, Amherst College, and the University of Florida) at which those three pillars are exemplified and fulfilled. He offered specific tips about questions to ask aid and admission offices, and highlighted resources for accurate, reliable information.

Lieber emphasized defining the meaning of success and how much income or what kind of career path best suits each family and every individual child. After considering the importance of friendships and network building, happiness, diversity in experience, career aspirations, and other priorities, he returned to his by-now familiar theme that “people are entitled to a lot more information (from colleges) when making a six-figure financial decision.”

Given the perceived stakes, the process can get overly fraught for families. Lieber distilled his insights to three things that might stir up panic and interfere with the ability to make good decisions based on careful homework and facts: fear, guilt, and snobbery.

Recognizing those trigger points is largely a matter of self-reflection and resolving to avoid getting trapped by fear, guilt, or missing information and resist being motivated by false pride.

Ask — and ask AGAIN — for the data

Lieber said the system will only improve if parents and students continue to politely and firmly demand greater access to data, alumni reports, and other information. If you don’t know enough to make the crucial decisions involved in selecting, funding, and having a child attend college, ask. Then steadfastly ask again until the answers arrive.