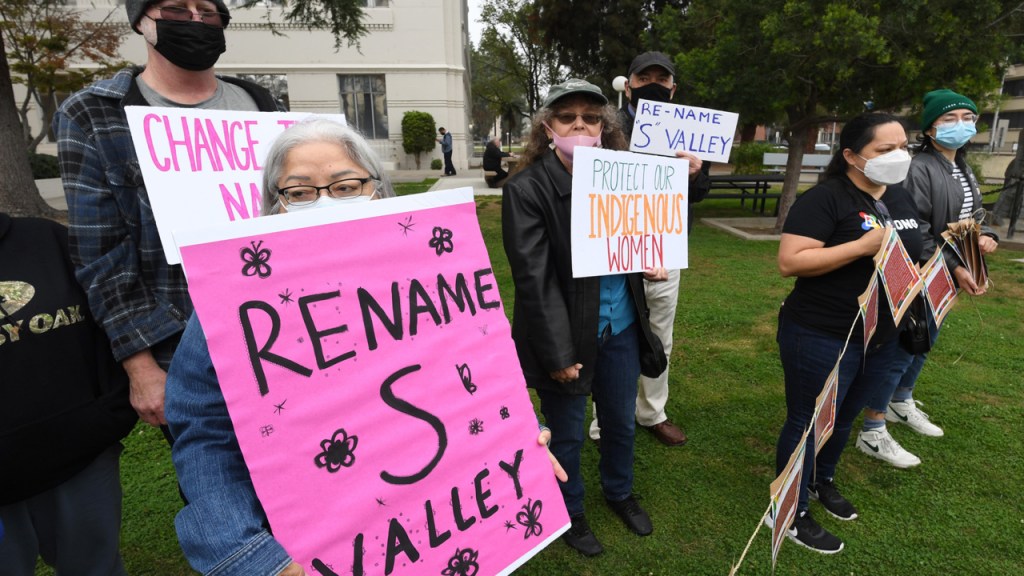 Supporters of the movement to change the name of Squaw Valley gather in front of the Hall of Records, before the Fresno County Board of Supervisors meeting Nov. 16, 2021. Photo by John Walker, the Fresno Bee

Over a year after launching an effort to rename the community of Squaw Valley, a group of about 15 protesters gathered in downtown Fresno to urge the Fresno County Board of Supervisors to change the name that many argue is racist and misogynistic.

Multiple people spoke out during this week’s board meeting, which at times turned tense and ended with the group’s leader escorted from the meeting by police.

Coalition leaders say they have received inconsistent messages and a lack of cooperation from county leaders on how to go about initiating the name change.

However, Supervisor Nathan Magsig, who represents the region, has said that a name change must come from Squaw Valley residents themselves.

The coalition — including local tribal members, Squaw Valley residents, along with representatives from Fresno State, ACLU of Northern California, and Faith in the Valley — says it does have community support.

“It’s really important that the board recognize when it’s time to hear our community members’ concerns about the detrimental effects of this name,” said Linda Tubach, a Squaw Valley resident for over 30 years.

Last summer, Roman Rain Tree, a member of the local area Dunlap Band of Mono and Choinumni tribes, started the initiative to change the name, saying that Squaw Valley was offensive to Indigenous people in the region.

Squaw Valley is a census-designated place in Fresno County. There are over 3,500 residents, according to the latest census data.

In a January Facebook live, Magsig addressed the renaming topic and said that “it will remain Squaw Valley until the community decides that it should be changed.”

Rain Tree has since collected over 18,000 signatures on a Change.org page, has spoken on various panels with Fresno State and with ACLU, and has recently started a Facebook page with more than 200 followers, including many Squaw Valley residents.

Rain Tree said Magsig hasn’t accepted a meeting to discuss the idea of a name change and said he feels like he isn’t being taken seriously.

“He’s been moving the goalposts back,” said Rain Tree, who said the supervisor initially told him to propose a name, get a petition, and hold a meeting. “We did all that,” said Rain Tree.

During public comment, Rain Tree turned his back to the supervisors while he spoke, which he said was how he felt the board was treating them.

“This is how you guys make us feel,” said Rain Tree.

In response, board President Steve Brandau said, “get this guy out of here” and had Rain Tree escorted out of the meeting.

Squaw Valley resident John Johnson spoke in support of the name change and asked supervisors to place an item for discussion at a future meeting and hold a public hearing.

“You drive on Highway 180, and there’s a giant green sign with that name on it. We’re publicizing to residents of the county, the state, the country, to lots of foreign nationals that come here (to visit the national parks), a word that is offensive,” said Johnson in an interview with The Bee.

“The county of Fresno is represented by that sign,” said Johnson. “So I believe that it is well within the purview of this board.”

Johnson said he thinks that if more Squaw Valley residents understood what the word meant, they would be more likely to support the name change.

Fresno County resident Cintia Quesada said that there is power in words and the stories they shape, and the board has the opportunity to change the legacy of the community’s name.

“Stories shape our legacy and our lives and experiences,” said Quesada, who prefers they/them pronouns. “The legacy of the current name of S Valley is rooted in dispossession and discrimination. What will be your legacy?” Quesada asked the board.

They also distributed 25 public comments from residents that could not attend in person.

Only one public speaker present asked the board to keep the name.

Why is the name offensive to native people?

“The term is a derogatory word that shows up on US Census and marriage records, where Native American women and girls are not represented by their names, but where the term ‘squaw’ is in its place,” said Leece M. Lee-Oliver, assistant professor of gender studies and American Indian studies at Fresno State.

“The term, for those hoping to find a way to keep it, is often mis-associated with Native American languages and assumptions that the term means “young woman” or teenage girl,” said Lee-Oliver in an email statement to The Bee. “Many scholars, including Linguists, Historians and Native Americanists, have long-since dispelled these claims, but the power of those who are resistant to support the name changes is shown in their continued claim that the definition stands no matter the counter arguments.”

Tedde Simon, a Navajo woman and the Indigenous Justice Advocate of the ACLU of Northern California, attended Tuesday’s rally.

She said the ACLU supports the name change because the term squaw is a “horribly racist and misogynistic word that just shouldn’t be in our vocabulary.”

“We use names to honor things and celebrate things and lift things up,” Simon said in an interview with The Bee. “Centuries of genocide against Indigenous people, and especially Indigenous women, girls, and Two Spirit people, it’s not something that we should be celebrating.”

Rain Tree said that he and his coalition is trying to educate the public and the supervisors on why the term is offensive.

“Where are we failing in educating you that you cannot connect the dots?” said Rain Tree. “We’re feeling like we’re connecting the dots for you, but somehow, you’re still not seeing it as the C-word, somehow you’re not seeing it as this violent attack that perpetuates the murdered and missing Indigenous women crisis in America.”

Another Squaw Valley resident commented that even the Merriam-Webster dictionary lists squaw is an offensive, dated term.

Supporters pointed out that there is precedent for changing the name, such as the recent decision to change the famed Tahoe-area ski resort from Squaw Valley to Palisades Tahoe.

Similarly, in 2008, the state of Arizona changed the name of one of the largest mountains in the Phoenix, from Squaw Peak to Piestewa Peak. The new name is for Lori Piestewa, a Hopi and Mexican-American soldier from Arizona who was killed in combat in Iraq in 2003.

Rain Tree said that there is also precedent to change the name locally. In 2003, the Bureau of Land Management changed the name of the local management area from Squaw Leap to San Joaquin River Gorge.

The initiative to change the name of Squaw Valley comes at a time that many efforts are underway to change place names, school mascots, and school names that have been shown to cause mental harm to Indigenous people.

Lee-Oliver, the Fresno State scholar, said that these decades-deep initiatives to change names are important “because positive associations do the opposite of harm — they build good senses of pride, self love, and wellness, and belonging into our community and nations.”

“We want our younger generations to experience that sense of value along with all of our other community members.”

During the meeting, some expressed support of the name Nuum Valley, which means “the people” in the Mono language.

In a proposed resolution, the group has also suggested the name change to “Bear Mountain Valley,” a name that is “a known established alternate name referenced, embraced, and supported by residents. A few businesses and institutions in the Squaw Valley region are already named after the nearby mountain, such as Bear Mountain Pizza, Bear Mountain Library and Bear Mountain Doodles.

Melissa Montalvo is a reporter with The Fresno Bee and a Report for America corps member. This article is part of The California Divide, a collaboration among newsrooms examining income inequity and economic survival in California.