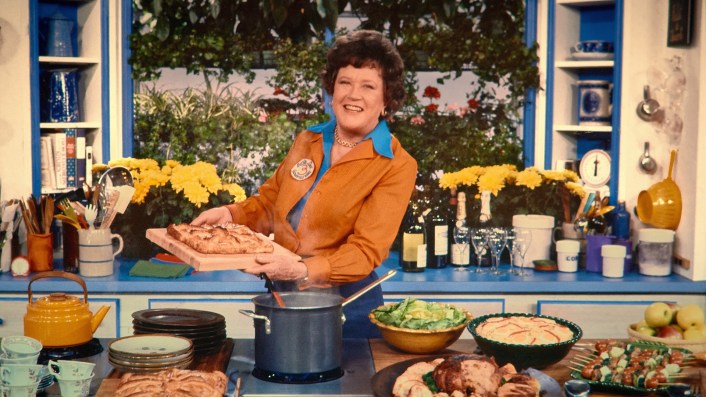 “Julia” is a joyous look at trailblazer Julia Child, who wasn’t afraid to change her mind. (Photo courtesy CNN Films)

Within its tight timeframe of four days, the annual Doc Stories program pulls off one gargantuan feat, showcasing a cluster of the finest documentaries of 2021.

Part of SFFILM, this small but mighty nonfiction connoisseur collection delivers 17 choice features and is poised to host four livestreamed talks. Two San Francisco venues (the Castro and the Vogue) will screen key titles with many being made available for online viewing.

One of the hottest tickets is Doc Stories’ Centerpiece pick, “Summer of Soul (…Or, When the Revolution Could Not Be Televised).” Director Ahmir “Questlove” Thompson will take the Castro stage for a Q&A after the 8 p.m. Saturday screening of his electrifying Sundance Film Festival winner, which is both a tribute to influential Black musical performers as well as thoughtful commentary on the underreporting of the 1969 Harlem Cultural Festival. It’s a joy and demands to be appreciated as a communal experience.

The festival ends at 8 p.m. Sunday at the Castro with directors Dave Wooley and David Heilbroner’s “Dionne Warwick: Don’t Make Me Over,” a candid look into the intriguing life of the “Do You Know the Way to San Jose” singer. Wooley plans to attend, and the film will also be available to stream.

This week’s Pass the Remote takes a quick look at a few of the unbeatable options in the lineup.

Nelson’s “Attica” is a shattering, topical and damning portrait of racism and how it fueled the horrific outcome in the U.S.’s largest prison revolt. “Attica” is meticulously researched and a devastating historical account of the New York September 1971 prison uprising in which mostly Black and Brown convicts demanded much-needed reforms after they took guards hostage. Nelson draws heavily on a stunning array of archival images and footage and then interviews former prisoners, relatives of the guards and journalists amongst others to take us through those five perilous days that left 29 inmates and 10 guards dead. It covers the topic from various perspectives and leaves you hollowed out at the end. Nelson is slated to attend the 7:30 p.m. Thursday screening at the Castro. It debuts Saturday on Showtime.

Another documentary gaining awards buzz is Jessica Kingdon’s impressionistic Gotham Award nominee, “Ascension.” Set in China, Kingdon drops in and out of various workplaces and spaces, showing us a spectrum of low-wage workers and on to high-wage earners. It’s illuminating, fascinating and gives an honest, composite picture of China unlike many of us have seen before. Kingdon is slated to attend the 8 p.m. Friday screening at the Castro.

Parents of teen girls who happen to catch Parker Hill and Isabel Bethencourt’s “Cusp” will not only feel uncomfortable but also want to have a serious talk with their daughters right afterward. Raw, candid and shocking, it shadows three tough but vulnerable teens — Brittney, Aaloni and Autumn — as they live, love and experiment often with bad boys and drugs in a small Texas military town. It’s a wake-up call that takes a fly-on-the-wall approach. It’s evocatively photographed and provocatively told. Don’t miss it. Bethencourt and Hill will attend the 3:30 p.m. Saturday screening at the Castro. Expect it to inspire numerous questions.

In case you missed “RBG” filmmakers Betsy West and Julie Cohen’s flavorful CNN documentary on Julia Child, take stock of this. “Julia” is being shown for free at 6:30 p.m. Saturday at the Vogue Theatre. Featuring sensual shots of food along with vintage clips from Child’s landmark PBS cooking show, it gives us insight on this entrepreneur who could admit that she wasn’t always right. West and Cohen are slated to attend.

If you want to see the documentary get pushed into exciting new directions, there’s no place better to witness that happen than buying a ticket to “Flee.” Director Jonas Poher Rasmussen uses mostly animation to relate a gay Afghanistan refugee’s extraordinary plight. All of Rasmussen’s choices work in the poignant story of a man without a home as he’s about to build the foundation with another man. It’s won a number of awards already, and it might just land in the best animated feature and the best documentary categories. Rasmussen is expected to attend the 4:30 p.m. Sunday screening at the Castro.

San Francisco — and the East Bay — figure prominently in San Francisco filmmaker Jon Shenk and Pedro Kos’ three-year exploration of unhoused communities in the City by the Bay along with Los Angeles and Seattle. The 39-minute “Lead Me Home” relates the reality of living in a car or a tent while most residents go through their everyday lives nestled in homes and apartments. With its long, slow overhead camera shots of the unhoused living along long stretches of streets coupled with the wrenching, tearful testimonies, it shows a failure of humanity to care for its own in cities across the United States. Shenk, who co-directed with Bonni Cohen “Audrie & Daisy” and “Athlete A” (a must watch on Netflix), and Kos are slated to attend the 5:30 p.m. Friday Castro screening. A free online discussion centering on pertinent Bay Area issues — “Finding Home: Seeking Remedies for a National Crisis” — takes place at 1:30 p.m. Sunday. Be sure to RSVP.

Another buzzy documentary with Bay Area connections is “Simple as Water.” Oscar-winning filmmaker Megan Mylan, former guest director of the documentary film program at UC Berkeley, takes a mindful approach to illustrating what happens to Syrian refugees as they try to establish roots elsewhere. It is available to stream throughout the festival’s run.

For tickets and a full program, including special scheduled talks, visit https://sffilm.org/year-round-programming/doc-stories/.