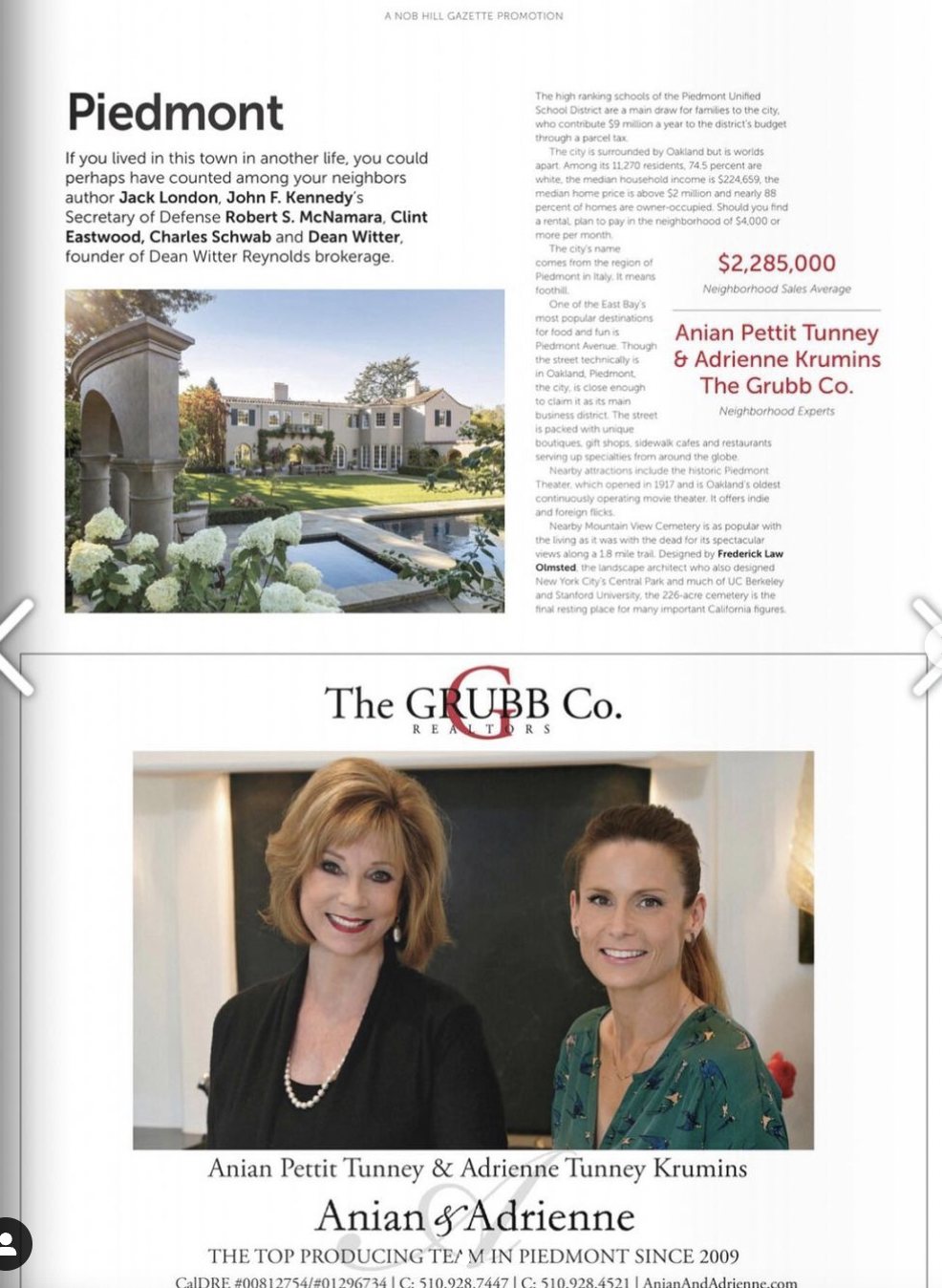 A real estate “advertorial” in this month’s Nob Hill Gazette played into old stereotypes of Piedmont in a manner that both shocked and angered some residents in town who quickly took to social media to call out the publication — and the realtors who took out the ad.

The page in question promoted Piedmont as a desirable place to live by noting that “The city is surrounded by Oakland but worlds apart,” and “Among its 11,270 residents, 74.5% are white.” Piedmont has a history of redlining –a practice common in the Bay Area and around the country prior to the passage of the Fair Housing Act of 1968 that sought to keep people of color from purchasing homes in white neighborhoods.

The page was sponsored by the Grubb Co’s Anian and Adrienne Tunney. The accompanying copy was written by a freelance writer for the Gazette, according to the magazine’s publisher.

The magazine took full responsibility for the error. “Advertising copy in the November issue of the Nob Hill Gazette used U.S. Census data to create an offensive and insensitive characterization in relation to the city of Piedmont,” it said in a statement. “The Grubb Company had no role in the creation of this language. Nob Hill Gazette accepts full responsibility, apologizes for the error, and is taking steps to ensure nothing like this happens again.”​

In response to the blowback, the Gazette’s publisher, Clint Reilly, apologized to ABC7 news reporter Kate Larsen in a phone interview on Thursday. “I grew up in the East Bay and I think it’s very unfortunate that wording appeared in the publication. It’s inappropriate and wrong. It does not reflect the values of the Gazette or my own family,” he said. (Read the ABC7 story HERE.) Reilly told the reporter that the publication will not be working with the freelancer who wrote the piece again.

Sam Singer, a spokesperson for the Grubb Co said “[the company’s] agents are appalled at the language and had nothing to do with creating the copy. Anian Tunney and Adrienne Krumins are longtime Piedmont residents and feel the citizens of Piedmont and Oakland have been disrespected” with this representation.

The Gazette’s media kit for potential advertisers promises to “Know your audience. Not just as a demographic. Not just their zip codes. Not as a faceless archetype. Know the people. Understand them and the ecosystem they inhabit. Build decades of credibility. Stay fresh. Stay relevant. Surprise and delight your readers.”