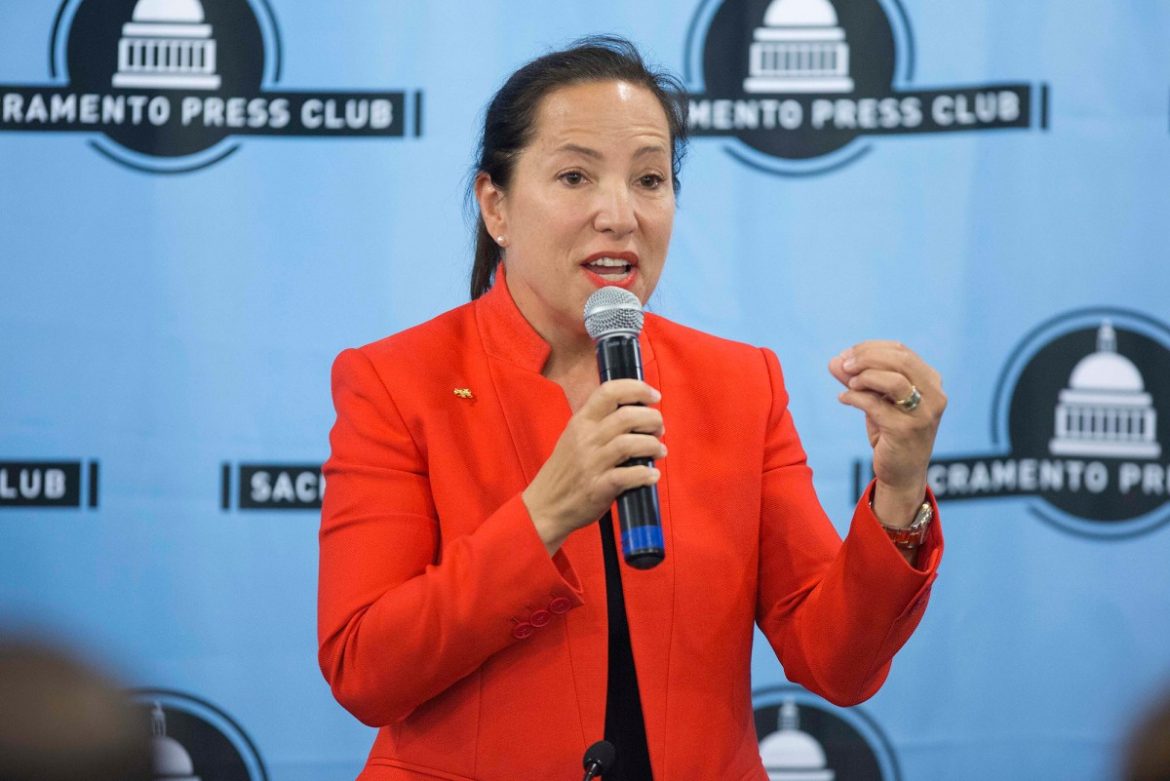 Then-Democratic candidate for Lt. Governor Eleni Kounalakis during a debate sponsored by the Sacramento Press Club in Sacramento on April 17, 2018. Photo by Steve Yeater/AP

What a week it’s been for Lt. Gov. Eleni Kounalakis.

On Tuesday, she took the stage for two panels at the United Nations climate change conference alongside President Joe Biden’s national climate advisor, governors and business executives — just four days after Gov. Gavin Newsom abruptly cancelled his trip to Glasgow, Scotland and announced that Kounalakis would lead the California delegation in his place.

That’s not a lot of time to prepare for a high-stakes international trip — and the weather didn’t make things any easier.

In conversations with Kounalakis and her chief of staff on Tuesday, I learned that their plans to travel by train from London to Glasgow on Sunday were derailed — quite literally — by a storm-uprooted tree knocking out the power lines for the only direct rail link between the two cities. So they made the 7-hour drive instead.

Kounalakis, who plans to leave Glasgow on Thursday, told me that her schedule is materially the same as what the governor’s would have been: four panels — including one today with U.S. Climate Envoy John Kerry and the governors of Louisiana and New Mexico — a tour of an electric bus transportation hub and numerous meetings.

She also emphasized those points in one of her Tuesday panels, asserting that “California has been the tail that has wagged the dog on environmental protection.” As an example, she cited Newsom’s order to ban the sale of new gas-powered cars by 2035, noting, “We are the largest consumer market in the United States, and this standard is most certainly already shaping the future.”

When New Mexico Gov. Michelle Lujan Grisham asked Kounalakis how California handles climate change skeptics, Kounalakis suggested that wasn’t the Golden State’s primary concern: “For Californians, I think that the bigger question is, if we do our part, will the rest of the country follow and the rest of the world follow? And frankly, that’s why I’m in Glasgow, that’s why we have one of the largest delegations we’ve ever had … of officials from California,” she said.

Still, cracks stemming from Newsom’s last-minute cancellation were apparent. Lujan Grisham initially referred to Kounalakis as the lieutenant governor of Hawaii, and Gina McCarthy, Biden’s national climate advisor, said the audience was “looking at three governors who have the courage to actually set the pace for change in the United States of America.”

And public details about Kounalakis’ schedule were initially scarce: Although Newsom’s office sent me her event lineup on Tuesday in response to a media inquiry, the only place I could find information about her schedule before that was an Oct. 31 press release from the New Mexico governor.

Limited information has been a consistent theme in the Newsom administration’s handling of the conference: Reporters weren’t informed that he would be attending until nine days after the deadline to apply for a press credential, and the governor has not elaborated on the “family obligations” that prompted him to cancel his trip.