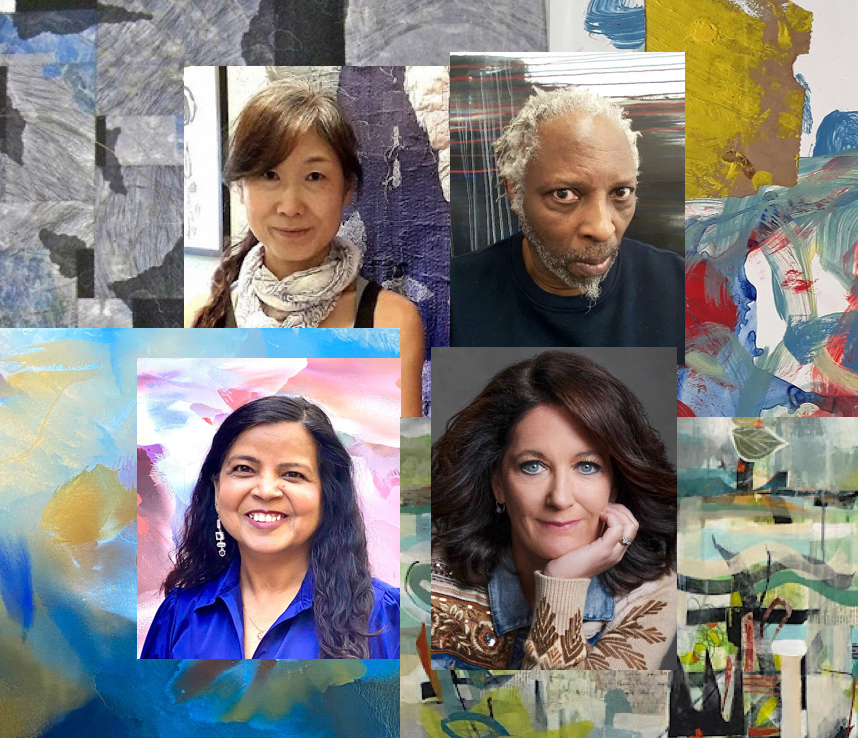 Robert Frost’s poem ‘A Boundless Moment’ was the inspiration in 2019 when four East Bay artists decided to plan a group show at the Piedmont Center for the Arts. With the show then scheduled for May 2020, the artists began their preparations. But in March 2020, only two short months from the opening of their special show, life would change suddenly and completely. How could they have predicted that Frost’s lines would be even more poignant: ‘We stood a moment so in a strange world’? At that moment, as the poet would have it, the artists learned along with everyone else that things would be different going forward.

He halted in the wind, and – what was that
Far in the maples, pale, but not a ghost?
He stood there bringing March against his thought,
And yet too ready to believe the most.

‘Oh, that’s the Paradise-in-bloom,’ I said;
And truly it was fair enough for flowers
had we but in us to assume in march
Such white luxuriance of May for ours.

We stood a moment so in a strange world,
Myself as one his own pretense deceives;
And then I said the truth (and we moved on) .
A young beech clinging to its last year’s leaves.

Fast forward nearly two years later and these four artists are humbly thankful to have emerged from the pandemic with art practices renewed, refreshed and strengthened. In the rescheduled show, professional artists Colleen Gianatiempo, Carl Heyward, Usha Shukla and Akiko Suzuki will bring an impressive and thoughtful range of art to the Piedmont Center for the Arts.

In describing how the experience of the pandemic has affected their art practice, each artist referred to a period of existential crisis which in turn prompted the realization that making art was the key to reclaiming their lives. Shukla puts it succinctly, ‘After a few months, I realized that my art is my saving grace, and I cannot be myself until I create’.

As in Frost’s line ‘A young beech, clinging to last year’s leaves,’ they each recognized the need to move past prior studio practices and to incorporate new ideas into their work. Suzuki, who moved to the United States from Japan in 2019, found her textile arts practice particularly affected by pandemic travel restrictions and has been gradually incorporating more locally sourced materials.

Adaptability has been a key characteristic for each artist in their studio and art business practices.  With galleries closed for in-person experiences, classrooms moving to online platforms, and travel restrictions affecting the ability to attend art residencies and making it difficult to procure materials, Gianatiempo, Heyward, Shukla and Suzuki have each thought deeply about why and how they make art.

As for how they wish viewers will experience the show ‘A Boundless Moment’, Heyward and Suzuki are hoping for a ‘what is this?’ moment when surprise and excitement will stimulate imagination and understanding.

As Gianatiempo thinks about Frost’s poem in relation to the show, and to life before, during and after the pandemic, she imagines the single moment when life has changed. As in nature, life is cyclical and ever changing.

In addition to showing their own work, the artists will be presenting some collaborative pieces; a way to continue moving the artists outside their comfort zones in order to create something even more interesting and exciting.

Dates of the show:  ‘A Boundless Moment’

Images are courtesy of each respective artist