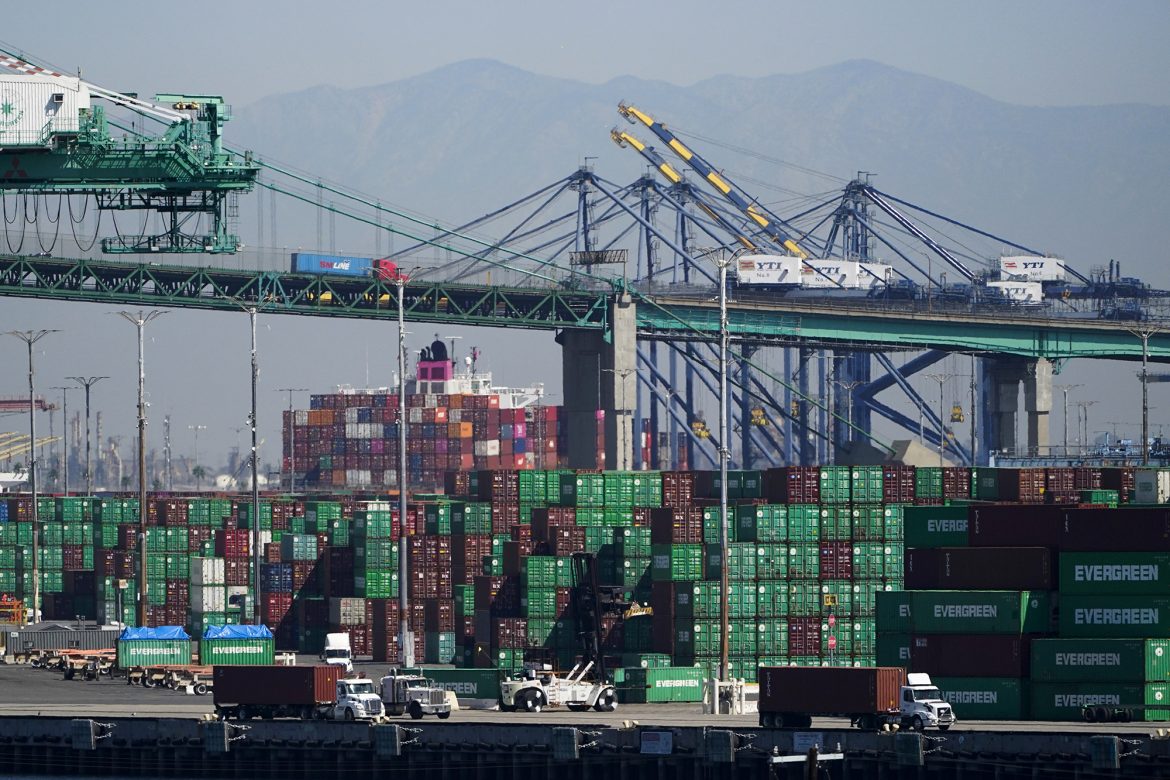 Containers are stacked at the Port of Los Angeles in Los Angeles on Oct. 1, 2021. AP Photo/Jae C. Hong

The Port of Oakland has brought on hundreds of new workers to deal with congestion. But now many are regularly without work as ships continue to head south despite the huge pile up in Los Angeles and Long Beach.

“The ocean carriers seem to be bypassing the ports in the Bay Area and stacking up ships in Southern California,” said Trent Willis, president of the International Longshore and Warehouse Union branch in San Francisco.

“A lot of the workers we have trained are not working,” said Willis. “We’re ready to work.”

The massive increase in consumer spending and the disruptive impact of the COVID-19 pandemic has distorted global trade. Retail stores around the U.S. are experiencing issues getting in supplies, with concerns shoppers won’t have goods for the upcoming holiday seasons.

“The majority of those goods comes from overseas,” said Korwatch.

President Joe Biden announced Oct. 13 that “the Port of LA will begin operating around the clock 24/7 to make sure Americans can get the goods they need.”

But the story at the Port of Oakland has been different for the past few months, after experiencing congestion earlier in the summer.

“Workers are frustrated. We told them the reason we were going on this mass training program – it was in anticipation of ships calling the port,” said Willis.

The San Francisco Bar Pilot’s Association, which dispatches small boats that help navigate cargo vessels through the Bay Area and depends largely on services to the Port of Oakland, is also worried about the lack of ships.

Anne McIntyre, business director for the San Francisco Bar Pilots Association, estimated that they’ve seen a drop of 25 percent drop in the number of ships in 2021 compared to 2019.

“It’s been really tough,” said McIntyre. “The number of ships that are calling in the Bay Area right now are at a record low.”

The port authorities at Oakland are expecting activity to increase in the coming weeks and months after persuading more cargo ship companies to come. Earlier this year, the Port of Oakland secured four new first port of call services, meaning some cargo ships will now come to the Bay Area first to unload their goods.

Traffic jam in the Pacific Ocean

Most cargo ships heading to America’s West Coast call first at the much larger Southern Californian ports because they serve a bigger population than Oakland and are better connected to other parts of the country by freight.

“Carriers give the priority to the most important port. That is usually the biggest port,” said John McCown, a shipping expert at Blue Alpha Capital.

As such, Oakland Port is not experiencing similar backlogs seen elsewhere at major hubs around the world.

The Port of Oakland has added new cranes and technology to process more trade.

At a Port of Oakland board meeting in mid-September, officials raised another issue: cargo ships were choosing to head back to Asia after off-loading in southern California to save time, instead of heading to Oakland to make another stop.

“The lines are deciding to route the majority in and out of Long Beach,” said Brian Brandes, maritime director at the Port of Oakland. ”And then right back to Asia.”

“They don’t want to incur additional delays and bring them up to Oakland,” he added at the meeting. “This will be changing.”

A trade route from Asia has been restored in October to the Port of Oakland, after leaving in 2019.

The port is bracing itself for a busy couple of months ahead.

“We will likely see more cargo coming through Oakland by the end of October.” A new service will be running from China to Oakland in the next few weeks, for example.

That’s positive news for Willis, who says that his longshore workers are ready for the job.