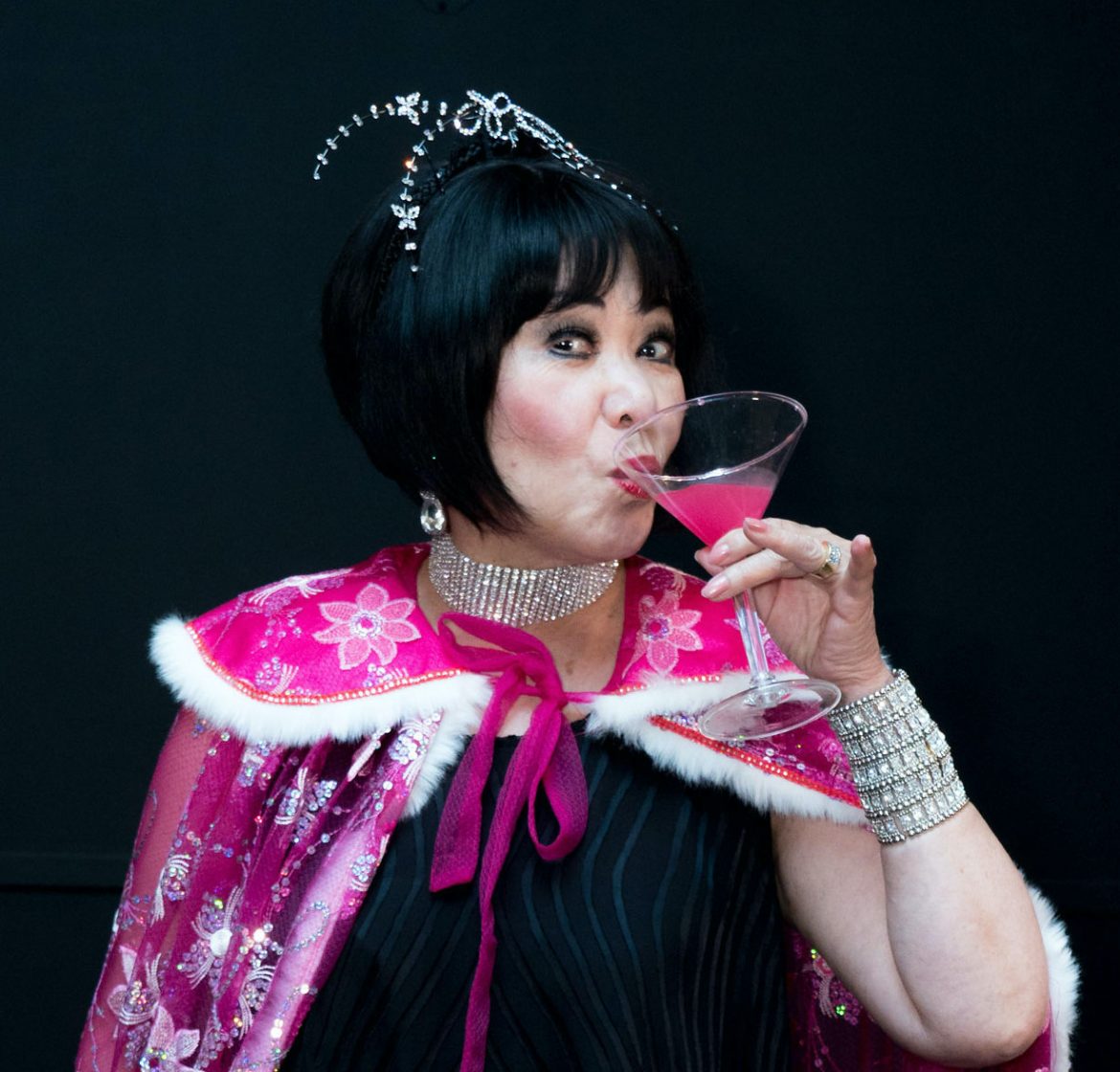 Tour guide and burlesque dancer Cynthia Yee is at the center of Marc Pomerleau and Awesome Theatre's documentary "Empress Yee and The Magical History of Chinatown." (Photo courtesy Horatio Jung)

“I think people come to Chinatown because they expect a Disneyland atmosphere,” Cynthia Yee says. “When they see it’s just a neighborhood, a community with restaurants and daily life, they wonder.”

Yee is a tour guide with the award-winning Chinatown Magic Tours, but she was once herself at the center of the spectacle. At 17, Yee was invited by legendary Japanese American dancer Dorothy Toy to join Toy’s traveling showgirl troupe.

For years, Toy and Yee lived in the same building, passing one another as strangers in their shared lobby. As a young girl, Yee took ballet lessons, admiring the formidable Toy from afar.

“Kids would be playing in the lobby, and we’d see glamorous Dorothy with a nice makeup bag and a pair of toe shoes walking up and down when she was home from tour,” Yee recalls. “She was my role model.”

Evidently, Toy noted Yee’s ballet lessons. When one of Toy’s dancers fell ill in 1963, she knew who to call.

“I was right out of high school on summer vacation when she called my Mom,” Yee says. “I went down the next day to see Dorothy, we tried out a few dance steps and the rest is history.”

So emerged the legacy of Empress Yee.

In 1960s Chinatown, the night was alive with performers and dancers from all walks of life. “When I joined the show, the amateur strip contest was the most popular thing,” Yee says. “Every Thursday night, we’d have an amateur strip contest at the Chinese Sky Room. It would fill the place.”

However, the popularity of burlesque in San Francisco would not last long, as the advent of strip clubs drew eyes elsewhere.

“Burlesque is a little bit of a different art form,” Yee explains. “It’s very artistic, and there’s a storyline. The strip clubs on Broadway at the time did not have anything like that. In fact, they came out topless, bare-bodied. There was no stripping involved. There was no art.”

Strip clubs were not entirely to blame. “It was a whole combination of elements that so-called killed the business,” Yee says. “[Music unions] were very strong, and it was very expensive to hire union help at that time.”

In addition, “more people stayed home, television became a big thing, and [Chinatown nightlife] was very different from what it was starting in the 1940s or so,” she recalls.

Chinatown’s showgirl troupes may have been lost to a society in flux, but they have not been forgotten. In July of this year, Chinatown historian Marc Pomerleau released a documentary with Awesome Theatre called “Empress Yee and The Magical History of Chinatown.”

In addition to her history as a dancer, the documentary covers Yee’s more recent projects. Hoping to “relive Chinatown,” Yee founded the Grant Avenue Follies, a group of senior dancers who raise funds for senior citizen groups through performance. “We love to entertain other seniors that can’t go out anymore,” Yee says. “They just love it when they hear the music and see us dance.”

Eighty percent of Grant Avenue Follies members are retired teachers, living out a dream deferred. “I never knew this, but many of the teachers always wanted to be dancers,” Yee says. “They always wanted to wear all that bling and those feathers. They’re having the time of their lives.”

The Follies’ choreographers include Miki Novitski and Bruce Biada, two well-established dancers in their own right. “[Novitski] knows that we cannot do certain steps, so she choreographs accordingly,” Yee says.

Of course, glamour also plays an important role in recreating “Chinatown’s golden nightclub era” of the ’40s and ’50s. The Follies’ original costume designer was Chuck Gee, designer in the days of the Chinese Sky Room and Forbidden City. “We love bling,” Yee says with a laugh.

When racially charged stigma towards Chinatown and its inhabitants surged in 2020 during the COVID-19 pandemic, the Follies sought to create a response to the racism. “Clara Hsu, executive director of the Clarion Performing Arts Center, and I were having dinner together,” Yee remembers. “I said, ‘What could we do as the elders? We are entertainers. What can we come up with?’”

It was Hsu who reminded Yee of the gai mou sou. “The gai mou sou is a feather duster,” Yee explains. “Grandma would dust the furniture, but she’d also turn the duster around, and that’s how she would always warn the children, ‘You better mind, otherwise you’re gonna get a little pink bottom.’”

Inspired by this disciplinary tool, Hsu wrote a rap for the Follies to perform. Since its release, the Follies’ “Gai Mou Sou Rap” has garnered more than 80,000 views.

Pomerleau’s documentary also features the Rice Rockettes, “San Francisco’s premier Asian & Pacific Islander drag queen troupe.” The Rockette’s dazzle in elaborate costumes and accessories, a natural extension of showgirl glamour. “[The Rockettes] are coming back to Chinatown,” Yee says. “I think it’s time that our community opens up to the gay community.”

It’s clear that the pandemic hasn’t discouraged Yee in the slightest. When the Clarion Performing Arts Center was forced to shut down its music room to students, Yee erected The Showgirl Magic Museum in its place.

“I said, ‘Let’s bring back all the old costumes, and we’ll ask other people to donate whatever costumes and photographs they have!’” The Showgirl Magic Museum opened on Oct. 31, 2020, but was shut down the following day because of pandemic-related restrictions. It finally reopened on May 1 of this year, and has since been open every Saturday.

“I never got to college in the fall of 1963,” Yee reflects on her life with a smile.

“My education was with the Dorothy Toy Show, traveling the world.”