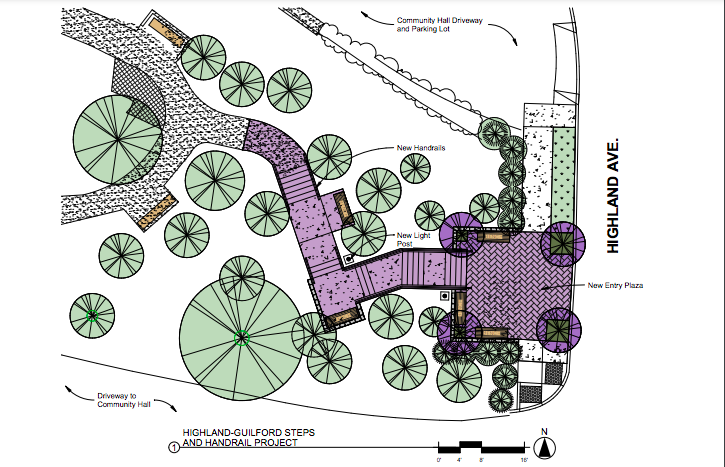 Contracts for two notable city projects were both approved unanimously on Monday, Nov. 15 by the City Council. They include pavement rehabilitation and pedestrian and bicyclist safety project work covering the west end of Oakland Avenue and the Highland-Guilford Steps on the eastern tip of Piedmont Park.

The council approved awarding the contract for the Oakland Avenue Pavement Restoration Project to GradeTech Inc., with its nearest facility in San Ramon, of $552,344.50. Also approved was an overall project budget of $739,579. Of that amount, $168,000 will come from the federal One Bay Area Grant program through Caltrans and the Metropolitan Transportation Commission. Alameda County Measure B transportation tax funds will also help pay for this work.

The council in September had approved soliciting bids for this work.

“Class 2” bicycle lanes, as marked by stripes and stencils, will be designated from the west end of the Oakland Avenue bridge west to the city limits. This work will comply with the city’s 2014 Pedestrian and Bicycle Master Plan.

Plans are for this work to start early next year, depending on the weather, and is expected to take about 10 weeks to finish, Public Works Director Daniel Gonzales told the council.

Despite concerns about the project’s high costs, the City Council also approved a $225,464 contract with Hercules-based HM Construction, Inc. to rebuild the Highland-Guilford Steps, and to install new handrails at this popular pedestrian spot on the eastern tip of Piedmont Park.

Among the planned improvements here are reconfigured colored concrete steps and landings with a non-slip “light broom” finish; decorative metal handrails on both sides of the steps and landings; and two LED ornamental light standards. There also will be a new sloped landing at the entrance off Highland Avenue. with a small pedestrian plaza made of permeable pavers which will allow surface run-off to percolate and recharge groundwater, additional commemorative benches and trees, a water-efficient drip irrigation system and native shrub plantings around the plaza.

In September and again Monday night, Gonzales told the council this project was accelerated after a Piedmont resident tripped and fell on the deteriorating wooden stairs last year, and was injured.

Much of the conversation around this subject Monday night centered on its cost. Councilwoman Jen Cavenaugh said this project will eat up years’ worth of parks improvement budget money. “I’m concerned it’s consuming all the resources” for other projects, she said.

But Gonzales said this is a high-priority project for a number of reasons, not the least of which is safety. And Councilwoman Betsy Smegal Andersen said the steps are a common way people can reach city rental properties adjacent to Piedmont Park, and that making that passageway as safe as possible is important.

The preliminary engineer’s estimate for the project was $154,728, much less than the $225,464 approved. Bids came in approximately 50 percent higher than anticipated, thanks largely to higher costs for concrete, stone veneer, handrail and the decorative lighting and electrical system.

Gonzales said costs for both of these projects were driven upward by various supply-chain issues and labor shortages that are affecting large segments of the national economy.

“All of these things are having an impact, and the general trend is that we’re seeing higher prices, despite having a large number of bidders” for these projects, he said.

And Councilwoman Conna McCarthy said that virtually every place to cut costs on the steps project involved potential safety compromises, which she couldn’t support making.