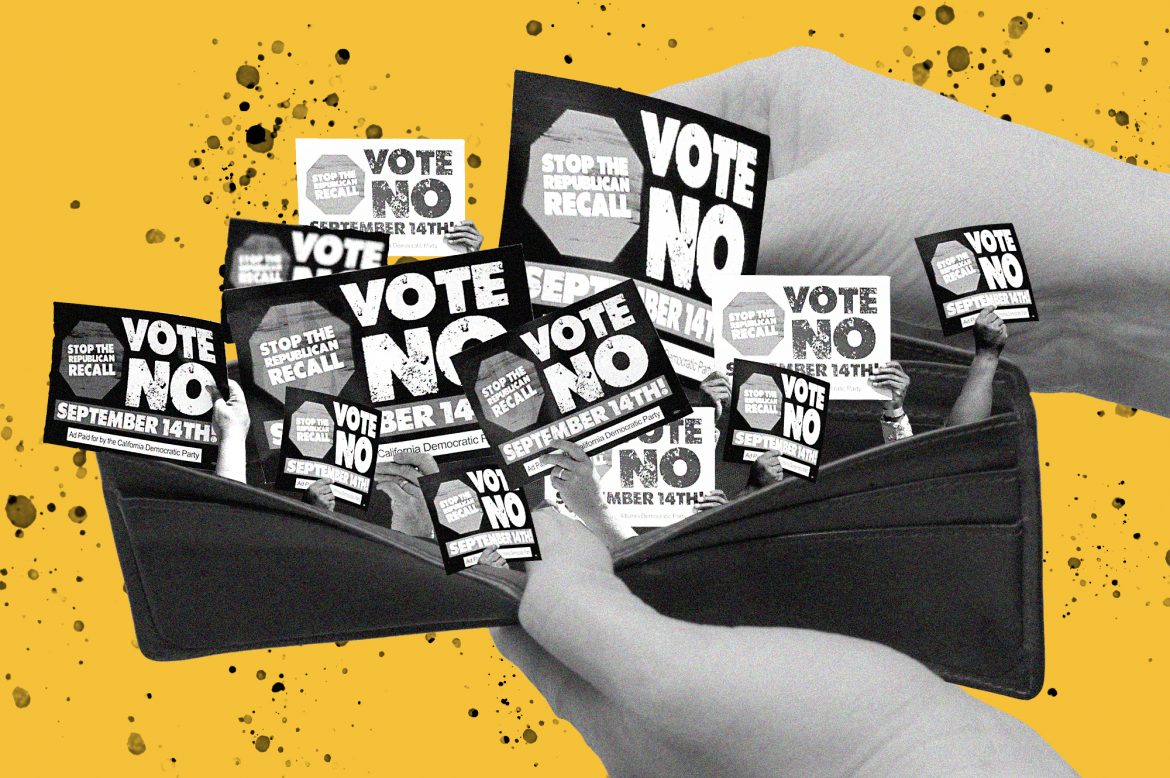 As Gov. Gavin Newsom wraps up a month of high-stakes decisions about what should become law in California, he’s also making calls that impact many of the donors who just spent millions of dollars to help him defeat the historic Sept. 14 recall.

Labor unions, real estate moguls, tech titans — interest groups that lobby at the state Capitol often try to sway elections. That’s nothing new. But the attempt to remove Newsom presented them with an unusually stark opportunity to try to wield influence: Donors could give the governor unlimited sums of campaign money for an election held the same week Newsom began signing and vetoing bills.

“It turbo-charged something that was already supercharged,” said Jessica Levinson, a professor at Loyola Law School and former president of the Los Angeles Ethics Commission. “It is this perfect storm highlighting for us how money works in politics.”

Normally, the job of the most powerful decision-maker in California only comes before voters every four years. Regular elections in November take place after the governor has concluded signing bills for the year — and the law limits how much money donors can give. But those conventions didn’t apply to the recall.

“If you start from donation-land and you drive to decision-land, that road used to be a lot longer. But thanks to the recall it’s half a block away,” Levinson said.

For some donors, the unusual election was just another way to give to someone they already supported: About 260 donors who contributed to the anti-recall committee also gave Newsom a total of $1 million this year for his 2022 re-election campaign.

Newsom has until Oct. 10 to finish signing the roughly 800 bills lawmakers sent him this year. His spokesperson Erin Mellon said: “The governor’s decisions, always grounded in sound policy and good governance, are made in the best interest of the State of California.”

Here’s a look at how Newsom’s decisions this year intersect with some key donors who contributed to the $71 million campaign war chest that helped the governor keep his job.

That generosity included a $3 million check in May from Netflix founder Reed Hastings, making him Newsom’s biggest individual donor.

In July, Newsom signed legislation as part of the state budget that gives an additional $330 million in tax credits to film and television productions. The credits have not yet been awarded, but Netflix was the biggest winner in an earlier round, scoring $43 million for three productions.  The new tax breaks, Newsom said when he signed them into law, will “fuel the California Comeback through thousands of good jobs right here in the Golden State.”

Katzenberg, in a recent New York Times podcast, called the effort to oust Newsom a  “nonsensical, idiotic recall” and said governors across the country have faced extraordinary challenges in managing the pandemic. Newsom, he said, has “actually done a decent job, given the circumstances.’”

Relationship status between Newsom and the tech industry? It’s complicated.

Tech executives who had a history of supporting Democrats, including Newsom, turned heads when they started donating to the campaign to throw the governor out of office, saying they were fed up with his pandemic management. Their money helped gather enough signatures to put the recall on the ballot and their Silicon Valley fame gave the GOP-led campaign a bipartisan patina.

Tech investor David Sacks — who gave Newsom nearly $60,000 in 2018 only to spend more than $100,000 trying to oust him this year — said the recall was worth it even though Newsom won in a landslide.

“If you look at when Newsom relaxed the lockdowns, it was at every step of the recall process,” Sacks said recently on his “All In” podcast. “And he got the education unions to stand down on the issue of school reopenings, I think because he was facing this recall. So… the recall was worth it, just for that.”

Newsom doesn’t have a lot of tech-related legislation to evaluate this year. Most of the bills internet companies lobbied against stalled early in the year and never reached his desk.

But lawmakers did send him a bill meant to crack down on food delivery apps such as DoorDash and UberEats by prohibiting them from marking up the price of food they deliver and requiring them to reveal any service fees to customers. Tech trade associations oppose it, arguing that fee arrangements between restaurants and delivery services should remain confidential. Newsom has yet to weigh in.

He already signed legislation targeting warehouses like Amazon’s, where workers had complained of skipping bathroom breaks and safety precautions under pressure to meet quick delivery times.

And two years ago, Newsom signed sweeping legislation meant to curb the gig economy by limiting the use of independent contractors — a move that put him at odds with donors such as Uber and DoorDash.

Several native American tribes that run casinos donated a combined $3.8 million to help Newsom fight the recall as they pushed to expand gambling in California. Tribes are behind a proposed ballot initiative that would allow sports betting at their casinos — if voters approve and if the governor sanctions it through compacts with individual tribes. The tribes’ proposal is one of a few different sports betting measures that could be on the ballot next year.

In the Legislature this year, tribes lobbied for bills to expand recognition of Native Americans and change how the state and tribal governments work together on issues related to child welfare, foster children and firefighting.

Newsom signed the bills on Native American Day last month, including legislation to build a memorial to Native Americans at the state Capitol where a statue of a missionary was toppled amid protests against racism, replace the Columbus Day holiday in state courts with a “Native American Day” and establish recommendations permitting Native American students to wear cultural or spiritual items at high school graduation.

Newsom’s relationship with Native American tribes predates the recall. During his first year as governor, Newsom apologized on behalf of the state for “the many instances of violence, maltreatment and neglect California inflicted on tribes.” And he established a “Truth and Healing Council” to clarify historical records about the relationship between tribes and the state — efforts his office described as first in the nation.

Developers, real estate investors and realtors gave at least $5.3 million to help Newsom fight the recall as their industry pushed legislation to make it easier to build more homes in California.

“We’re not building enough housing at all income levels in the state of California,” Newsom said last week as he signed more than two dozen bills aimed at boosting development. “We recognize that we’ve got to make up for decades and decades of… that neglect.”

It was the second batch of housing bills Newsom has signed since the recall. The first included two controversial measures that will allow duplexes in neighborhoods zoned for single-family houses and let cities approve buildings with up to 10 apartments in areas near public transportation. Critics suing the state over the new law allowing 10-unit apartment buildings dubbed it a “birthday present to developers.” Supporters argue that building more homes will help Californians who struggle to afford rent in the state’s tight housing markets.

California’s shortage of affordable homes has been a focus of Newsom’s since he ran for governor in 2018. He campaigned on a goal to build 3.5 million homes by 2025, but so far has not come close. Newsom said the new laws he signed this year should help spur construction of 40,000 new housing units, plus 44,000 units and treatment beds for homeless individuals.

Of course, not all developers are on Newsom’s side. Geoff Palmer, who owns a company that has built many Southern California apartment buildings, was one of the biggest donors to the effort to recall Newsom. He gave $200,000 to help qualify the recall for the ballot and more than $1 million to support the candidacy of GOP radio host Larry Elder.

Labor unions are the elephant in the room when it comes to money Newsom raised to fight the recall. Organized labor donated at least $25.7 million — or more than one-third of the total the governor raised to keep his job. Unions, of course, have deep ties to the Democratic Party and a stake in nearly every aspect of state government.

One labor leader cited Newsom’s actions to let child care workers unionize, provide extra sick leave during the pandemic and reverse cuts to in-home caregivers as reasons they put so much money and effort into helping him win.

“SEIU members will fight to protect the significant gains for workers and communities that we secured in partnership with our pro-worker Governor,” April Verrett, who sits on the executive board of SEIU California, said in a statement after the election.

SEIU donated $6.6 million to the anti-recall campaign and deployed thousands of its members to knock on doors and call voters.

Now the union, which represents nursing home workers, is waiting to see if Newsom will sign a package of bills it pushed to strengthen nursing home regulations.

Earlier this year, Newsom signed a pay hike for prison guards, whose union donated $1.8 million to fight the recall. And, amid soaring tax revenues, he signed a state budget that gives public schools more money than ever. Teachers gave about $2.4 million to defeat the recall.

Construction workers gave nearly $7 million to the anti-recall campaign. Newsom pushed this year for more spending on high speed rail, which would have been a boon to construction jobs, but was unable to convince lawmakers to agree.

The governor did not do everything labor unions wanted. He vetoed legislation that would have allowed farmworkers more ways to vote in union elections, triggering a protest in which they marched to the French Laundry — the posh wine country restaurant where Newsom infamously dined with lobbyists during last year’s pandemic restrictions.

Newsom did not extend extra pandemic sick leave, despite lobbying by unions to do so, nor provide “hero pay” for frontline workers. He vetoed labor-backed legislation to raise the rate of pay workers get while out on family leave. And despite expanding Medi-Cal health insurance to cover more low-income undocumented immigrants, he has not established a “single payer” health care system — something pushed by nurses unions that backed his 2018 election and gave him $1 million to defeat the recall.