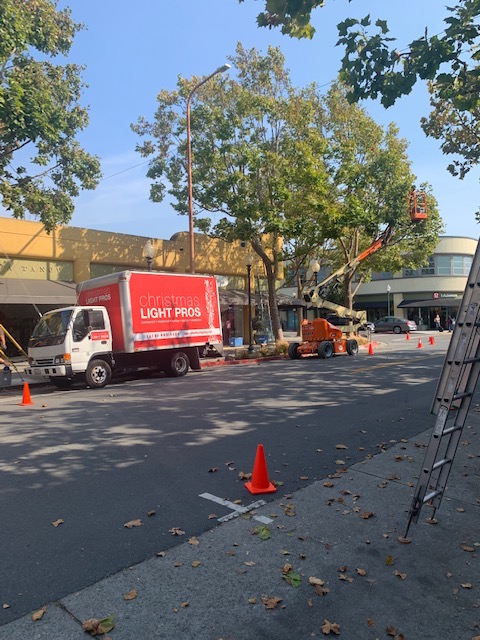 The leaves have only just begun to turn but we spotted holiday lights going up on Fourth Street in Berkeley on Oct. 4. This holiday season could be make or break time for local merchants — many stores in the Berkeley shopping district have already downsized or closed up shop and those that remain may have fewer wares to sell. News reports about disruptions to the global supply chain may impact holiday shopping, so plan ahead, shop locally, and prepare for delays.

Excerpt from a recent KPIX report on Sept. 28:

Chaos theory in its simplest form says if a butterfly flaps its wings in China, it means rain in Central Park. Well, that applies not just to weather, but supply chains as well, and in the Bay Area, it will impact everything from computer parts for your car to the gifts and toys on your holiday shopping list.

Outside ports in Southern California, more than 70 container ships are sitting off the coast waiting to be unloaded.

“There are not the people in place to move the containers and the chassis where they need to go. So you’ve got a lot of stuff piling up at the ports and at the warehouses. When that happens, the harder it is to get the stuff that is ready to move,” said John Drake, VP of Supply Chain Strategy for the U.S. Chamber of Commerce.

A huge surge in pandemic e-commerce and imports is in part to blame…Many of the problems on the West Coast seem to be stacked up at the Ports of Los Angeles and Long Beach, but are worldwide, as well. The Port of Oakland had 30 containers waiting in the San Francisco Bay this summer, but the ILWU and the Pacific Maritime Association cut a deal to hire more people.

“Agreed to hire hundreds more people to be able to load and offload cargo at the Port of Oakland and that’s made a big difference for us,” said Oakland port spokesperson Marilyn Sandifur.

And from Bloomberg on Oct. 3: “It’s the beginning of October, just the start of what the retail world simply calls “peak.” But the industry is already in various forms of panic that usually don’t take hold until the weeks before Christmas.

Early in the year, the hope was that the bottlenecks that gummed up the global supply chain in 2020 would be mostly cleared by now. They’ve actually only gotten worse — much worse — and evidence is mounting that the holiday season is at risk.

Across Europe, retailers such as apparel chain H&M can’t meet demand because of delivery delays. In the U.S., Nike cut its sales forecast after Covid-19 triggered factory closures in Vietnam that wiped out months of production. And Bed Bath & Beyond’s stock plunged amid shipping woes, with Chief Executive Officer Mark Tritton warning that disruptions would last well into next year. “There is pressure across the board, and you will hear about that from others.”

Covid outbreaks have idled port terminals. There still aren’t enough cargo containers, causing prices to spike 10-fold from a year ago. Labor shortages have stalled trucking and pushed U.S. job openings to all-time highs. And that was before UPS, Walmart and others embark on hiring hundreds of thousands of seasonal workers to take on the peak of peak.”