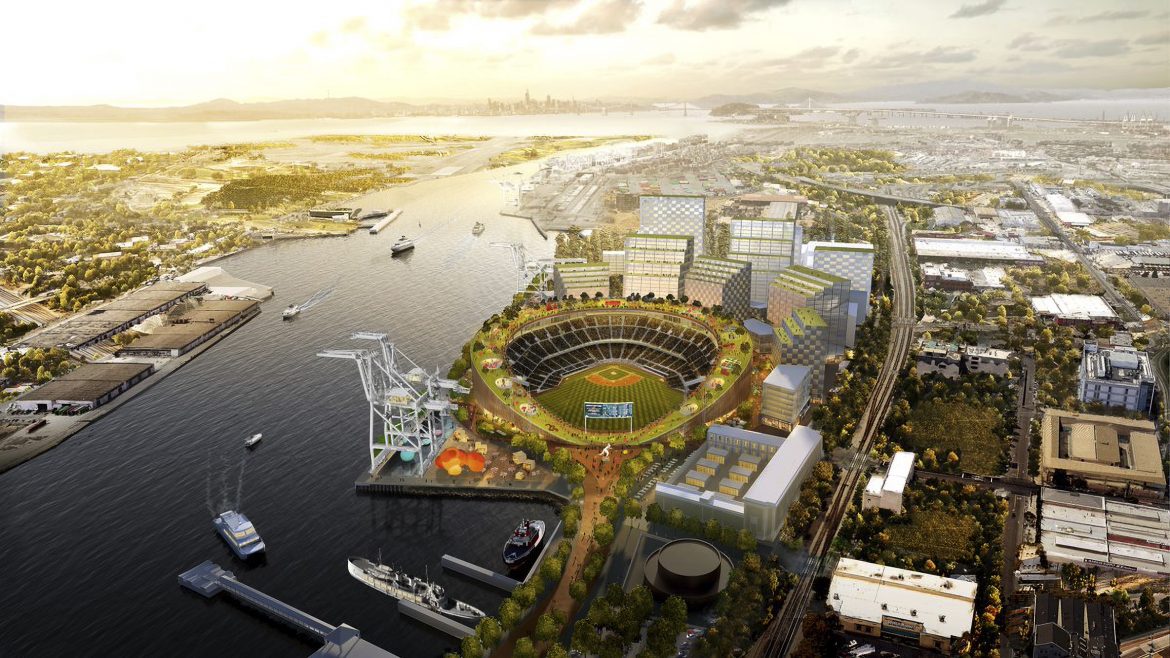 The Alameda County Board of Supervisors will signal support one way or the other for a new ballpark for the Oakland A’s at the waterfront Howard Terminal site this coming Tuesday.

Major League Baseball will likely see the action or inaction by supervisors Tuesday as evidence of the region’s willingness to accommodate the A’s, who are seeking to move from their current Coliseum site in East Oakland and have said they are willing to move out of the city if the Howard Terminal proposal doesn’t go through.

On the board agenda for noon Tuesday is a resolution and possible vote on whether the county will contribute potential future tax revenue to help the A’s pay for parks, affordable housing, and other onsite infrastructure.

The resolution is non-binding.

“It is apparent we could lose this last professional franchise to another city,” Supervisors David Haubert and Richard Valle wrote in a letter Tuesday to board President Keith Carson.

Recently, the Oakland Raiders moved to Las Vegas and the Golden State Warriors moved across the Bay to San Francisco. The Raiders played at the Coliseum where the A’s play now.

Oakland Mayor Libby Schaaf said that the conditions at the Coliseum continue to deteriorate.

Oakland officials want the supervisors to vote on earmarking tax revenue from the development of the new ballpark to help the A’s pay for infrastructure “of community-wide significance.”

County tax revenue would be earmarked for an Enhanced Infrastructure Financing District, which captures additional tax revenue in coming years to pay for the infrastructure.

Haubert and Valle in their letter asked Carson to add the item to Tuesday’s agenda and they asked that the board vote on the resolution. But a vote is not guaranteed.

According to the letter, Carson heard Major League Baseball Commissioner Rob Manfred say that he “is not sure we see a path to success for a new A’s ballpark in Oakland.” Words by Schaaf on Friday were a little more optimistic.

“I feel very confident there will be a vote on Tuesday and that vote will be “yes,” Schaaf said in a meeting with reporters Friday morning.

But she is concerned. Anything but a yes vote she thinks will confirm to Manfred that there is not a path forward for the A’s in Oakland.

Schaaf does not see a path to a deal for a new A’s ballpark in Oakland unless the county participates, she told reporters.

She said, “This vote has been the largest unknown in the entire project.”

Without the county’s participation, Schaaf said, city officials cannot craft a development agreement, which is a contract with the A’s laying out the terms of the ballpark development.

“And that is the biggest job ahead of us,” Schaaf said.

Preliminary development terms were crafted earlier this year in a term sheet.

Neither Haubert nor Valle returned calls Friday seeking comment on whether they would press Carson for a vote.

In their letter, they said that losing the A’s “would diminish the potential for revitalization of” the Jack London Square area.