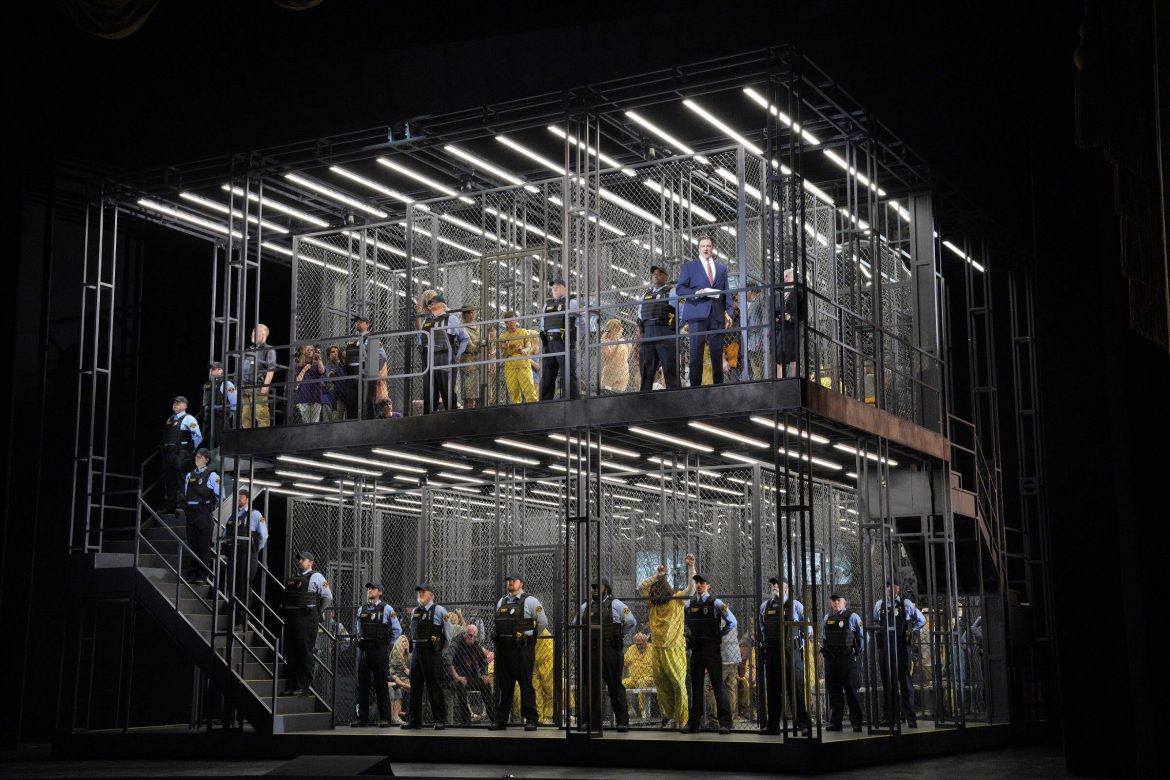 A new staging of Beethoven’s “Fidelio’’ opened at San Francisco Opera last week. While the opera was originally set in an 18th century prison, this production places the action in a modern prison setting, a rotating steel cage jammed with inmates and guards. The story revolves around Leonore, a young woman who has taken a job in the prison disguised as a man named Fidelio in order to search for her husband Florestan, a political prisoner close to death from torture and starvation.

Beethoven’s only opera is a probing commentary on tyranny in the composer’s time, and director Matthew Ozawa and designer Alexander Nichols make the case for contemporary relevance powerfully, showing women prisoners being brutalized by guards, male inmates kicked and beaten and everyone mercilessly shadowed by flashing video monitors.

The first act is a difficult call, a flirtation between the jailer’s daughter Marzelline and her suitor Jaquino, in which Fidelio must identify herself and her mission, setting the stage for what is to come. If anything, this scene, taking place in a prison administration office, is overplayed for comedic content, so that in the quartet where jailer Rocco, his daughter Marzelline and her suitor Jaquino and Fidelio join forces, her pivotal message ​​was difficult to perceive. Music director Eun Sun Kim’s conducting in the first act seemed somewhat sprawling and unfocused at times, but she led the orchestra to a fiery finale.

The staging concept works well, and the singing on all counts is superb. Soprano Elza van den Heever, who made her 2007 company debut as Donna Anna in “Don Giovanni,’’ is a ravishing Leonore vocally and dramatically, leaving no doubt about her dedication to her cause, and tenor Russell Thomas, who has sung works by Donizetti and Bellini here, partners her with equal security and passionate phrasing. Their Act 2 duet thrilled and drove the opera to a perfect finish.

The rest of the cast is universally strong: Bass James Creswell as the jailer Rocco gives a sturdy, understated performance, and bass-baritone Greer Grimsley is a pointedly villainous Don Pizarro, who pushes for Florestan’s death. As Don Fernando, who arrives late in Act 2 to drive the narration to a close, bass Soloman Howard portrays the governor as a slick politician rather than the prisoners’ liberator, a rather cynical touch.

Ian Robertson’s opera chorus nearly stole the show with the heartbreaking “Prisoners’ Chorus,” an all-out paean to liberty. Longtime chorus director Robertson will retire at the end of 2021 and will be missed after 35 years at the helm.

“Fidelio” will be performed 7:30 p.m. Wednesday and Friday, as well as Oct. 26 and 30 at War Memorial Opera House, 301 Van Ness Ave., San Francisco. Tickets are $26-$398. Ticket holders ages 12 and older must show proof of vaccination to attend, and everyone must wear a mask inside the opera house. Livestreaming tickets are also available for Wednesday’s performance for $25. Visit sfopera.com for tickets and more information.