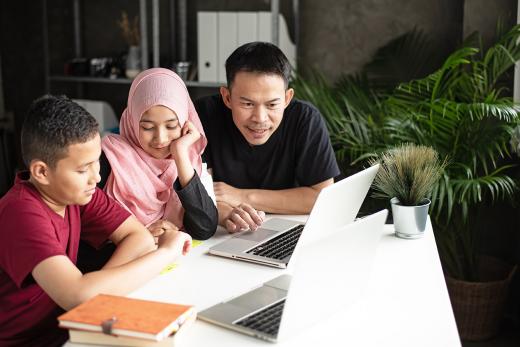 Muslim students in California schools are disproportionally bullied, a new report by the California chapter of the Council on American-Islamic Relations found.

The report released Thursday said roughly half of Muslim students in grades 5 through 12 experienced faith-based bullying, which is more than twice the rate of national statistics, in which 20 percent of U.S. children face bullying. It’s also the highest reported level of students feeling unsafe, unwelcome or uncomfortable at school because of their Muslim identity since CAIR-CA began its biennial surveys in 2013.

The survey, “CAIR-California’s 2021 Bullying Report: Examining Islamophobia in California Schools,” is based on findings from a statewide survey of 708 Muslim students between the ages of 11 and 18 from mid-2018 until the end of 2020. In the year and a half period before the pandemic, 47 percent of Muslim students reported faith-based bulling — a 7 percent increase from the 2016 to 2018. A third of students who wear a Muslim headscarf known as a hijab also reported having their hijab tugged, pulled or offensively touched. And nearly 1 of every 4 Muslim students reported they had a teacher, administrator, or other adult at their school make offensive comments about Islam or Muslims.

“This is particularly alarming,” said Amr Shabaik, the author of the report, considering the relationship and responsibility teachers have to their students.

“This form of hatred and harassment does not occur in a vacuum, and it’s certainly not restricted to California,” Ayloush said. He said anti-Muslim rhetoric is commonplace in American society, whether by media outlets, the film industry or political leaders.

“Teachers are just part of the general public students are the children of parents who are watching the news and hearing whether it’s former President Trump talking about demonizing Muslims,” Ayloush said.

But the CAIR officials said schools do have the ability to combat such hate and Islamophobia and pointed to school districts’ response to the pandemic as evidence.

“(It) proves that these systems are capable of changing their entire educational model to be more responsive to the well-being of their students,” CAIR officials wrote in a news release.

Some changes CAIR recommended to schools includes limiting a bully’s exposure to their victim. Shabaik said it’s effective and said the switch to online learning, for example, significantly decreased reported bullying from 47 percent to 26 percent. He said schools should also do a thorough assessment of their school environment as it pertains to Islamophobia and to implement zero tolerance policies against those forms of hatred. The final recommendation is to adopt and implement proper anti-racist and ethnic studies curriculum in schools.

The state approved a law requiring ethnic studies to be taught in all California schools, which will be implemented in the next few years, which Shabaik called a good first step. But he said the model curriculum developed was still deficient in certain areas.

“For example, in the initial draft, it was inclusive of Arabs and Muslims and Palestinians,” Shabaik said. “A lot of those lessons of the curriculum were taken out by the final version.”

Schools should pick up slack and work with other ethnic studies organizations to fill that gap, he said.

The survey was conducted out of CAIR’s four offices in California based in the San Francisco Bay Area, Greater Los Angeles Area, Sacramento Valley/Central California and San Diego. It did not analyze which parts of California had the highest rates of Islamophobia, but Shabaik said the state was on par with other states around the country. Most states found half of Muslim students experienced faith-based bullying. Massachusetts was an outlier, in which roughly 60 percent of students experienced anti-Muslim bullying.

“And unfortunately, the stories that (the) Massachusetts (CAIR office) were asserting are very, very similar to stories that we would receive in here about here in California,” Shabaik said.

Those interested in reading the report can do so at https://bit.ly/21Bullyingreport.