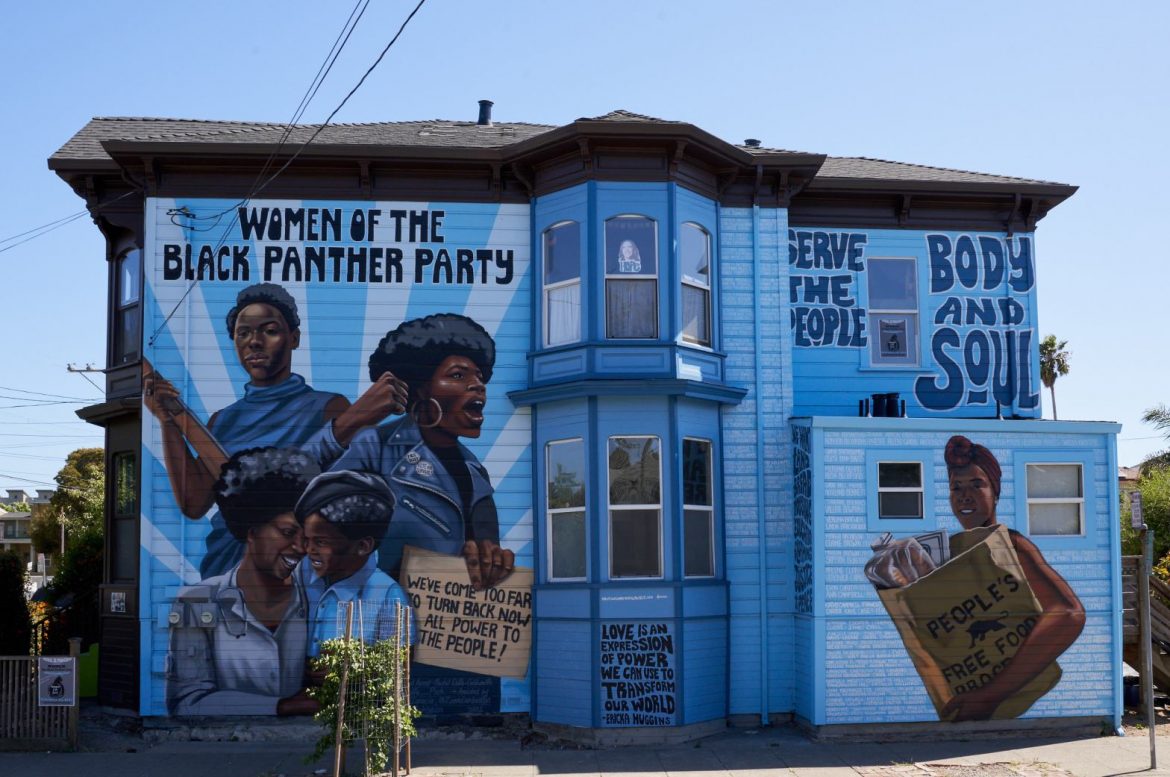 Mural in Oakland dedicated to the Women of the Black Panther Party. More information about the mural project is at https://westoaklandmuralproject.org/pages/mini-museum-the-mural

“It kind of blows my mind that it’s been 55 years,” says artist Dana King.

King is referring to the Black Panther Party’s 55th Year Celebration, with events taking place in Oakland throughout October.

In addition to the unveiling of King’s sculpture of one of the BPP’s founders, Dr. Huey P. Newton, events include an art exhibition featuring the work of Black Panther Party artists, a social gathering, a photography exhibition, guest speakers such as Charlotte O’Neal and BPP-related film screenings.

“This [anniversary] is the very first acknowledgement in the city of Oakland — visually, artistically. But the Black Panther Party began in Oakland. So here we are 55 years after its beginning. They’re being honored in the city in which they probably had the most significant impact,” King conveys in an interview.

Huey Newton co-founded the Black Panther Party with Bobby Seale in Oakland in 1966. They sought to aid and create opportunities for those who were oppressed. BPP created the first free breakfast program for children — a program that schools continue to use to provide free meals for students in need — and focused on offering people services such as legal aid, housing, education and health care. Their Ten-Point Program served as the guiding principles behind their efforts to support the Black community.

Fittingly, the locations of some of the anniversary events tie in with the Black Panther Party’s background. The It’s All Good Bakery, on Martin Luther King Jr. Way, was BPP’s original office; a celebratory reopening featuring a plaque presentation will take place on Oct. 22. The “55th Year Celebration” social event scheduled for Oct. 23 will be held in West Oakland’s Bobby Hutton Park (also known as DeFremery Park). “Lil’ Bobby” Hutton was the Black Panther Party’s first recruit and served as the treasurer, and the park was named in his honor. And King’s bust of Newton will be unveiled at the corner of Dr. Huey P. Newton Way (formerly Ninth Street) and Mandela Parkway on Oct. 24.

King describes her Newton sculpture (and all of her work) as significant because of occupying physical space and representing people, stories and cultures. Of the Newton bust, King explains, “This is the first physical manifestation of what occurred [in Oakland] 55 years ago. So taking up space is really important. … The power of that space is that we are in it, and by ‘we’ I mean stories of African descendants.”

Plus, made of bronze, the Newton sculpture has a long-lasting quality, meaning that future generations will be able to see it — and learn about what and whom it represents — decades and even centuries later.

Much like the Black Panther Party itself, its importance has no expiration date.

The following events are taking place in Oakland for the Black Panther Party’s “It’s About Time: 55th Year Celebration”:

For more information about these events, go to bpp55thyearcelebration.com.