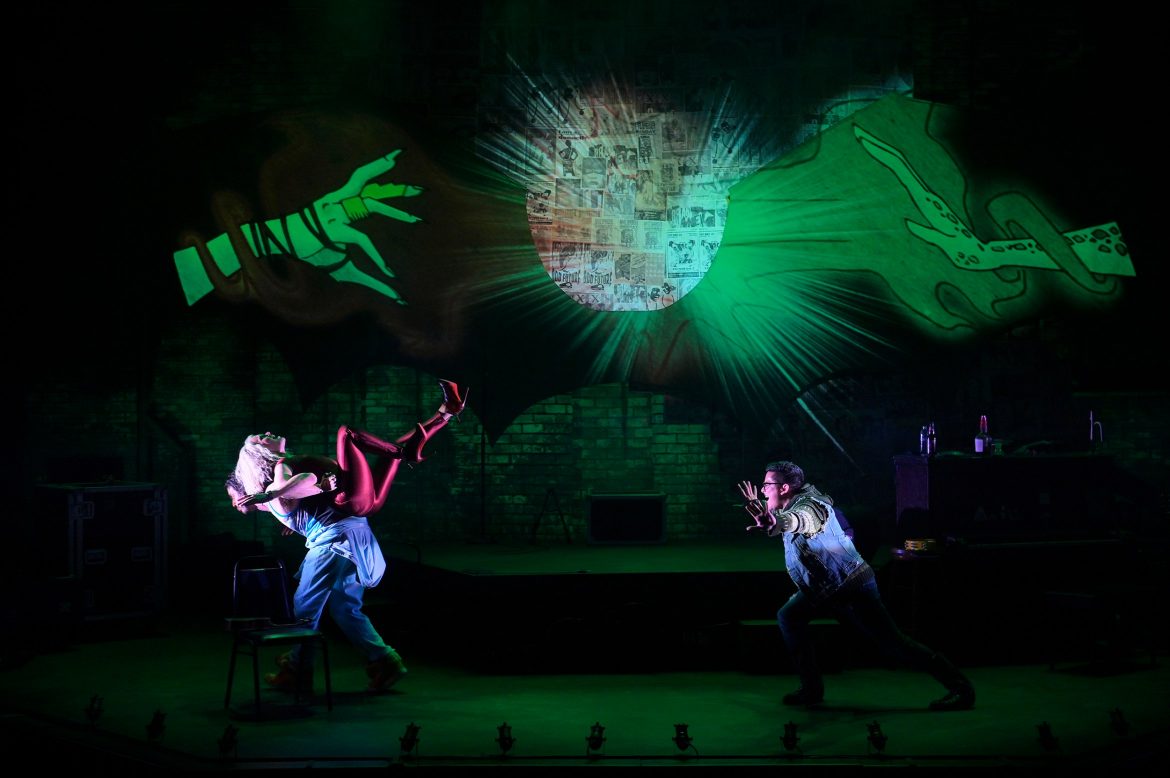 “You’ll leave me behind, and if I cross your mind, it’s ’cause I’m just a boy who looks like a lizard,” sings Justin Huertas’ lonely protagonist in “Lizard Boy,” the comic-book-infused indie rock musical that is kicking off TheatreWorks Silicon Valley’s 51st season.

Huertas, who wrote the book, music and lyrics, plays Trevor, described as “a sweet and insecure recluse covered in scales following a freak childhood accident.” Trevor meets a newcomer to Seattle, Cary (William A. Williams), via a dating app, and their first encounter turns into a mythological journey — and possibly saving the world. Along the way, Trevor and Cary cross paths with a mysterious singer named Siren (Kirsten “Kiki” deLohr Helland), whose voice has been haunting Trevor’s dreams for some time.

Over the phone, Huertas tells me that the original iteration of “Lizard Boy” — which was commissioned by Seattle Repertory Theatre and well-received when it debuted there in 2015 — was a “messy hodgepodge” of things he loves including reading comic books and ancient mythology, drawing superheroes, playing cello, singing harmonies and living in Seattle. Influences include the X-Men, the Teenage Mutant Ninja Turtles and particularly the origin story of Spider-Man, a nerdy teen who resolved to use his superpowers for good, as well as the songs of the 2006 musical “Spring Awakening” and the vocal harmonies of Portland indie-folk band Joseph.

“When it came to creating ‘Lizard Boy,’ I knew I wanted to create a superhero, and I knew I wanted it to be a Seattle-based superhero. I just took little things here and there from mythology that I’ve grown up with and made up my own thing,” he says.

“I grew up in Seattle, and I’ve seen Seattle as a mythical, magical place my whole life. So I was trying to find ways to make it mythical and magical for everyone else.”

During the show — which is directed by Brandon Ivie — Huertas, Williams and Helland sing and play a range of instruments, including cello, guitar, piano, ukulele and kazoo. All three starred in the original production and are making their TheatreWorks debuts. “I wanted everything to be generated by the three actors onstage, so all of us play all the instruments, depending on whose hands are free,” Huertas says.

His friendships with his co-actors Helland and Williams long predate the musical, so their chemistry is palpable. “Whenever we learn a new song and or try and figure out harmonies, it’s always a fun little puzzle. The way that we learned the score was very scrappy, in the fashion of garage band,” Huertas says. “We would learn things and try things on the spot until we landed on something we thought was great.”

Now, he says, after years of fine-tuning the writing and sound, the story is more streamlined, the music is more intricate and also the strangest aspects of the musical are more relatable than he ever expected. His alter-ego, Trevor, “thinks that he looks like a freak because he has these green lizard scales,” Huertas says. “So he is a recluse, and he stays inside all year, except for this annual festival where everyone’s dressed up as lizards. It’s this one time he can go outside and nobody even notices that he’s different.

“I never intended for the isolation part to be as relevant as it is,” he says laughing. “We came back to the script this year, and I’m saying things out loud like, ‘I haven’t left my apartment in a year,’ and I’m like, ‘Oh my God, I actually haven’t.’ It was crazy.”

Also, the idea that the apocalypse is nigh, a long-running theme of sci-fi TV series and Marvel movies, is now something that feels a little more realistic with the massive wildfires up and down the West Coast and the “Bladerunner”-esque orange sky that loomed over the Bay Area last year.

“The character Siren, who is ostensibly the supervillain of the story, says early on that she believes the world is going to end in this fiery apocalypse,” Huertas says. “In the past, when we’ve read it, it makes her sound a little off. But she says it now, and I feel reaction of the audience being, ‘Yeah, probably.’ It’s not as weird as it used to be.”

He laughs. “That’s another thing I didn’t expect to be such a chill idea. You walk outside, and something feels really ominous, and then you’re like, ‘Well, it’s another Tuesday,’ and you go on about your day.”

But the emotional journey of the Lizard Boy was always intended to connect with the audience — and it has, ever since the musical’s debut regularly sold out the house in Seattle six years ago. The only hints of Trevor’s supposed monstrous appearance are patches of green glitter on Huertas’ skin, which was a deliberate decision he made when developing the play with Seattle Rep’s then-artistic director Jerry Manning, who died in 2014, and costume designer Erik Andor. The lack of reptilian grotesquery, in fact, is a strong indication Trevor is suffering from trauma-induced dysmorphia.

“It became clear we needed to see my real face and my real skin because what makes this so relatable and what people can connect with is that this is just a human person who doesn’t see himself as powerful or beautiful or normal even,” Huertas says.

“He really has a picture in his head of who he is and what he looks like, and then he learns from both of these characters — even the supervillain — that what he is seeing is not real and he does have power that he is afraid to claim.”

Huertas remembers distinctly the first time he saw an actor who is Filipino like himself on the screen, Dante Basco as Rufio in 1991’s “Hook.” Six years later, he saw Paolo Montalban play the prince in the Disney television remake of “Rodgers & Hammerstein’s Cinderella” with Brandy as the titular princess.

Because such role models were so rare, when Huertas studied acting as a college student and then tried out for auditions as an adult, he at first accepted that he would be typecast into particular side roles, such as the platonic character who provides comic relief. But then after some reflection, he started asking, “Why can’t I be the leading man?”

“That’s why when Jerry Manning and Seattle Rep gave me this opportunity, I was like, ‘I need to write myself as a superhero, because I’ve never seen this before. And who knows if there are other people out there who also need to see a Filipino superhero,’” Huertas says.

Some of the superhero comic-book type action plays out via overhead projections, Huertas explains, but only for aspects of the story that are not easily created on the stage. “One of the characters has the ability to grow claws out of her hand, and we can’t do that onstage, so we have this awesome illustration behind us to show you what the characters are seeing,” Huertas says. “Those projections are a really fun way to incorporate another one of my talents; I’m one of the illustrators.”

But the graphic-novel feel is conveyed in other ways. “The pace and the format of the show are very comic-booky. It’s almost like you turn the page, and you’re immediately in a new location,” Huertas says.  At one point, “you’re seeing two simultaneous scenes that Trevor’s sharing with two different people. The intention behind that was to create this comic-book panel where the character’s in the middle, and then on either side of him, there’s a different comic-book scene happening on the page.

“Lizard Boy” runs through Oct. 31 at Mountain View Center for the Performing Arts, 500 Castro St., Mountain View. Tickets are $30-$95. All ticket holders must show proof of full vaccination and wear a mask while in the theater. A video on demand of the show will be available from Tuesday through Nov. 7 for $25. For tickets and information, visit  theatreworks.org or call (650) 463-1960.