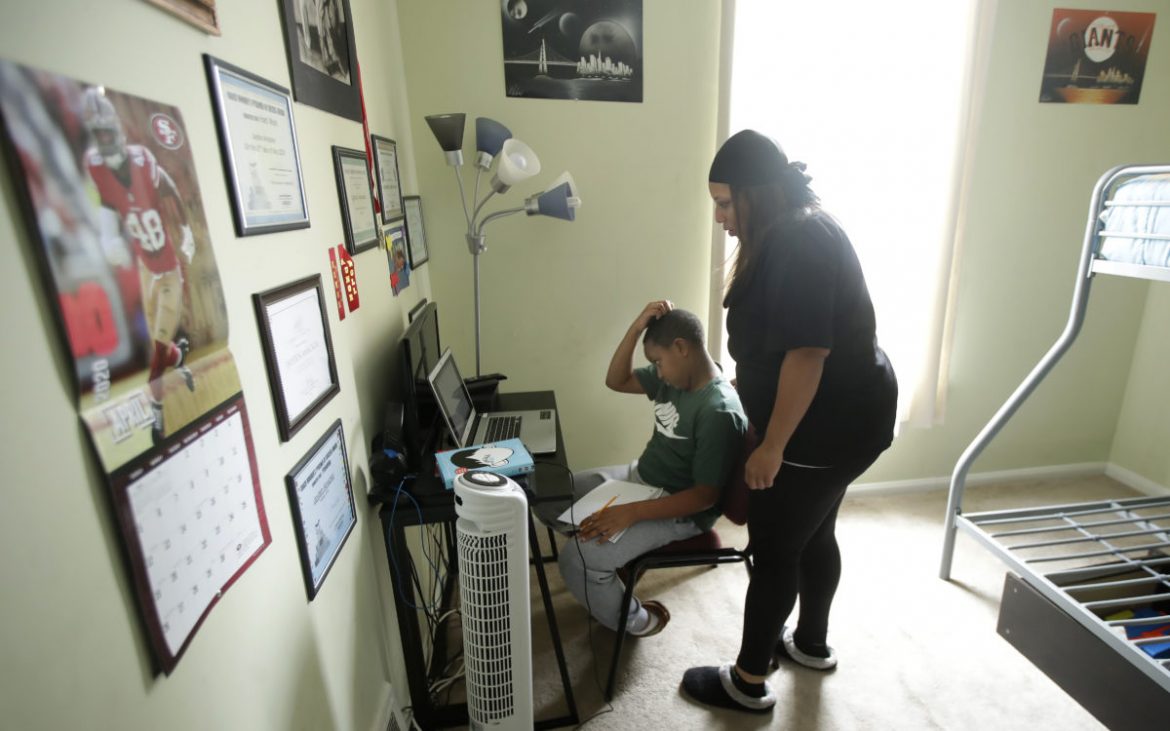 Statewide, 3.8% of students are enrolled in independent study this year, according to the state Department of Education. (CREDIT: AP PHOTO / JEFF CHIU)

Just under 4% of California students are enrolled in independent study this school year, forgoing — at least temporarily — the chance to return to in-person learning, according to new data released by the California Department of Education.

The preliminary data shows that statewide, 3.8% of students have opted to study at home because they or their families are at high risk of contracting Covid or they thrived under distance learning last year and want to stay with it.

The data, released Friday, is based on responses from about 2/3 of California school districts to the state on their enrollment numbers. So far, the data shows a wide range of interest in independent study, which the Legislature required schools to offer this year for students who did not want to return to in-person learning.

Some districts report that more than 10% of their students have enrolled in independent study. Hawthorne Unified in Los Angeles, for example, has 789 students studying independently, or nearly 12% of the overall student enrollment. Numerous rural districts and county offices of education also have relatively high rates.

Dozens of districts have fewer than 1% of students opting out of in-person classes.

Independent study has long been an option at many California schools, usually chosen by students who can’t attend school regularly. Some have jobs that conflict with the traditional school schedule or play on elite traveling sports teams or miss long periods of in-person school due to family emergencies, health challenges or travel. Some students prefer independent study because they can work at their own pace, without the distractions of campus life.

Temple City Unified in the west San Gabriel Valley area of Los Angeles County had one of the state’s highest rates — 10.42% — of students enrolled in independent study. That’s good news to Superintendent Kimberly Fricker, who said the district had been preparing for months to offer a high-quality independent study program.

Beginning in March, the district began surveying families about their preferences for the 2021-22 school year. Many said they were concerned about the spread of Covid and wanted to keep their children in remote learning.

“We chose to embrace these families and give them a viable, high-quality option. Our No. 1 goal is to make sure our families feel comfortable and welcome, and this is a way to do that,” Fricker said.

The district offered drive-thru pickups for textbooks, supplies and tablets and plenty of support for students. Elementary students attend online classes taught by a dedicated remote-learning teacher, while high school students follow a self-paced online curriculum and meet with their teachers and peers weekly via Zoom.

The program has been so popular, in fact, that students from other districts are enrolling, and Temple City now has a waiting list. The district will probably keep its independent study program even after the pandemic ends, Fricker said.

“So far, the response has been positive,” Fricker said. “We’re continuing to survey families and staff and make adjustments as we go. But at this juncture we feel good about it.”

Novato Unified is hosting the independent study program for all the county’s students.

Independent study enrollment is low because most schools in Marin have been open for at least six months for in-person learning, and families and students are accustomed to being back on campus, said Ken Lippi, assistant superintendent of the Marin County Office of Education.

With help from the Marin County Public Health Department, the vaccination rate among students and school staff is above 90%, and transmission rates countywide have been very low.

“We’ve been very fortunate,” Lippi said. “But we could not have done it without our partners in the public health department. Partnering with them turned out to be the most important thing we did.”

In Davis Joint Unified in Yolo County, about 3% of the student population is in independent study, roughly double what it was last year, and demand remains high, said Rob Kinder, principal of the district’s independent study school.

Davis Joint Unified runs four independent study programs: a home-school option, a program that combines at-home classwork with studying at school in person and two all-virtual programs for elementary and high school students. The home school and hybrid programs pre-date the pandemic; the all-virtual programs were added this year.

In all the programs, students can participate in sports, dances and extracurricular activities at their home campus so they don’t feel isolated from their peers, Kinder said. In past years, students in independent study have performed at about the same level as their peers on standardized tests, he said.

“We’ve had a lot of interest in independent study this year, so we’ve been very busy,” Kinder said. “There’s been some challenges. We realize teachers have been working extraordinarily hard this year, and we want to make sure they, as well as families, feel supported.”

Even before the pandemic, the district had been planning to expand its independent study program to accommodate the increasing number of students and families interested in the option. And when the pandemic ends, the programs will remain.

“We see this as an investment in our kids,” Kinder said. “We don’t see it as a ‘just check the box’ thing. We try to make it as enriching as possible.”