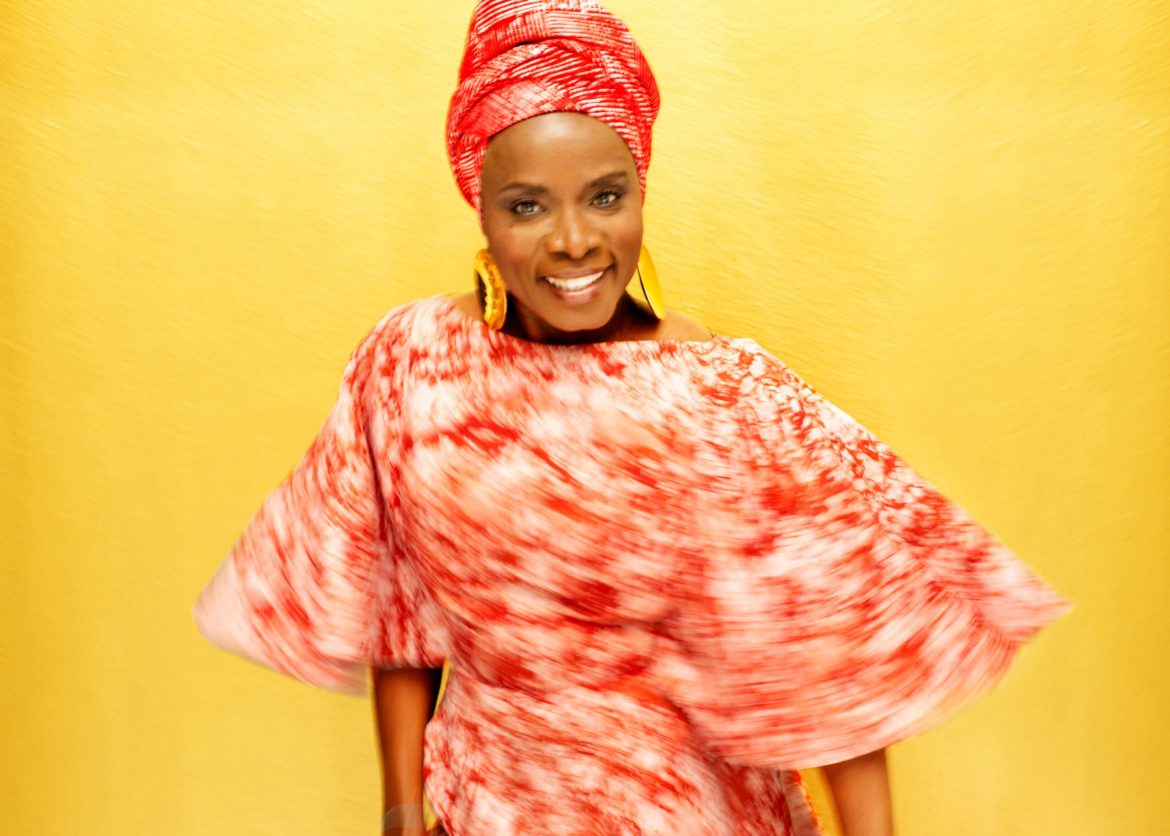 Angélique Kidjo, Cal Performances' 2021-'22 artist-in-residence, will play two shows during the season at Berkeley's Zellerbach Hall, starting this Friday with a performance of her 2018 album re-interpreting the Talking Heads' "Remain in Light." (Photo courtesy Fabrice Mabillot)

Angélique Kidjo laughs when she remembers the first time she heard “Once in a Lifetime.”

“I thought, ‘What is this?,” Kidjo says. “I didn’t know where it came from, but the melody kept haunting me.“

She told her management that she wanted to cover the song, from the Talking Heads’ groundbreaking album, “Remain in Light.”

“They were saying ‘She’s crazy; she can’t cover this!’” said Kidjo. “And I said ‘I’m covering the whole album!’”

She did, and the results were thrilling. Released in 2018, Kidjo’s recording of “Remain in Light” captured the essence of the Heads’ groundbreaking 1980 original, while infusing the project with the propulsive sound of her African homeland.

Now Kidjo — the acclaimed singer, composer, activist and four-time Grammy Award winner who has risen to the top of the charts again and again — returns to Berkeley to perform her acclaimed re-interpretation of “Remain in Light.”

Presented by Cal Performances Friday in Zellerbach Hall, the event marks her first of two appearances in Berkeley as a season-long artist-in-residence with the organization. She’ll return April 23 with “Yemandja: A Story of Africa,” her new musical-theater work presented as part of Cal Performances’ Illuminations: “Place and Displacement” programming on themes of migration, exile, dislocation and separation.

If Kidjo and the Talking Heads at first seemed an unlikely pairing, audiences who experienced her “Remain in Light” on disc and live in concert quickly reassessed. In a recent video interview from New York, the French-Beninese artist says that she and Talking Heads leader and principal songwriter David Byrne hit it off from their first meeting.

“I met him when my album ‘Ngozo’ was released,” she recalls. “After the show, he came backstage. He started telling me stories, and we talked about music from my country. From West Africa! I’m looking at him and thinking, ‘How come he knows so much?’”

Kidjo’s recording and subsequent live production of “Remain in Light” became shining examples of her approach to music — a heartfelt tribute from a global musical view, done in her own, high-energy way.

“I have to bring everything back to Africa, because I grew up listening to so many different types of music,” she says. “When it becomes challenging to me, the only comfort that I have is the traditional music of my country.”

Earlier this year, Kidjo released her latest album. Titled “Mother Nature,” it was recorded during the COVID-19 pandemic, with a roster of artists drawn from West African, Afrobeat, Afro-pop, hip-hop and R&B realms contributing mostly remotely — an experience new to her, but one with unexpected rewards.

“It was hard, not to have the people in front of me,” she says. “But on the other hand, I had the luxury to take the time to really do my album. Not to be pressed for time, not to finish this — it just flowed as it had to flow. Because everybody was struggling with lockdown, we were having Zoom conversations. So it was just the luxury of time, having young artists reaching out, me reaching out to some of them, and having everybody come aboard. “

Today, she calls the album “a love letter that I wanted all of us to write to Mother Earth. Because if there’s no more Mother Earth, where are we going to sit and talk? Even with the technology existing, what will the internet be?  What will anything be without the Earth?”

Born in 1960, Kidjo was one of the first girls in Benin to receive a formal education. She grew up hearing Beninese traditional music, but from an early age, she listened to the signature sounds of a wide range of artists, from Miriam Makeba to James Brown, Miles Davis to John Lennon, Nina Simone to Philip Glass. She’s collaborated with a starry list of artists that includes Yo-Yo Ma, Carlos Santana, Peter Gabriel, Bono and the Kronos Quartet; last year, her tribute album to singer Celia Cruz won the Grammy for best world music album.

Kidjo, who lives in France with her husband, musician-producer Jean Hebrail, maintains a full schedule as a performer, mentor and cultural ambassador. The four-time Grammy Award winner, recently named one of Time Magazine’s “100 Most Influential People of 2021,” works tirelessly for human rights around the globe and has been honored for her activism by the World Economic Forum and Amnesty International. This past July, she sang for the Tokyo 2020 Olympic Games opening ceremony.

“Yemandja,” which comes to Cal Performances in April, is her newest project, a musical-theater production that reflects some of her deepest thoughts about the origins of slavery.

“We just finished a workshop and it was intense — really intense,” she says of the work, which is co-commissioned by Cal Performances. “Because every time, that subject of slavery is intense. It’s always the elephant in the room. We haven’t been able to reconcile all the parts of that story, because it’s vast. So it’s a process that is going on, and that’s what this is about: How do we talk about these different parts?”

One of the aspects central to Kidjo’s work is education — a reason she always looks forward to her time in Berkeley. Her upcoming dates at the University of California will include in-depth discussions with students, faculty and the public.

“I love it,” she says. “I breathe different when I’m in UC Berkeley because I’m surrounded by young kids. Seeing them go about their business, hearing them speak and having discussions — I’m like, ‘Wow.’ It’s so exciting.

“It’s important, because there’s not a lot of outlets for kids to speak, to tell us about their dreams, the struggles they are going through. We need to hear from them, and if we don’t hear them out, we continue to make the same mistakes. What they have to say informs us, to re-think the educational system in every country.”

Kidjo will also be panelist at a discussion titled “Music, Diaspora, and the World” at noon Thursday and another titled “Place and Displacement: Bias in Our Algorithms and Society” at 4 p.m. the same day. Both conversations are free and open to the public, but registration is recommended atcalperformances.org.