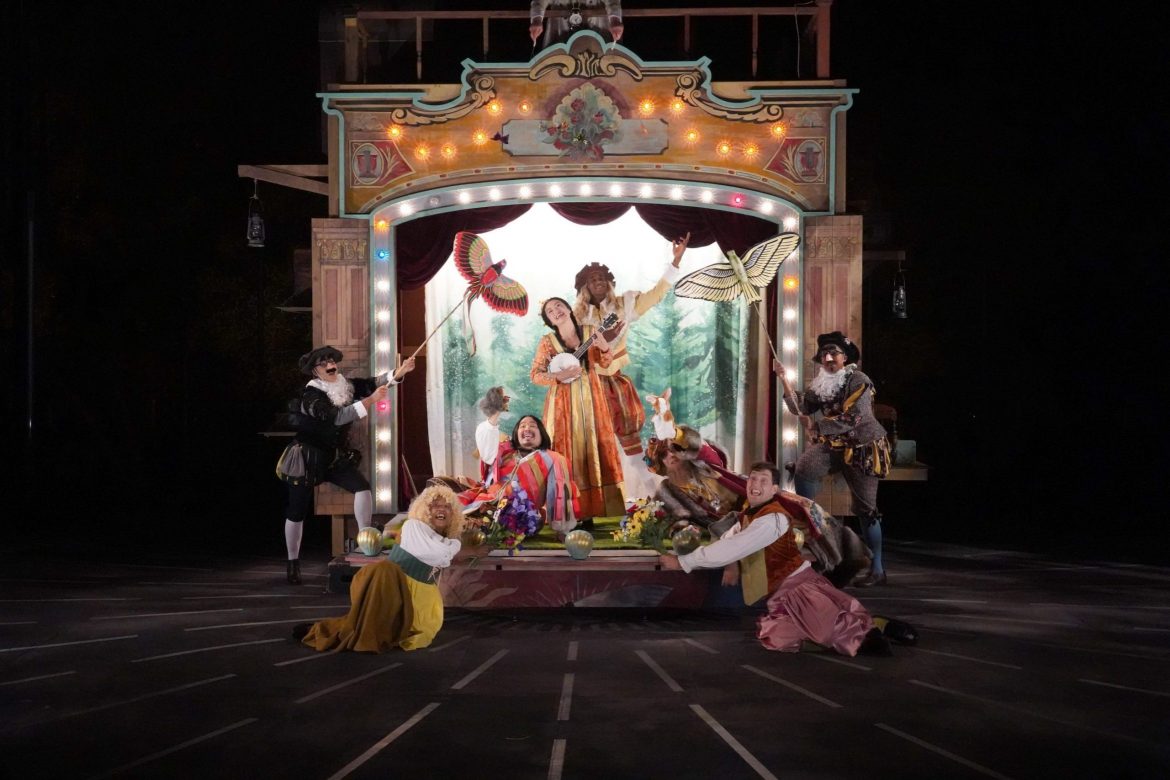 The California Shakespeare Theater’s new production of “The Winter’s Tale’’ is a resounding success. Sitting under the stars with other Shakespeare fans in a beautiful rural setting is a thrill, and if that weren’t enough, the gods brought forth a bright pink cloud that projected raindrops big as the codpieces in the play’s second act to celebrate the show. We have traveled a long way to get here.

The first thing to know about the play is that it requires a substantial suspension of disbelief. About one minute into the first act, King Leontes of Sicily gets it into his head that his very pregnant wife is having an affair with his best friend. Leontes unravels entirely, casts her into prison, where a baby daughter named Perdita is born, and orders the assassination of his friend, the King of Bohemia.

Jealousy works its way through the play until Apollo’s curse brings on the king’s remorse, and the second act. Here, the story of Perdita unfolds. Living among shepherds, she has become a beauty wooed by Florizel, the son of the Bohemian king.

The Cal Shakes cast handles this so-called “problem play’’ with the company’s usual powerful acting and artistic director Eric Ting’s inventive staging. In contrast to the black and white costuming and austere set design of the tragic first act, Ting’s play within a play, created for the comedic second act, is a riot of color, pranks and music, including the B-52s’ 1989 hit “Love Shack’’ and tunes from every other decade to turn up the revelry. Tanya Orellana’s set and Ulises Alcala’s costumes produce a traveling circus.

Craig Marker plays an out-of-his-senses Leontes, countered with a thunderous performance from Safiya Fredericks as a queen who won’t take a false accusation lightly. Dane Troy is the handsome Bohemian king (later a madcap Florizel), and Cathleen Riddley wins top honors as a strong-voiced member of the court who reveals the infamy. Watch with wonder as the nine actors take on multiple roles.

This fanciful adaptation by Ting and Philippa Kelly, which reduces the play from five acts to two, works well, and if Perdita (Sharon Shao) and Florizel are occasionally subsumed by the onstage dazzle led by Phil Wong’s Autolycus, they get together as they must, and the two kingdoms — sober Sicily and boisterous Bohemia — come together and reconcile.

“A sad tale may be best for winter,’’ says one of the children in “The Winter’s Tale.’’ We know isolation and sadness by heart, as did Shakespeare, who it is said wrote “King Lear’’ during a pandemic in his time. “The Winter’s Tale,’’ the first Cal Shakes live show in almost two years, is appropriate for our time.