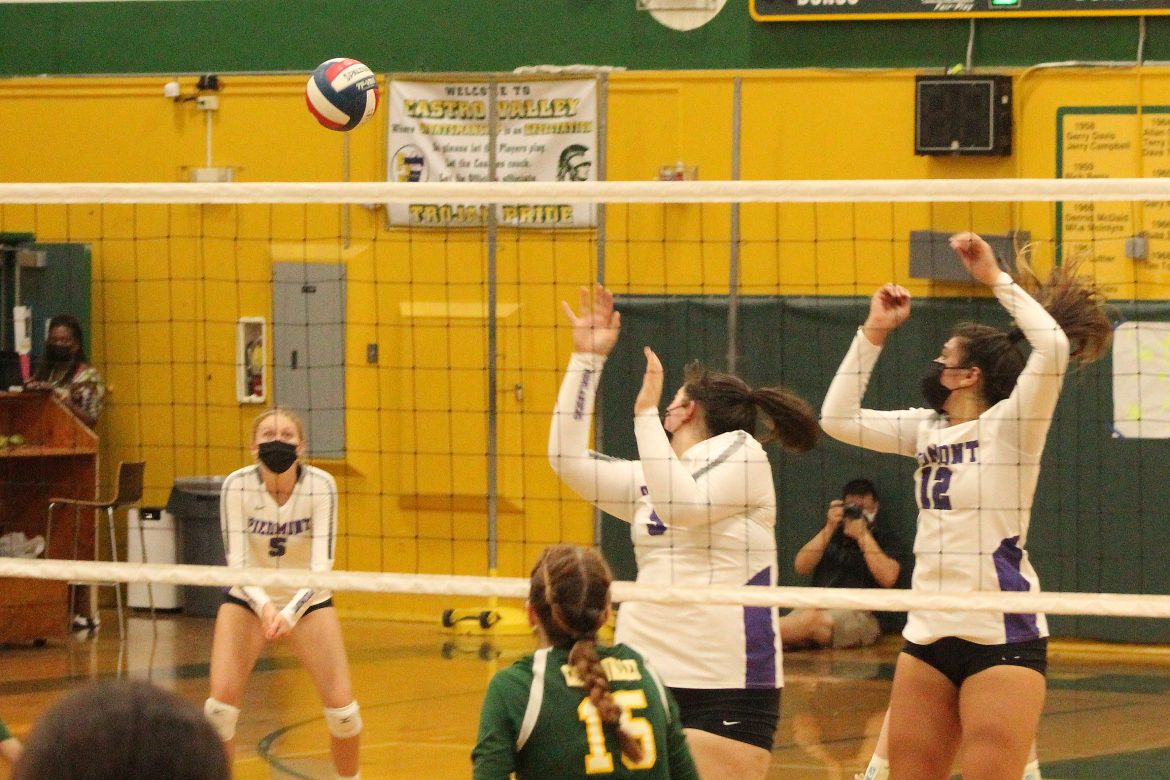 The tough loss came on the heels of a five-set defeat at San Leandro on September 21. Despite the losses, the players said the Highlanders are progressing.

“I think we really brought our energy up on the court, and I think we played a lot more cohesively than we have in the past,” Tara Kothari said. “I think that just shows how far we’ve come from the beginning of the season until now.”

“We need to close out these sets, but we’re definitely getting to that level.”

Said Shelby Cavenaugh, “I felt like we really held our own (against Castro Valley) and I’m really proud of how everyone played and I think we have improved so much this season. We were really working together as one team, we were super-focused and kept our energy up, and I think that was really positive.”

The Trojans got out to a 4-0 lead to start the first set but never ran away. The set was tied at 15-15 before Castro Valley took the lead for good. The strong hitting of Annika Conley and Lexy Krzyzanowski was too much to handle for Piedmont at times. The former had three monster kills late in the set, and the latter had the set-winner.

In the second set, the Trojans ran out to leads of 5-0 and 6-1. A block by Cavenaugh and Sofia Croley cut the lead to 13-10. But every time it seemed like the Highlanders might make a run, there was Conley pounding it down again. Lauren Au served out the set, with a winner on the final point.

The third set saw Piedmont get out to the early lead, scoring the first seven points of the set behind the serving of Eden Lorin.

“Eden is a really amazing server,” Cavenaugh said. “It was knowing where to serve. It gets everyone’s energy and spirits and confidence up.”

Unfortunately for the Highlanders, Castro Valley won the next five points to get right back in the set. The score was tied several times, but Conley then took over the serve with Castro Valley up 16-15. Conley recorded winners on her first two serves, and the Trojans never relinquished the lead.

“Coming from San Leandro, where we lost in five sets, I think we did really well tonight in terms of playing together, playing great defense, and putting the ball away,” Piedmont coach Leslie Blakely said. “We took something away from this game that we have the capabilities and can play together cohesively.”

“We walked away with things we need to work on, but we felt good overall about how we played. Castro Valley is a very good team.”

That progress is what the players are focused on.

“I think that we’ve come so far,” Talwatte said. “We trust each other on the court. Shelby has become one of our great hitters. Our team plays really well together.”