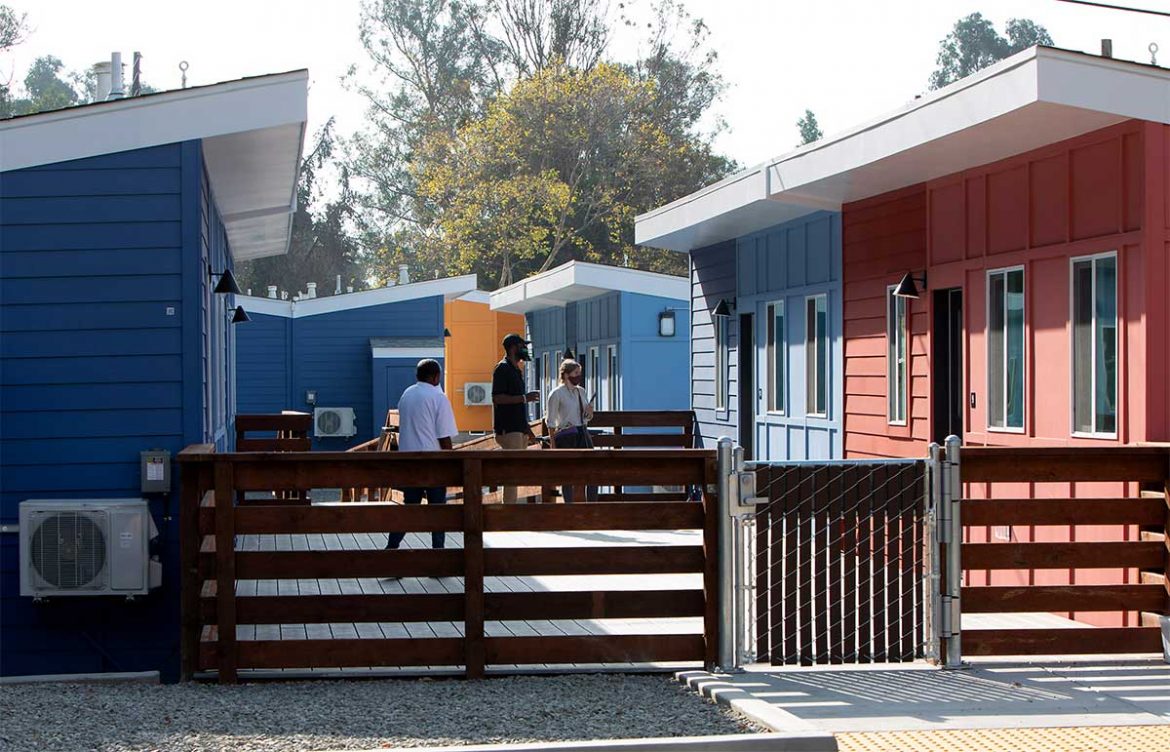 Ken Woodmansee, an unhoused man in Alameda County, was one of the first to park his van as part of First Presbyterian Church of Hayward’s park-out program.

He had Thanksgiving dinner with Pastor Jake Medcalf and his family, who found Woodmansee to be “a beautiful, kind and fun soul.”

Medcalf’s children especially loved Woodmansee and the family would stop to take him where he was going in the Hayward and Castro Valley area.

Medcalf outfitted a van with a futon so Woodmansee could recover from hernia surgery, but he never fully recovered and died of liver disease.

“We were two years late for Kenny,” Medcalf told the crowd at the formal opening of 35 tiny homes in unincorporated Alameda County near San Leandro this past Wednesday.

More than 8,000 people experience homelessness in the county each night and 79 percent of those are unsheltered or living in tents or vehicles.

The new homes, which have a bed, kitchenette, bathroom, and dining area, are located at 15400 Foothill Blvd., a former behavioral health care site.

“This project is literally saving lives,” said Medcalf, who also serves as founder and principal of Firm Foundation Community Housing, which participated in the development of the project.

Included among the 35 homes are 15 that will provide respite for unhoused people who are frail or ill but do not need to be hospitalized.

Medcalf said one of those units could have saved Woodmansee’s life.

Laura Guzman, who lives across the street from the project and is the chairperson for the county’s Health Care for the Homeless Commission, echoed Chawla’s belief.

“Without housing there is no health care,” Guzman said.

She called for the project to be replicated.

Of the 35 units, 28 are stand-alone units, while six are part of a modular building. The site is staffed 24 hours a day, seven days a week, and security guards are present.

Village residents are given access to county resources to find a permanent home, to get social services as well as to get medical and behavioral health care services.

The project was replicated from similar tiny homes built in the parking lot of the First Presbyterian Church of Hayward at 2490 Grove Way in Castro Valley.

Because of that project, the tiny homes that opened Wednesday took only 11 months to complete, despite some challenges with infrastructure and utilities, county officials said.

The project cost Alameda County about $8 million, or about $235,000 a unit, with at least some of the funding coming from the CARES Act, a stimulus bill passed by Congress last year.

Medcalf said many people who are homeless are on death’s door or on their way.

“We can’t ask them to recover without housing,” he said.