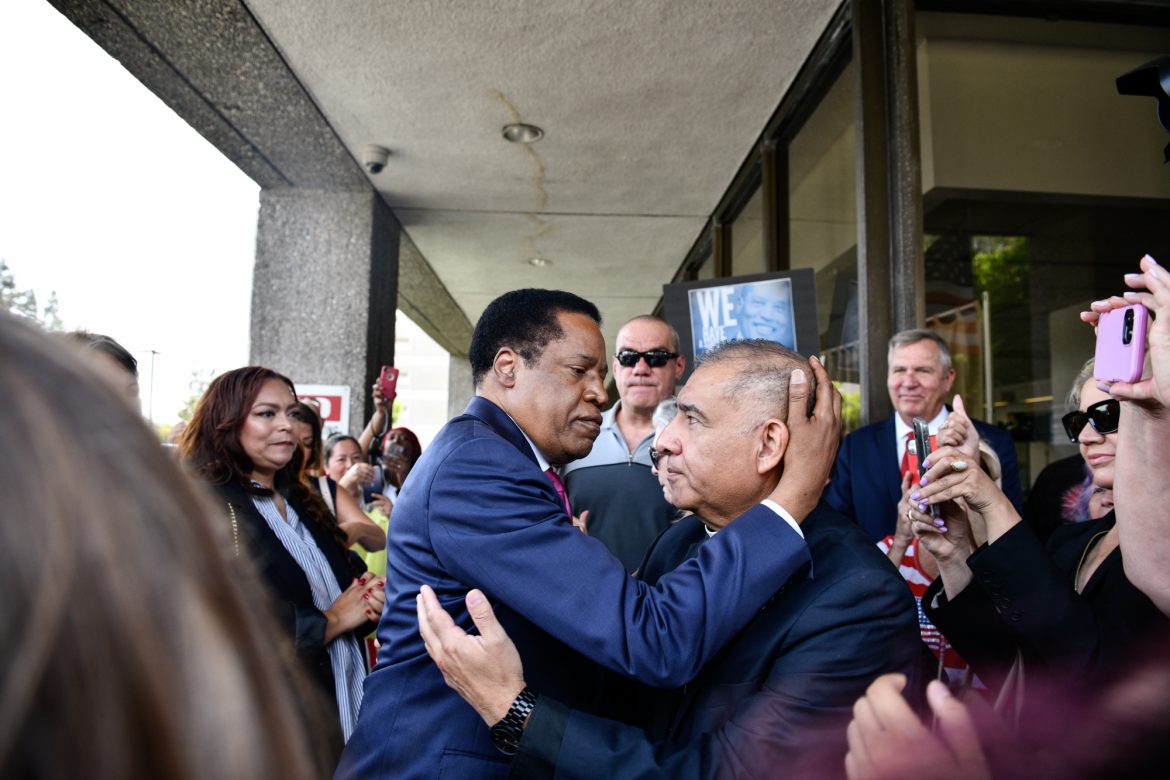 Conservative radio talk show host Larry Elder, embraces Bishop Juan Mendez from Churches In Action during a rally in Norwalk, on July 13, 2021. Elder announced his bid as a recall candidate for governor of California. Pablo Unzueta for CalMatters

With just one week until Election Day, time is running out for Gov. Gavin Newsom and his challengers to make their case to voters — raising the stakes of each campaign event.

Newsom brought out the big guns over the holiday weekend to help him rally against the recall, joining Massachusetts Sen. Elizabeth Warren in Los Angeles on Saturday and Minnesota Sen. Amy Klobuchar in Santa Ana on Sunday. Tomorrow, Vice President Kamala Harris — who cancelled an earlier visit amid the fallout from the U.S. withdrawal from Afghanistan — is slated to join Newsom at a campaign event in the Bay Area. By campaigning with three of the most powerful women in Democratic politics — all of whom ran for president in 2020 — Newsom appears to be trying to contrast himself with recall frontrunner Larry Elder, who has come under fire for previous comments he made about women.

With no prominent names on the list of seven certified write-in candidates Secretary of State Shirley Weber released Friday, the Sept. 14 race seems to be primarily between Newsom and Elder. The Republican talk show host, however, is focused not so much on gender as he is on race, according to a new profile from CalMatters political reporter Ben Christopher.

Indeed, the recall election has reignited debate over the best approach to reduce crime, protect public safety and do right by both victims and offenders. It’s also brought renewed attention to California’s housing crisis. Though major Republican candidates say the solution is clear — scrapping the California Environmental Quality Act — the reality is far more complex than that, CalMatters’ Manuela Tobias reports.

Back to Elder’s focus on race: His campaign has prioritized mobilizing Asian and Latino voters, and his rhetoric — which evokes “rancho libertarianism” — makes him, a Black man, the “most Latino candidate” in the recall, in the words of Los Angeles Times columnist Gustavo Arellano.

Still, Arellano argues that Elder is pushing Latino voters away with his stance on illegal immigration and his decision to seek political counsel from former Republican Gov. Pete Wilson, who supported a 1994 ballot measure — approved by voters but later declared unconstitutional — to block undocumented immigrants from accessing public services. Sean Walsh, Wilson’s spokesperson and law partner, said that Wilson has not endorsed any recall candidates and has offered political advice — such as how to work with a Democratic-majority Legislature — to most of the leading GOP challengers.

To wrap up my series on California’s living governors, I asked them if they thought the state’s recall process should be reformed. Gray Davis, the only California governor to ever be recalled, argued the ballot should be whittled down from two questions to one. Jerry Brown declined to comment, and Arnold Schwarzenegger did not respond to a request for comment. Over email, Wilson told me he doesn’t think the process should be reformed, noting it’s “exceedingly rare” for a recall to qualify for the ballot.

“Clearly, they felt strongly about removal in this case,” he said.

California has administered 47,413,513 vaccine doses, and 67.3% of eligible Californians are fully vaccinated.

Speaking of the recall, Californians living in the 15 counties that operate vote centers were able to cast their ballots in person starting Saturday. More than 5.7 million of the state’s 22.2 million active registered voters had already returned their mail-in ballot as of Friday — 53% of which came from Democrats, 26% from Republicans and 20% from no party preference voters, according to Political Data Inc.

As candidates look to turbocharge voter outreach in the last week of the campaign, Newsom has a clear financial advantage over his challengers, CalMatters’ campaign money tracker shows: As of Monday, recall opponents had raised nearly $69 million, compared to the $11.6 million raised by recall supporters. Campaign finance reports filed last week put the numbers into even starker relief: From Aug. 1 to Aug. 28, the governor’s anti-recall committee spent $30.2 million, raised $19.8 million and had $17.2 million in the bank, while Elder — who brought in the most money among Newsom’s top challengers — spent $6.2 million, raised $8.6 million and had $4.7 million in cash on hand.

One more election update: State lawmakers on Friday sent to Newsom’s desk a bill that would make permanent California’s pandemic election procedures by sending mail-in ballots to every active registered voter for every election in the state. The proposal passed on a party-line vote: Every lawmaker in favor was a Democrat and every lawmaker opposed was a Republican.

Today, state lawmakers will begin a final round of hearings to hammer out the last details of California’s record-breaking $263 billion budget — for the fiscal year that began July 1. (If you’re confused about why the Legislature is still fiddling with a budget that went into effect more than two months ago, check out this quick primer from CalMatters’ Ben Christopher.) Alongside the 16 newly introduced budget bills, lawmakers are racing to decide the fate of hundreds of proposals before the legislative session ends Friday. Buckle in for a busy week!

In the meantime, here’s a look at some recent financial announcements from state leaders:

Hospitals in the eight-county San Joaquin Valley are running out of available intensive-care beds, the state Department of Public Health said Friday, triggering special “surge” rules that require nearby facilities to accept transfer patients from hospitals that have less than 10% ICU capacity for three straight days.

As of Sunday, the San Joaquin Valley region had 8.9% ICU capacity — with more than 53% of its ICU beds filled by COVID patients — while the Greater Sacramento region had 14% ICU capacity, Northern California 21.4%, Southern California 22.2% and the Bay Area 25%, state data show. Although coronavirus hospitalizations and ICU admissions appear to be plateauing statewide, the virus continues to ravage areas with lower vaccination rates — forcing numerous rural California schools to close temporarily, according to EdSource.

As hospitals fill up, California’s nurse shortage is becoming more apparent. More than 20,000 job advertisements for registered nurses were posted in the two-month period ending Aug. 17 — making nursing the most in-demand occupation in the state, according to a Labor Day report from the state Employment Development Department. Meanwhile, a Monday report from the UCSF Health Workforce Research Center on Long-Term Care estimated that California is currently short nearly 41,000 full-time equivalent registered nurses — a gap that will likely persist until 2026.