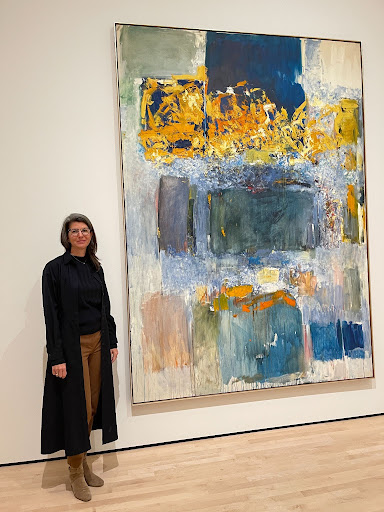 Sarah Roberts of Piedmont, Andrew W. Mellon Curator and Head of Painting and Sculpture at SFMOMA. Standing next to ‘La Ligne de la rupture’ (1970-1971) by Joan Mitchell, on loan from a private collection.

In a groundbreaking retrospective at the San Francisco Museum of Modern Art, the life and work of painter Joan Mitchell (b.1925- d.1992) is presented on a symphonic scale that brings both the artist and the artwork into focus. To advance through the exhibition galleries filled with over 80 of Mitchell’s paintings and works on paper as well as her sketchbooks, letters, books, and photographs is to experience the world from the artist’s perspective, a world composed of color, memory, action, and emotion.

The exhibit was co-organized by SFMOMA and the Baltimore Museum of Art (BMA) and co-curated by Sarah Roberts, Andrew W. Mellon Curator and Head of Painting and Sculpture at SFMOMA and Katy Siegel, BMA Senior Programming and Research Curator and Thaw Chair of Modern Art at Stony Brook University.

Roberts, a Piedmont resident, spoke to the Exedra about what it has meant to her as a scholar and long time admirer of Joan Mitchell’s art to bring a deeper understanding of Mitchell and her work to life.

Standing in front of Mitchell’s painting “La Ligne de la rupture” (1970-1971), a huge, lush oil filled with a mixture of transparent teals, blues, oranges, and golds, Roberts described the sense of satisfaction she feels at finally seeing the paintings together in one exhibition. The exhibition represents nearly four years of work by seven researchers from both museums as well as the Joan Mitchell Foundation. Between Roberts and Siegel, they traveled worldwide during this time to see over 500 paintings, working with private collectors and institutions to ensure that the work in the exhibition would represent the full arc of Mitchell’s 40 year career. In addition, Roberts and Siegel co-authored the illustrated catalog accompanying the exhibit.

In the United States, Mitchell has been closely associated with the Abstract Expressionist movement of New York in the 1950’s. However, one of the outcomes of this exhibit is to expand understanding of Mitchell’s work to include the way she grew her practice during the three decades she spent in France. As Roberts puts it, “Mitchell was an artist in complete command of her craft. She pushed her colors, she used the entire ‘real estate’ of the canvas, she was willing if necessary, to make art that was ‘not pretty’ in order to present a deliberate image of what she was feeling.” Roberts describes Mitchell as an artist who changed abstract painting through a psychological component that was different because she “opened up to the full spectrum of feelings and color, tenderness to rage” and through her direct references to landscape.

Working closely with the Joan Mitchell Foundation, both Roberts and Siegel were able to review early paintings by Mitchell never before shown, as well as books of poetry and student sketchbooks that tie Mitchell’s lifelong love of poetry with its access to feeling and emotion to her evolution as an artist. Roberts describes Mitchell as a “painter without equal, a complex person who led a complicated life whose work is completely convincing.”

Joan Mitchell will be at SFMOMA through Jan. 17, 2022 and includes 10 paintings not traveling to other venues. Joan Mitchell will be on view at the BMA from March 6 – August 14, 2022, and a version of the exhibition will open at the Foundation Louis Vuitton in Paris in fall 2022.