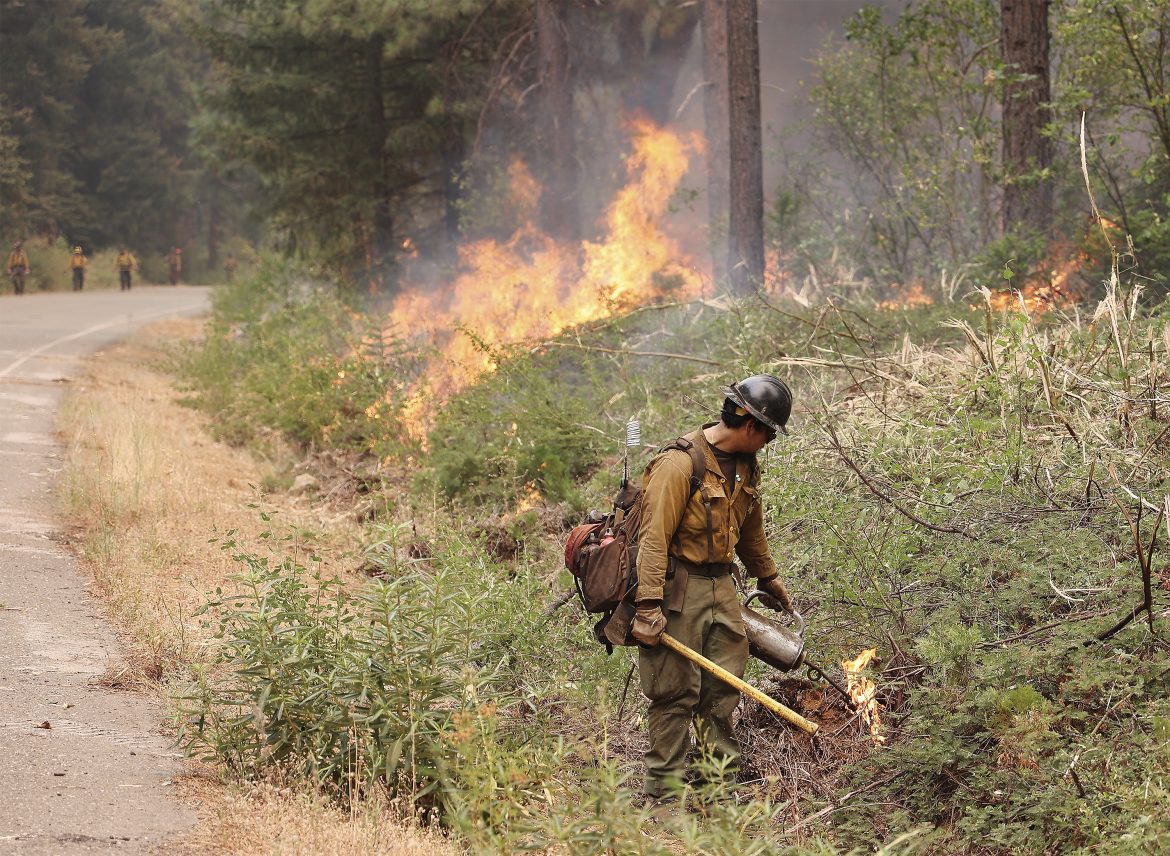 A member of the US Forestry Service uses a backfire torch while fighting the Caldor Fire in El Dorado County, Calif., on August 20, 2021. (Photo courtesy CALFIRE)

With roughly 2 million acres already burned across California this year, the state is on pace with the number of acres burned at this time last year, according to Porter, who described the fires of the last two years as “the new reality.”

“Some have turned to looking forward as if this is now fall, summer season is over,” Porter said, referencing Labor Day weekend as the traditional but unofficial end of summer.

“We’re right smack in the middle of wildfire peak season.”

Ultimately, some 4 million acres burned across the state in 2020.

Porter said that while “nobody has a crystal ball” to predict how many acres will burn in 2021, a recent three-month outlook from Cal Fire’s weather forecasters showed consistently dry conditions, more wind events and additional fires.

State officials are also proceeding with hazardous waste and fire debris cleanup efforts via the California Office of Emergency Services’ Consolidated Debris Removal Program, which coordinates with county governments to clean up fire debris for free. Hazardous material and debris removal has already begun in counties affected by the Tamarack Fire, the Beckwourth Fire, the Dixie Fire, the Lava Fire, the Cash Fire, and the River Fire.

According to Cal OES Director Mark Ghilarducci, the debris removal program is also set to begin in the South Lake Tahoe areas affected by the Caldor Fire, which has burned more than 216,000 acres and is 49 percent contained, as of Tuesday. Ghilarducci noted that residents who begin their own debris removal process without first checking with their county could make them ineligible for the state’s cleanup services.

State and federal officials advised residents to remain alert for potential fires in their area in the coming months and be ready to evacuate, if necessary.

“We need everybody in California to keep their eyes open,” Porter said. “See smoke — call it in, don’t expect somebody else already did. And if you get evacuation orders, get out so we can do our job of protecting lives, property and the environments.”

Information about ongoing fires can be found via Cal Fire at https://www.fire.ca.gov/incidents.

California residents can also find information about how to prepare for wildfires and potential fire-related evacuations at https://www.readyforwildfire.org.