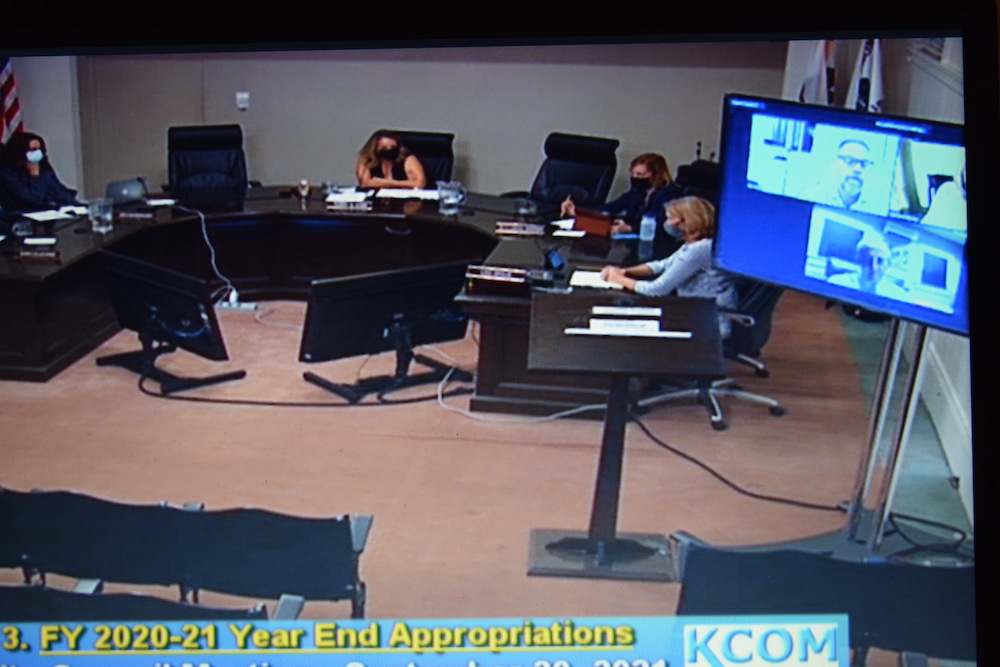 The City Council on Monday authorized city staff to solicit bids for pavement rehabilitation and a pedestrian and bicyclist safety project covering the west end of Oakland Avenue.

There also will be some “long-awaited” pedestrian and bicyclist safety improvements, City Administrator Sara Lillevand said, as well as completion of the ends of the railings on the Oakland Avenue bridge above Beach Elementary School. Mayor Teddy Gray King was excited about that railing work finally being done — “getting it to a state where we’ve always envisioned it.”

At Oakland Avenue’s intersections with Howard Avenue and Sunnyside Avenue, rectangular rapid flashing beacons will be installed to alert motorists of pedestrians crossing at those locations. And in accordance with the 2014 Bicycle and Pedestrian Master Plan, Class 2 bicycle lanes will be striped from the city limits to Sunnyside Avenue (the west end of the bridge), and Class 3 bike route signs and sharrows — the v-shaped painted figures indicating a lane vehicles and bicycles share — will be installed from the west end of the bridge east to Grand Avenue.

Councilwoman Conna McCarthy said this project — on which could begin in October or November should bids be received as planned — is multifaceted.

“This is not just a paving project — this is a safety project,” she said.

Of the cost, $471,300 will come from Alameda County Measure B transportation tax funds, and $168,000 will be paid through a “One Bay Area” grant through Caltrans and the Metropolitan Transportation Commission.

Before the unanimous vote was taken on the Oakland Avenue work, the council voted 5-0 to approve moving $3.5 million from the city’s general fund to its Facilities Maintenance Fund, and another $1 million to its Pension Rate Stabilization Fund.

This move was made possible, city Finance Director Michael Szczech told the council, mostly thanks to a much better than expected year for real property transfer tax revenues from home sales in Piedmont, and from building permit and planning fees. The combined “favorable revenue variance” from those sources, Szczech said, was $4.9 million.

And the council was happy to guide that money toward a huge need in Piedmont — helping maintain and repair old city buildings, some in dire need of major repairs. It’s been a topic of council discussion for years.

Councilwoman Betsy Smegal Andersen said many of these buildings’ problems aren’t noticeable to the casual observer, but that city leaders are well aware of the need for repairs.

“We’ll never save our way to fixing these buildings,” Andersen said.

Szczech said such unpredictable income can’t simply be built into the city’s 2021-2022 budget.

“While a path forward remains elusive, the lack of funding is crystal clear,” Lillevand said.

But Councilwoman Jen Cavenaugh said the situation can, at least partly, be remedied now.

“Now we can go back and fix some of the things we wanted to fund at the start of the budget cycle,” she said.

The $1 million, Szczech said, will go to help pay for increasing city employee pension-related costs through the California Public Employees’ Retirement System. Investment returns for that agency are expected to continue to drop, forcing premium costs for Piedmont (and all participating California cities) up.

Monday night’s council meeting was described as a “hybrid” meeting. Three councilmembers, King, Cavenaugh and Anderson, were in council chambers, as were Lillevand and Deputy City Clerk Lisa Argue — at the dais not used since before the COVID-19 pandemic began in March 2020. The other two council members, Vice Mayor Tim Rood and McCarthy, and other city staff, were taking part remotely. Aside from a few short sound dropouts, the technology worked seamlessly.

King thanked City Clerk John Tulloch and Argue for their efforts to make it happen.

“I think it’s an important step in trying to get back to normal,” King said.