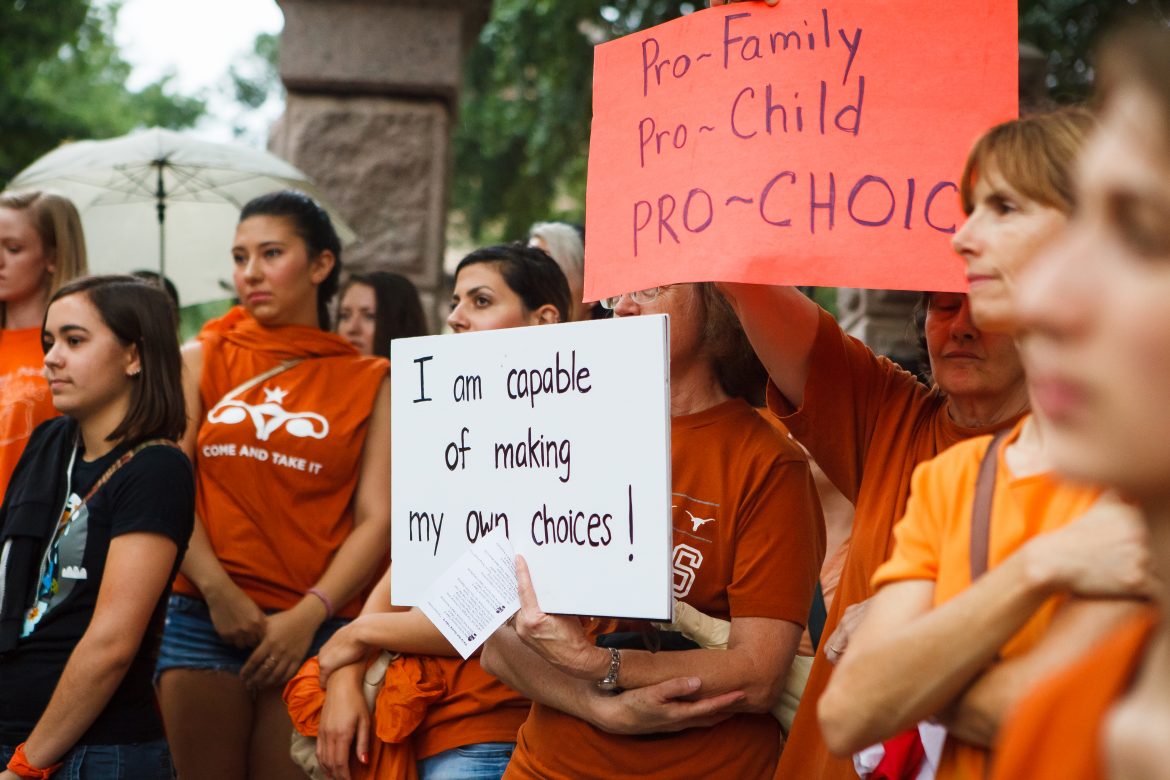 Protesters in 2013 against a since-overturned Texas law that heavily restricted access to abortion. (Image courtesy of mirsasha on Flickr)

Bay Area and state officials lambasted both the U.S. Supreme Court and the Texas state government after the high court declined to approve an emergency petition to stop a Texas law banning abortions six weeks or more after conception.

Texas Gov. Greg Abbott signed the law, Senate Bill 8, in May, but it went into effect Wednesday at 12:01 a.m. local time.

Late Wednesday night, the court issued a 5-4 ruling, with Chief Justice John Roberts joining the court’s three liberal justices in the minority, declining to rule on the petition, which was filed by Texas abortion clinics.

The court could still strike the law down in the coming days as unconstitutional, but abortion rights activists expressed skepticism that the court would do so after letting the law go into effect in the first place.

The law effectively overwrites the precedent set in 1973 by the court’s ruling in the case of Roe v. Wade by preventing pregnant people from seeking an abortion after their sixth week of pregnancy, a time when many people are not yet even aware that they are pregnant.

Rep. Barbara Lee, D-Oakland, called SB 8 “one of the most severe attacks on reproductive rights” in U.S. history.

“SB 8 is an appalling violation of human rights and reproductive rights, and will put the health of millions of people in jeopardy, especially for low-income people and people of color,” Lee said in a statement.

SB 8 does not make exemptions for pregnancies resulting from rape or incest and allows people to sue doctors, medical staff and even a patient’s ride to a medical clinic if they suspect the patient has had an abortion after six weeks.

Plaintiffs also are not required to show damages or have a connection to the patient to file a lawsuit under SB 8, and are entitled to $10,000 and their legal fees if a judge rules in their favor.

“This provision is a cynical, backdoor attempt by partisan lawmakers to evade the Constitution and the law to destroy not only a woman’s right to health care but potentially any right or protection that partisan lawmakers target,” Pelosi said in a statement.

“This decision is not the last word on Roe v. Wade, and we will not stand by and allow our nation to go back to the days of back-alley abortions,” Harris said in a statement. “We will not abide by cash incentives for virtual vigilantes and intimidation for patients.”

Jodi Hicks, the CEO and president of Planned Parenthood Affiliates of California, argued in a statement that the Supreme Court’s decision will inevitably lead to other states passing their own abortion restrictions.

Nearly a dozen states have already passed so-called “abortion trigger laws” that would fully outlaw the practice in the first and second trimesters as soon as Roe v. Wade is overturned.

“The inaction by the Supreme Court on a blatantly unconstitutional ban has taken away a crucial right to millions of people in Texas and without a doubt threatens their ability to make decisions about their body, their lives, and their futures,” Hicks said.

On Thursday, Pelosi announced that the House of Representatives will formally take up legislation to codify abortion rights in federal law instead of relying on the court decision alone.

However, that bill, the Women’s Health Protection Act, is unlikely to find enough support in the U.S. Senate to reach President Joe Biden’s desk for a signature.

Biden said in a statement Wednesday that SB 8 “blatantly violates” the decision in Roe v. Wade and pledged to defend abortion rights across the country, but did not elaborate on what that might entail.

Assemblywoman Buffy Wicks, D-Oakland, argued in a Twitter post that the purpose of SB 8 is clear: “to intimidate women (and) providers.”

“It cannot stand,” she said.

Meanwhile, in TX, a 6-week abortion ban is taking effect. And to enforce this illegal ban, it gives anyone the right to sue “those who help women access abortions.”

The aim of this outrageous law is clear: to intimidate women & providers.