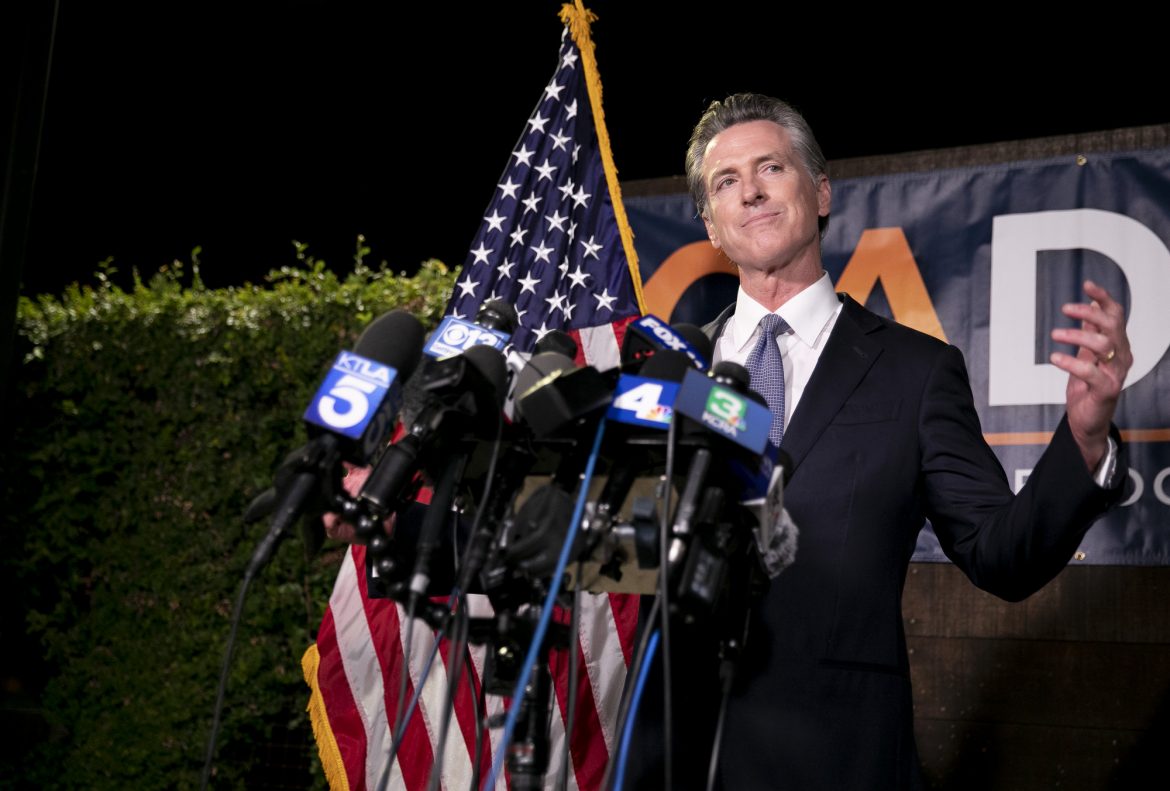 Gov. Gavin Newsom gives a speech following his projected victory in the recall election at the California Democratic Party headquarters in Sacramento on Sept. 14, 2021. Photo by Anne Wernikoff, CalMatters

For weeks leading up to Election Day, Gov. Gavin Newsom and Democratic leaders begged Californians to “just say no” to the recall. Rather than pore over the 46 names on the ballot to pick a promising — or for Newsom supporters, at least tolerable — back-up candidate in case the recall succeeded, the “no” campaign urged voters to skip the second question entirely.

Of the 9.3 million ballots counted so far, 4.1 million, or 44.5%, did not include a choice for the replacement candidate. That’s compared to the 2.4 million votes, or 26%, that went for the flesh-and-blood frontrunner Larry Elder.

If “nobody” were a candidate, he or she would be crushing the competition.

Ballots are still being tallied, but at last count the recall attempt against Newsom is going down in flames by a historic 28 percentage points. The secretary of state’s office reported today that about 2.9 million remain to be counted.

Newsom and his political brain trust were criticized, even by some Democrats, for refusing to engage with the ballot’s second question. The logic of the strategy: Don’t even humor the idea that another candidate would be acceptable, lest it convinces some voters on the fence that a “yes” vote wouldn’t result in sheer disaster. As some commentators noted at the time, it was a risky and potentially undemocratic tactic.

But it’s one that seems to have paid off handsomely.

The two-question structure of California’s recall ballot was the subject of endless confusion among voters. Now it’s providing new ways to be perplexed by — or perhaps to purposefully misinterpret — the election results.

Elder has already touted his 47% showing among voters who picked a replacement candidate as evidence of his strength as a possible 2022 candidate and to suggest that polls understated his popularity. In a tweet today, he juxtaposed the reported election night results to an Emerson College poll that put the candidate at a mere 23%.

In fact, the number Elder highlighted was his share of the vote only among ballots marked with a replacement candidate. Missing from his calculation: The 4 million-plus ballots without a selected candidate at all.

A historical note: In the successful 2003 recall of Democratic Gov. Gray Davis, only about 756,000 of 9 million voters, or 8%, left question two blank.

And in case it wasn’t obvious that it was mostly Democrats who left question two blank, there is an indisputable correlation in counties with the largest share of Democratic voters.

For the many “no” on recall voters who didn’t want to surrender their influence on a potential replacement candidate, there were no obvious choices. Kevin Paffrath was the most prominent Democrat on the ballot, but his mish-mash of policy positions and lack of experience weren’t every party member’s cup of tea.

Other liberals held their nose and backed former San Diego Mayor Kevin Faulconer, as suggested by the Los Angeles Times editorial board, who called the relatively moderate Republican the “least terrible” option.

Still, other “no” voters did their own research, with a surprising number gravitating to the little-known campaign of San Diego physician and attorney Brandon Ross. Despite his low name ID, at last count, Ross, a Democrat, was beating out Republican hopefuls John Cox, Caitlyn Jenner and Assemblymember Kevin Kiley.

Paffrath, Faulconer and Ross all tended to fare best in those corners of the state that rejected the recall most overwhelmingly. But alas, none could hold a candle to this year’s electoral juggernaut — no one at all.