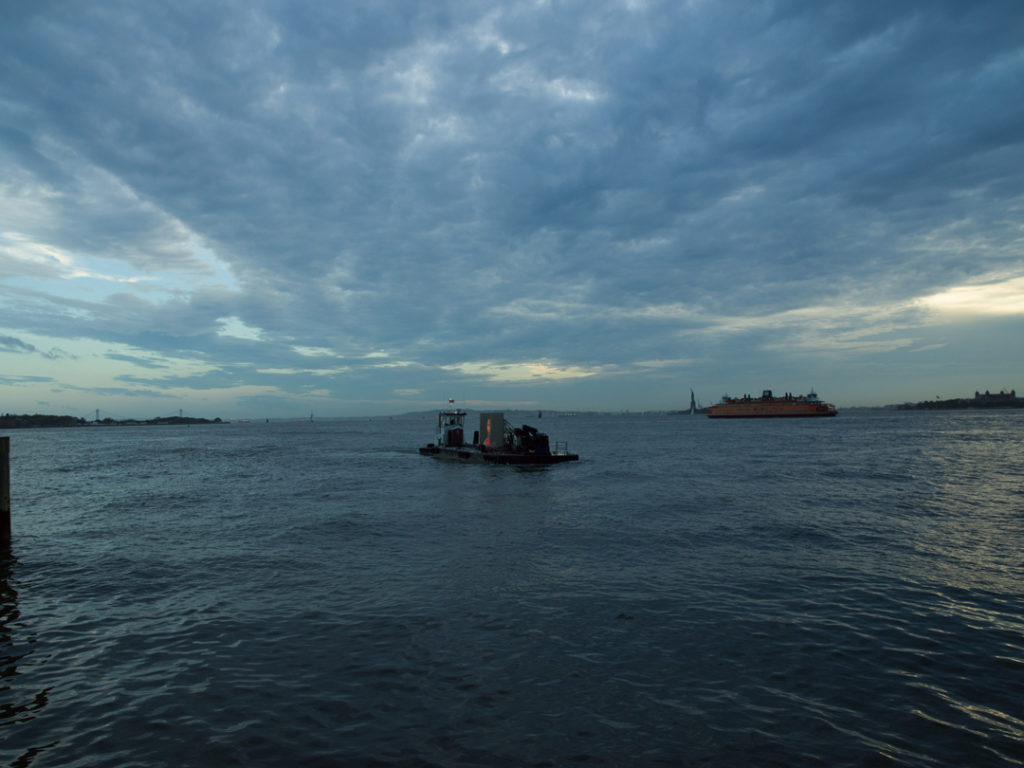 “How do I get art in front of people?”

For Clark, visual artist Shimon Attie’s “Night Watch” — a media arts installation featuring a large, high-resolution LED screen on a floating barge — was a “COVID proof” project to get behind.

The installation is co-produced by BOXBLUR, Clark’s initiative to bring visual and performing art into dialogue within her gallery space, and Immersive Arts Alliance, a nonprofit that presents immersive, experimental art from the global arts community.

“Through the entire pandemic, the focus has been ‘How do I continue to get our energy in front of people if they can’t walk physically into my space?’,” Clark says. “With this project, we knew we could be outside a lot more safely than inside.”

The film displayed on the barge’s 20-foot-wide LED screen focuses on 12 refugees from five continents. As Clark explained, some of the refugees featured in these “video portraits” identify as LGBTQIA+; others are under 18; all have their own particular stories and reasons for fleeing their countries. However, the film itself is silent: Each individual walks from the background to the foreground and pauses, and then the next one appears.

“There’s a certain contemplative aspect to it,” Clark says of the film in an interview. “It has a kind of gravitas … nobody’s defining themselves.”

Many refugees enter the United States via waterways, so presenting the installation on a barge has particular relevance. As Clark explains, “Shimon [Attie] felt like from an accuracy standpoint and also from a metaphoric standpoint that showing the work on the water is really important.”

The barge’s departure from Angel Island on Friday, the inaugural night of its activation, is also significant: Historically, the island was a West Coast point of entry for many immigrants.

Thoughtful considerations like these have factored into every aspect of “Night Watch” — including when to have the installation “set sail” on the San Francisco Bay. Ultimately, September was selected due to the nice, warmer weather and the decreased likelihood of elements that could damage the technology on the barge, such as rough water and rain, and that could affect the LED screen’s visibility, such as fog.

And seeing the dozen refugees on the LED screen, as the barge slowly proceeds along its course, is key.

While Attie’s artwork is unquestionably social justice-focused, addressing the issue of political asylum, it also asks viewers to see these and all refugees in the most straightforward of ways: as people.

Clark says, “They’re just asking you, in a sense, to look at them as human beings. So, in that way, it’s not even political. It’s really about these people’s humanity. It’s about how we see ourselves in them.”

What a valuable perspective to have and hold of one another during a pandemic that continues to affect everyone.

All times are estimates, and subject to change.

Friday
Free, Fort Mason Center for Arts and Culture, 2 Marina Blvd., San Francisco. Pre-registration for seats at the Cowell Theater has sold out.

Sunday
Free, the “Night Watch” barge will travel along the shoreline of the Oakland Estuary.