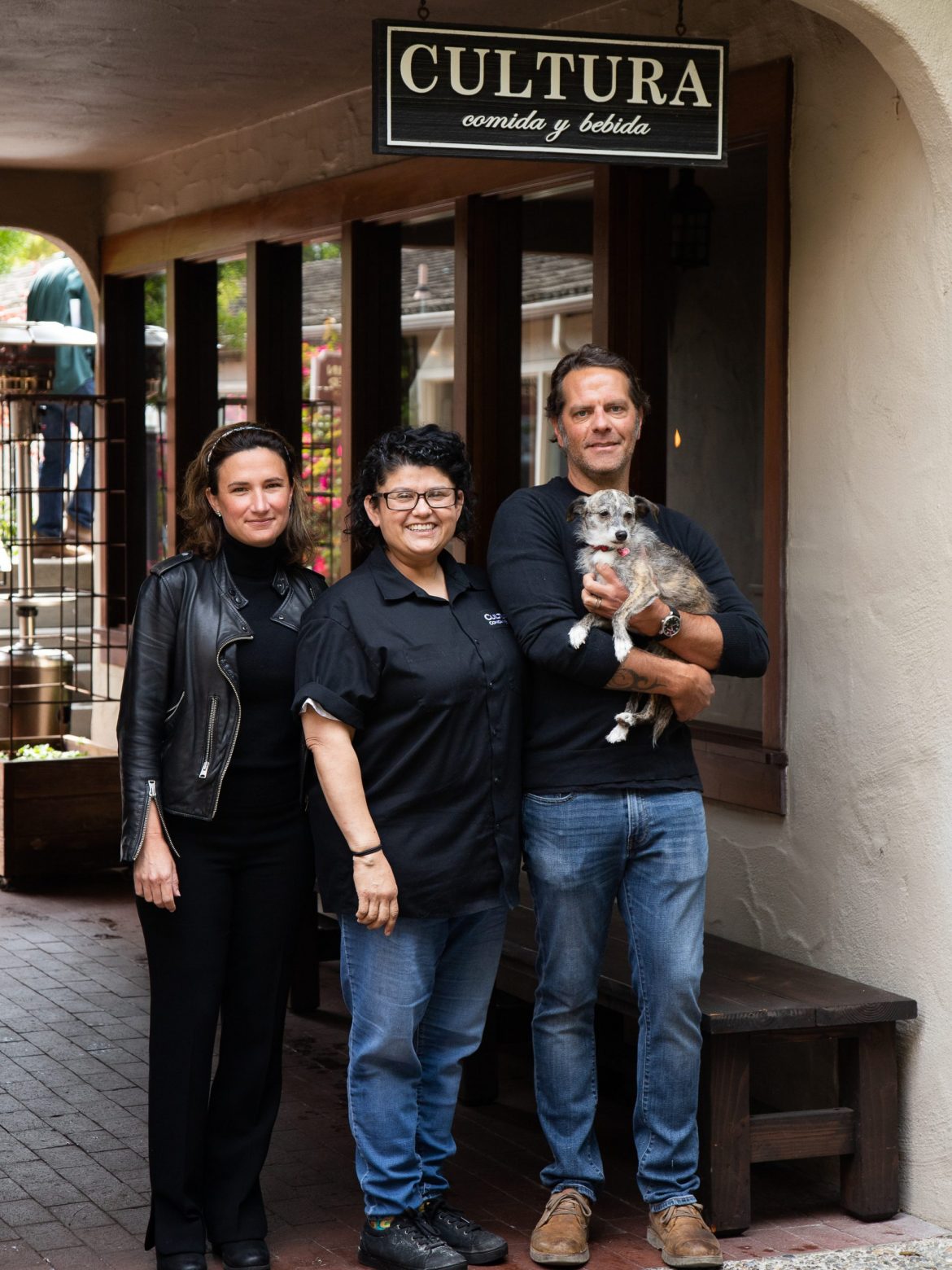 The plea went out on Instagram: Cultura Comida y Bebida was short staffed. The Carmel-by-the-Sea restaurant could no longer offer its Oaxacan-inspired lunch and might have to cut one evening of dinner service if it wasn’t able to hire more kitchen staff within the week. So, the owners opened up a referral bonus program to the entire community. Anyone who introduced them to someone they eventually hired would receive a $200 gift card. The new employee would, too.

“Literally if one more person leaves,” Sarah Kabat-Marcy, one of the restaurant’s managing partners, said. “I don’t know what we’re going to do.”

After five years of little turnover, the restaurant lost several employees in the past couple of months to larger operations, including luxury hotel restaurants that could pay kitchen staff $37 per hour, Kabat-Marcy says. She and her husband Michael Marcy, who is also a managing partner, increased their kitchen staff’s pay by 20%. Now, kitchen staff make between $20 and $23 per hour. They deserve it, she said, and the cost of living is high in the coastal city. But there’s no way they could match the wages of larger operations, she said. The profit margins are too thin; the restaurant would go under.

In the meantime, hostesses and servers have volunteered to help out in the kitchen. The head chef’s retired parents have even come in and helped make tortillas.

The restaurant has slimmed down its menu based on conversations with the kitchen staff about which dishes were easiest to prepare. Neither Kabat-Marcy nor her husband have drawn paychecks from Cultura in over a year. Kabat-Marcy took a second job during the pandemic so that the couple could pay their bills.

“We’re just on the hairs edge of staff totally burning out,” she said.

Businesses across the state are rebounding, but are struggling to fill job openings, especially in the service industry. Several factors may be at play, including enhanced unemployment benefits, uncertainty around child care and concerns about COVID-19 exposure. Workers may also be trying to launch new careers or shift to jobs with more regular hours, better working conditions and better pay. But the gap is there. According to state data, employment increased by just 24,500 in June even though employers added roughly 73,500 non-farm jobs, meaning thousands of positions were left open.

That’s translated into a boon for workers. Over the past three months, wages for Californian workers in the leisure and hospitality sector have risen much faster than wages for all private employees. Between March and May, the most recent period for which data is available, average wages for private employees rose by 1.2%, while wages for leisure and hospitality workers increased by 5.7% according to the U.S. Bureau of Labor Statistics.

Still, service sector workers are paid much less than workers in many other industries. Average weekly pay for Californian leisure and hospitality workers in June, for example, was around $600, according to the Bureau of Labor Statistics. For all private workers, it was almost $1,250.

Dara Maleki, owner of The Pizza Press, a chain of newspaper-themed pizza restaurants that has 15 locations in California, says for every applicant he gets, “there’s five employers going after the same person.”

That’s a sharp turnaround from last year when the statewide shelter-in-place order and subsequent pandemic restrictions caused mass layoffs in the service sector. In April 2020, the U.S. hospitality industry lost approximately 7.7 million jobs, or about half of the workforce, according to federal data. California saw a similar loss. In April 2020, the number of people working in hospitality and leisure dropped by more than 45%, according to state data.

Now, employers are scrambling to rehire those workers. Some are competing for applicants by increasing wages, dangling incentives and adding benefits that haven’t typically been offered in the food and service industry.

Reign Free, founder and CEO of Red Door Catering in Oakland, has been struggling to fill about 15 roles. One challenge, she says, is that part-time on-call staff can actually make more money from unemployment benefits.

Larry Cromwell, who owns Maribou salons, a chain of four salons in Folsom and Roseville, says he had always wanted to let stylists own shares of the company. When he saw salons shutting down and stylists leaving the industry during the pandemic, he knew he had to have a competitive employment package.

Cromwell raised the price of salon services twice, which translated into higher pay for Maribou’s stylists. He also launched a program that allowed stylists to buy 1.6% of the company’s stock if they meet several benchmarks—pegged to the number of clients they see in a month, for example, and their rebooking rate—and if they exhibit leadership qualities. They receive quarterly dividends, and as the company grows the value of the stylists’ shares grows too. Right now, the chain has five stylists who are shareholders and is trying to motivate more to qualify and join the program.

Another edge Cromwell had over many salons when competing for new applicants is a 401(k) program he launched in January 2020. More than half of the stylists are enrolled in the program, which Maribou matches at 4%.

Employers are increasingly offering 401(k) matching programs and retirement plans, says Vinny Catalano, senior vice president of employee benefits at Lockton Companies LLC, a large insurance brokerage. He says that younger workers express a lot of interest in being able to plan financially for their future. “Employers are starting to respond to that.”

Eventually, Cromwell hopes to add healthcare coverage for his employees. “That’s a tough one,” he says, because costs have gone up so much.

Cromwell said that adding health benefits now would swallow up what remains of his slim profit margin. But he still hopes to make it work sometime in the future. “If it’s one of the last things I ever do I’m going to get it.”

The difficulty with hiring isn’t concentrated in one region or one industry.

It’s the number one issue that Scott Miller, CEO of the Fresno Chamber of Commerce, says he’s hearing about from member businesses. Some are doing standing daily interviews, where people can walk up and interview for jobs on the spot without having applied—something Miller says he’s never seen before in his career.

Up in Redding, businesses are facing a similar situation, says Michelle Nystrom, regional director for O2 Employment Services, a staffing company. Hiring has become so difficult that she’s been pushing the employers she works with to focus on retaining their current employees with additional compensation.

She’s also seeing workers, including those in manufacturing, demand flexibility or express interest in working from home.

Some manufacturers are looking at offering alternative work weeks, like four 10-hour days, or half days on Fridays. Others are considering offering their employees paid volunteer hours that they can use on approved activities, including helping out at their kids’ schools.

“For positions like manufacturing, they’ve never had the luxury of going to their kids’ daytime performances or field trips,” Nystrom said. “That’s kind of a big deal.”

Mitchell Sjerven, who owns bouchon, an upscale restaurant in downtown Santa Barbara, had to shut down his restaurant twice during the pandemic, and each time laid off staff. The first time, in the spring of 2020, he was able to hire all of his staff back. After the second shutdown and layoff, some staff had moved on to different jobs. Now he’s short three staff out of 26.

To fill those positions, Sjerven increased wages by 20%, and in some cases 30%. He started offering $100 as a signing bonus. Then he bumped it up to $250, and then to $500. Now he’s offering a $1,000 signing bonus for line cooks. But, he says, the incentives haven’t worked as he hoped they would; they’ve mainly resulted in workers switching between restaurants rather than drawing more workers to the industry.

In the meantime, he says, the majority of new restaurants he’s seeing succeed have decreased their labor costs, by offering counter service, for example, or focusing on takeout. He believes bouchon might be on the tail end of the success of the full-service dining model.

As wages go up in the industry, Sjerven hopes customers will understand their food — and the pleasures of interacting with humans — will come with a higher price tag.