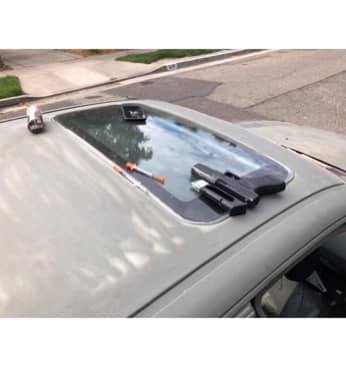 Suspected heroin and a replica firearm found in suspects' car on August 13.

Two suspects were taken to Santa Rita Jail in Dublin after being pulled over in Piedmont on August 13. A stolen vehicle triggered the Automatic License Plate Reader (ALPR) at Park Boulevard and St. James Drive around 5:15 p.m. Piedmont Police Department officers found the vehicle parked on the 1600 block of Trestle Glen Road.

The vehicle was returned to its owner.

Another stolen vehicle was recovered on August 9 at approximately 5:25 a.m. An ALPR hit was recorded on a 2018 Jeep Renegade traveling northbound on Grand Avenue at Wildwood Avenue. The vehicle was reported stolen out of Richmond.

Police located the vehicle on the 1600 block of Grand. The car was stopped by police and the driver was taken to Santa Rita where he was booked for possession of a stolen vehicle.

Later on the day of August 9, the ALPR registered another hit on a stolen vehicle. According to Piedmont Police Captain Chris Monahan, the hit was for a 2010 Toyota Prius. The car was pulled over and found to be a different vehicle – a 2012 Toyota Prius. Captain Monahan said the driver of the car was not a suspect. The license plate was removed from the Prius and booked into evidence.