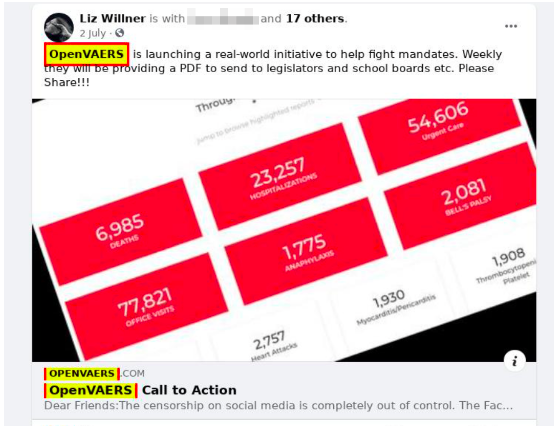 In this highly vaccinated community — over 86% fully so according to Alameda County Health Department data — one resident stands out: The online news organization VICE reported on Thursday, August 12, that Piedmont resident Liz Willner is “secretly running one of the world’s biggest anti-vax websites from her home.”

The investigative reporting article alleges that Willner runs a website that “scrapes and misrepresents data from a government-run database.” VICE says OpenVAERS was set up in early 2021 to spread vaccine misinformation and that Willner confirmed her involvement with the site to researchers who uncovered her involvement. (The research group, Logically, was founded in 2017 and uses AI technology to combat misinformation and disinformation online. An examination of how OpenVAERS spreads unverified information can be found on their website HERE.)

The OpenVAERS website that Willner told researchers she was involved with says: “OpenVAERS is a project developed by a small team of people with vaccine injuries or have children with vaccine injuries. We do not accept donations or solicit fees. There is zero monetization of this site. It is purely created in order to help others browse the VAERS records and to identify the reported signals that may otherwise get missed.”

The VICE article says that “OpenVAERS has become one of the most powerful tools in the anti-vaxxer community. For example, the site on Thursday declared that over 12,000 people had died as a result of taking a COVID-19 vaccine. While that many deaths may have been reported to VAERS, the figure is completely unverified and proves no connection between the vaccine and the subsequent fatalities.”

Word of Willner’s involvement with the site traveled quickly around town Thursday morning. Willner is a web designer who has been active in a school support group for the arts. She and her husband were one of approximately 200 parents who signed a petition last year calling on the Piedmont school system to re-open full-time for in-person learning this fall. Her Twitter account, @1pissedoffmom1, has over 4,000 followers and is dedicated to spreading anti-vaccination information. Her profile says “vaccine injury is real and more common than you have been led to believe.” In their report, Logically researchers share screenshots from her Facebook page that show her connection to the OpenVAERS site.

Update: The Exedra reached out to Willner for comment on the VICE article Thursday morning. She responded to the Exedra shortly before 1 p.m. to say that she had not yet read the VICE article, that her involvement with OpenVAERS is “not a secret”, and that “they have targeted a private citizen and we are looking into legal recourse.” (The OpenVAERS website does not list who runs the site.)

Piedmont does not have a vaccine mandate for students nor does it track who is or isn’t vaccinated. Children under 12 years old are still ineligible for vaccination. The district announced last week that it is requiring that all teachers and staff be fully vaccinated or else undergo twice weekly COVID testing. COVID cases and hospitalizations are skyrocketing in unvaccinated individuals around the country, resulting in a shortage of hospital beds.