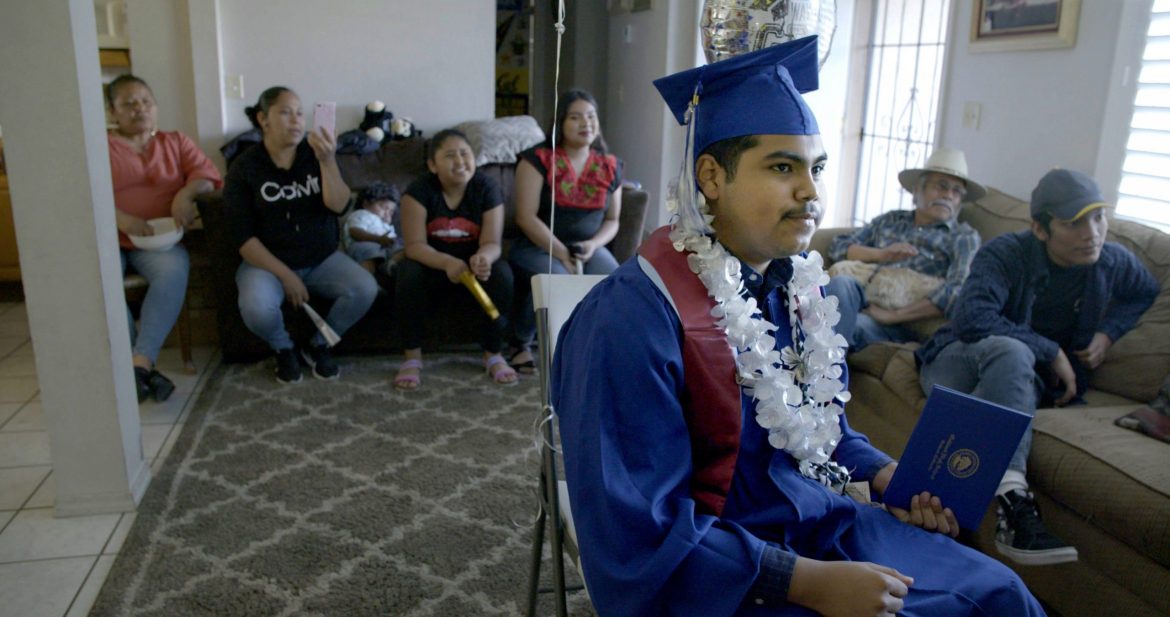 Oakland filmmaker Peter Nicks understands the ins and outs of his city’s public institutions, and he wants audiences to gain as much insight and clarity about its inner workings as he did.

From observing the overwhelmed ER at Highland Hospital in Oakland during a chaotic few hours in 2012’s “The Waiting Room” to shadowing the Oakland Police Department during a precarious time of national unrest and an internal sex scandal in 2017’s “The Force,” the award-winning Nicks’ fly-on-the-wall technique paints a multihued portrait of a vibrant but challenged city as it wrestles with crises that thrum through the nation.

With “Homeroom,” the finale in his decade-in-the-making Oakland trilogy, Nicks burrows into the public education system and discovers something that’s eluded him on previous journeys: hope.

“Homeroom” opens Thursday at the Grand Lake Theatre in Oakland and the AMC Kabuki 8 in San Francisco. It’ll also be streaming on Hulu starting Thursday, along with Nicks’ previous award winners, “The Waiting Room” and “The Force.”

This week’s Pass the Remote looks at this important trilogy and also catches up with Nicks just prior to “Homeroom’s” January world premiere at Sundance. “Homeroom” is executive produced by Oakland native Ryan Coogler, director of “Black Panther” and “Fruitvale Station” — a film that Nicks also worked on.

For the UC Berkeley journalism graduate, finding that hope in “Homeroom” came about at one of the most devastating periods in his family’s life. Just as his supportive crew began shooting “Homeroom,” which chronicles the 2020 graduating class of Oakland High School through one unprecedented senior year, Nicks’ 16-year-old daughter Karina died suddenly.

Speaking back in January, Nicks shared how Karina’s spirit was a guiding presence throughout the production; so much so that Nicks dedicated “Homeroom” to her.

The tragic loss of his daughter cemented Nicks’ resolve to candidly depict the emotional lives of high school students. “Homeroom” does that and more as it focuses on about a half-dozen students as they deal with uncertain times and challenge the presence of Oakland police within their school as well as rally in support of racial justice and then watch as their dreams of an in-person graduation get dashed due to the pandemic.

Although its focus is on teens, “Homeroom” taps into the careening mood of a nation that’s been in a perpetual emotional hurricane this last year.

“We’ve all lost something in this last year, sometimes profoundly,” Nicks says. “And I think the kids in our movie lost something — like their dreams when they were in kindergarten (about) going to prom and graduating (in person). What they found out of that loss is really powerful.”

Nicks realizes that “Homeroom” is his most optimistic film, leaving audiences with an impression that the nation will be in capable hands, as long as we listen and give them support.

Reflecting on his Oakland cycle, Nicks admits he “always wanted each film to be its own” but that there was a larger arc in the trilogy — a message that we need to support our public institutions. Each film is different, though.

“‘The Waiting Room’ is dark; there are some difficult truths you have to sit with,” he says. “‘The Force’ is the same. This film, I think more than any other, gives us something to be hopeful about, and that’s very powerful.”

He also calls “Homeroom” his most Oakland story yet, with the city being a character in the film.

And while Nicks’ vision did touch on universal themes, he took the role of reporter and let the stories guide him.

“Just allowing what these stories need to be and that process of discovery is quite remarkable when I step back and look at it, from an objective point of view,” Nicks says.

Often the films took his team to unexpected destinations. “The Force” proved to be one wild ride, originally intended to chronicle the lives of Oakland cops but then getting thrust into the 2014 unrest with protests erupting throughout cities in the aftermath of reports of police abuse. Then after filming wrapped, a sex scandal involving an underage sex worker and Oakland officers came to light.

For “Homeroom,” the specter of COVID-19 didn’t appear until halfway through the school year.

“These kids do a lot of code-switching between their forward-facing selves as leaders and activists and social-media personalities but also — at their core — they are still kids,” Nicks says. “They are still trying to come of age. They’re still learning. They’re still so very young.

“And we wanted to try to capture that. To remind people that they aren’t only powerful and inspiring, which is clear, but they need support.”

While “Homeroom” concludes Nicks’ Oakland trilogy, he’s busy on the next step in his career. He will be spearheading the nonfiction leg of Proximity Media. It’s a new company founded by Coogler, Zinzi Coogler, Sev Ohanian, Ludwig Goransson, Archie Davis, and Nicks. Nicks is slated to direct the company’s first full-length documentary, featuring composer Kris Bowers.

Nicks and Coogler are also set to produce, with Nicks directing, a documentary for A24 about Golden State Warriors’ star player Stephen Curry. It will hone in on Curry’s college days and his emergence as a phenomenal athlete.

Here are brief rundowns of the three films in Nicks’ Oakland cycle, all available on Hulu.

“The Waiting Room”: Lives literally hang in the balance in Nicks’ eye-opening 2012 documentary, which puts a much-needed human face to the health-care crisis. Nicks’ taut feature, which took home an Independent Spirit Award and landed on the Academy Awards short list, introduces us to a stretched-to-the-limit staff along with a diversity of stressed-out patients needing care. From a teen gunshot victim to a father worried about his daughter, “The Waiting Room” captures the chaos of care in this wounded age. It also introduces us to Cynthia Y. Johnson, a nurse’s assistant you will never forget and want to meet the next time you ever need to visit the hospital.

“The Force”: Nicks’ initial intention to tag along with Oakland Police Department officers splinters off into a more expansive direction as Oakland becomes a hotbed for protests over police abuse reports and a growing Black Lives Matter movement. Nicks’ feature earned him the 2017 Sundance Director Prize and justly so, since a series of shocking breaking-news events forced him to be nimble and change the scope and scale of this piercing insider look into the 2014-2016 period of OPD. It’s illuminating, disheartening and riveting throughout.

“Homeroom”: Editors Kristina Motwani and Rebecca Adorno received a Sundance Award for their fleet editing in this compelling final film in Nicks’ trilogy. It’s a fitting finale, given that it not only offers a sense of hope but also draws in elements of its previous films: police and the health-care crisis. “Homeroom” conveys the spirit of Oakland and the courageous young adults who are willing to put themselves out there to enact change. “Homeroom” encapsulates a strange year, but it’s also a testament to these teens.