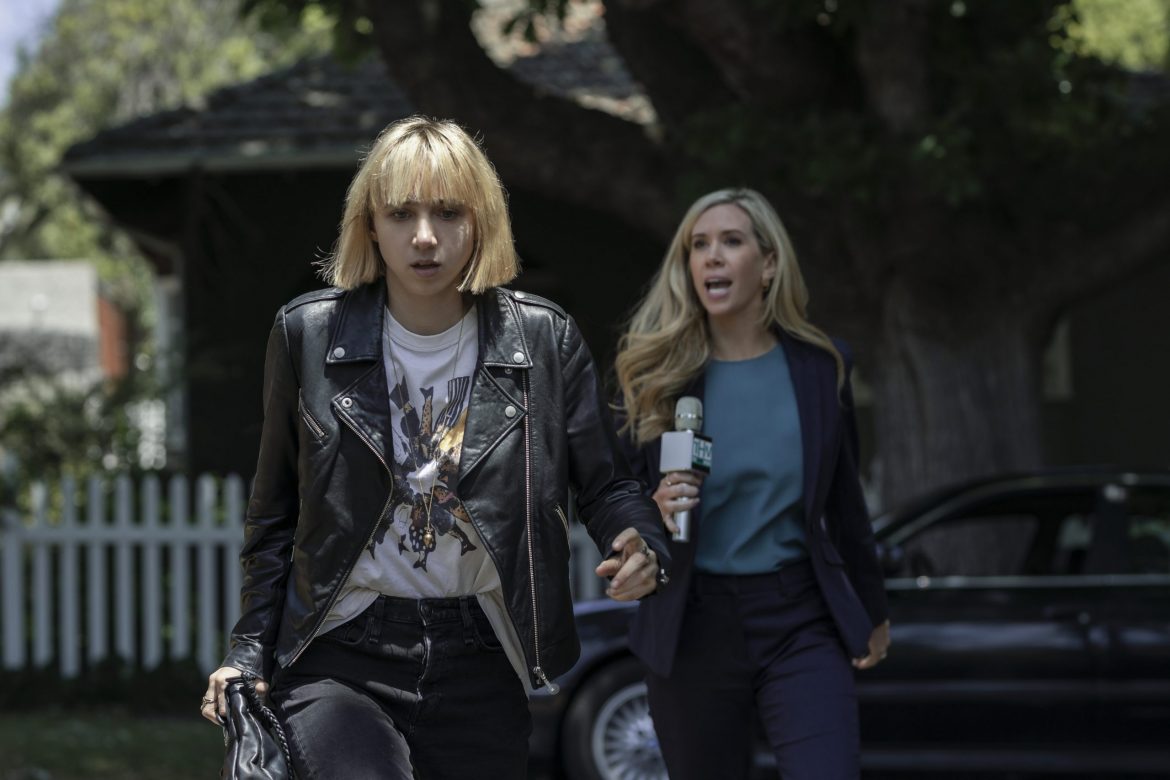 Pia Brewer (Zoe Kazan) wants to get to the root of the dirty secrets about her brother in "Clickbait," an eight-episode limited series set in Oakland. (Photo courtesy Netflix)

Whether you prefer cozying up on the couch, kicking back in a lawn chair or simply lounging about in a theater, Pass the Remote has the situation — and film — to match your particular movie-watching experience.

High on the list of recommendations this week are a compulsively watchable Netflix series that was shot partially in Oakland and a riveting character study on a tennis pro in his mid-30s trying to make a comeback. Both make for perfect cozy-on-the-couch watches. Read on.

Better clear those evenings schedules before diving into your latest binge addiction, Netflix’s Oakland-set standalone series “Clickbait.” It’s a gripping eight-parter with one gasp-inducing cliffhanger after another that also includes numerous (often striking) shots of the East Bay.

The attention-grabbing premise seems sprung from a propulsively readable thriller. Respected Oakland physical therapist Nick Brewer (Adrian Grenier of the HBO series “Entourage”) becomes the unlucky star of a viral sensation in which he appears on video looking haggard, bloodied and beaten, and adorned with a placard that accuses him of abusing and preying on women.

His well-to-do family — teen sons Ethan (Camaron Engels) and Kai (Jaylin Fletcher) and wife Sophie (Betty Gabriel, in a sensational performance), a popular teacher — are agasp about the vid and about Nick’s secret life. Ditto his argumentative sister Pia (Zoe Kazan) and other family and friends. But Pia is skeptical and takes the lead in snooping about for the truth as everyone races to save Nick, targeted to die by his kidnapper or kidnappers once the video reaches 5 million views.

It’s easy to get hooked and winnow out the suspects. With “Clickbait’s” structure — each episode gets told from another perspective, i.e., the dreamy Oakland detective (Phoenix Raei), the ambitious and callous gay internet journalist (Abraham Lim), Nick’s wife and so on — the clues and surprises just keep piling up and culminate in a knockout ending that is as satisfying as it is shocking. (Available to stream on Netflix starting Wednesday)

The California fire season continues its reign of terror, destroying and threatening homes and lives, turning swaths of air dangerous and straining overburdened firefighters. Lucy Walker’s documentary “Bring Your Own Brigade” covers the valiant, courageous efforts of firefighters, searches for insight on why this is happening and pinpoints measures that can be taken to avert more devastation. (Streaming now on CBSN and Paramount+)

If you prefer watching a movie bundled up outside, the Berkeley Art Museum and Pacific Film Archive has a warm-blanket experience waiting for you. Its free outdoor series continues with Lisa Rovner’s winning documentary “Sisters With Transistors,” a hit on the festival circuit. It focuses on nine female composers — including Berkeley’s Suzanne Ciani — and looks at their careers and their trailblazing work and ways. It screens at 7 p.m. Thursday. It screens at 7 p.m. Thursday.

The series concludes at 7 p.m. Sept. 9 with a screening of the galvanizing Oscar-nominated “Crip Camp: A Disability Revolution” from Oakland filmmakers James LeBrecht and Nicole Newnham. It was one of 2020’s best documentaries and revisits a rowdy ’70s summer camp for disabled youths and how it played an integral part in the formation of a civil rights movement. All screenings take place in front of  BAMPFA’s outdoor LED screen, located on Addison Street in Berkeley.

Sports dramas tend to follow an inspirational pattern with an underdog achieving numerous goals. “Final Set” from writer/director Quentin Reynaud marches to a different beat, focused on a 30-something French tennis prodigy who goes on a winning streak as his injured body takes a lashing. As the obsessed tennis wunderkind who failed to live up to his hype, Alex Lutz aces every scene as the impossibly driven Thomas, playing his part both on and off the court with skill and awareness of his character’s psychology. Lending strong support are Kristin Scott Thomas as Thomas’ drill-sergeant-like mom and Ana Girardot as his wife, an accomplished athlete who tabled her own tennis dreams. Everything about “Final Set” feels like the real deal, from the closet full of tennis rackets to the intense tennis match making up its final minutes. It deserves much more fanfare than it’s received. (Starts streaming Friday at https://rafaelfilm.cafilm.org/final-set/)

Documentaries on individuals who face adversity but are willing to stand up for their beliefs in order to make the world a better place always get to me. The Duplass Brothers-produced “Not Going Quietly” certainly did. It tells the story of Ady Barkan, an activist and attorney who found out at age 32 that he has ALS. That diagnosis only heightens his resolve to fight for better health-care representation, a cause that creates a “Be a Hero” movement. Nicholas Bruckman’s documentary achieves one of its goals incredibly well, motivating us to get involved and make a difference. (Available Friday to stream at https://rafaelfilm.cafilm.org/not-going-quietly/)