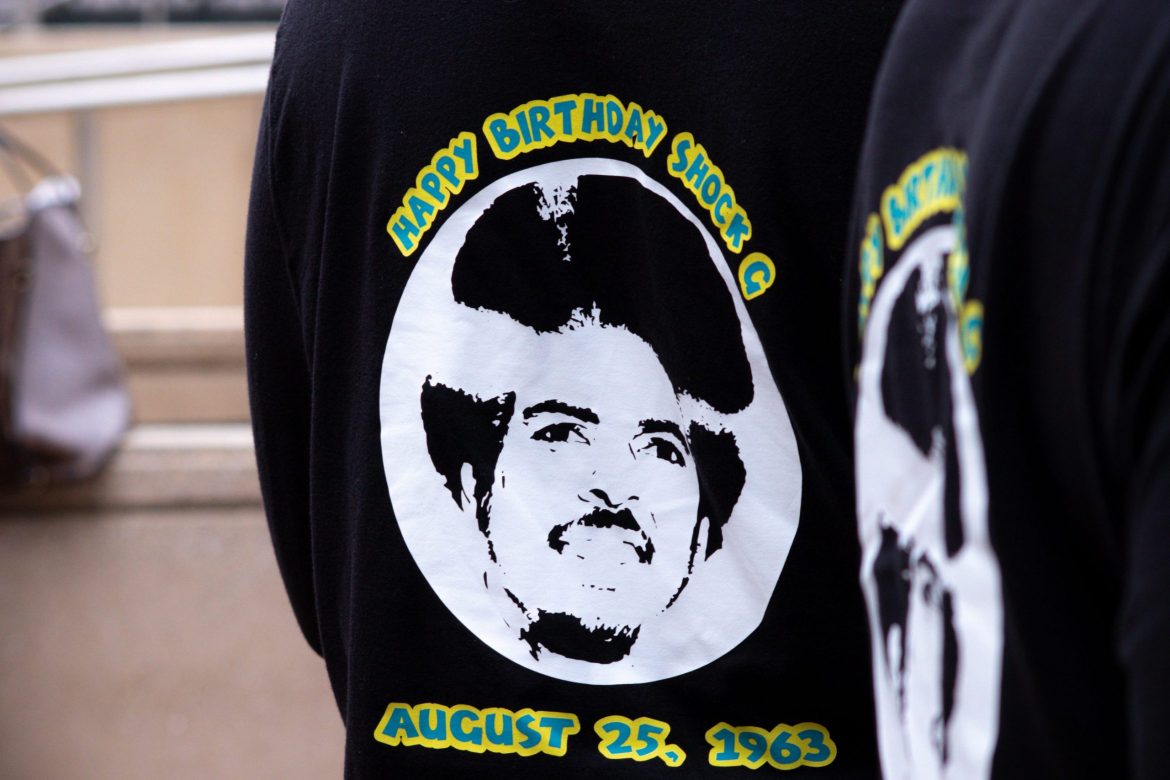 ‘Cause I’m about to ruin

The image and the style that ya used to”

Make a reference to the lyrics of the 1990 Digital Underground hit “The Humpty Dance” and throw in a description of the white fur hat, black-framed glasses and plastic nose of the rapper Humpty Hump in the music video, and most people will respond with “Oh yeah. I know who that is.”

Mention that Humpty Hump was an alter ego of Shock G, though, and some will scratch their heads in confusion.

As Young Hump, Shock G’s protégé and current member of Digital Underground explained, “People know Shock was great, but they don’t know how great he was.”

Shock G, who was born Gregory Edward Jacobs and died at age 57 on April 22 of this year, wore many hats besides the one on his head: He was a founding and consistent member of the popular hip-hop group Digital Underground, a songwriter, a visual artist, a performer, a pianist, a music producer and a mentor to other hip-hop artists.

On Saturday, people gathered in downtown Oakland at The Bay Area Honors Shock G, a part of the month-long Black Arts Movement Business District Fest, to honor this unique rapper, whose career spanned more than 30 years, many of which were spent in the Town.

The free-to-the-public event included a motorcade that made its way through Oakland to City Hall and a stage-based tribute at Frank H. Ogawa Plaza, featuring Shock G’s siblings Kent Craig and Elizabeth Racker, Oakland city officials, Oakland-based speakers and artists as well as performances from musicians such as from Carla “CMG” Green of the Conscious Daughters, Luniz with Dru Down and Richie Rich, and Digital Underground — featuring members Young Hump, Money-B, DJ Fuze, Cleetis “Clee” Mack, Mystic, Esinchill and Ramone “Pee Wee” Gooden, as well as rapper Ras Kass and keyboardist Kev Choice.

Longtime Shock G and Digital Underground fan Cia Vasquez, from San Bernardino, made sure she had the day off from work when she saw the announcement about the Saturday event.

“I wanted to be here to celebrate his life,” she said. “I was so sad when he passed. He was just a great musician all around, with so many personalities.”

Just as he had numerous roles and talents, Shock G also had a variety of identities: He was also Gregory Edward Racker, Piano Man, Rackadelic, MC Blowfish, Icey Mike, Peanut Hakeem and, of course, Humpty Hump.

In an interview, Vasquez referred to a 1990 Digital Underground concert with Queen Latifah that she attended when she was 16. It was held at San Bernardino’s National Orange Show Event Center.

“I remember when my dad got me the tickets, he was like, ‘Do you really want to go see this guy who wears a nose? They’re two people,’” she said. “But I already knew what it was. It was one person, and he had many other alter egos.”

Young Hump, who played Shock G in the Tupac Shakur biopic “All Eyez on Me” and bears resemblance to Shock G both in his cap, glasses-and-nose masquerade and in his style of rapping, referred to Shock G as a real mastermind who was able to orchestrate his multiple personas for decades, often without people knowing whether they were really talking to Shock G or to his brother Kent, who would sometimes stand in for him at events and during interactions.

“It was like a magic trick he played on people for so long,” Young Hump said. “The stories are legendary, like rappers and artists like Ice-T, when they first walked up and looked at him like ‘Huh?’ And that’s not an easy thing to do. In fact, I challenge everybody to find someone who had a gag going on for as long as Shock did.”

Shock G’s alter egos went beyond being inventive and artistic expressions — characters like Humpty Hump and the music Shock G and Digital Underground created inspired a light-heartedness in those watching and listening. As Vasquez shared, “The music always brought me so much joy.”

During Saturday’s event, Dave “Davey D” Cook, an Oakland hip-hop historian and founder of Hard Knock Radio, talked about Shock G’s positive influence on the Oakland community. Davey D said, “Shock was a breath of fresh air when he came to the Town. He put out a whole different vibe. He tapped into a funk energy that had long existed here, and brought it to the next level. And more importantly, he reminded us it was OK to have fun … to smile … to be yourself and to treat each other with kindness and generosity.”

The event closed with a performance from Digital Underground, who befittingly went with “The Humpty Dance” as the final song in their set. As Young Hump recited the lyrics, “This is my dance, y’all. Humpty Hump’s my name. No two people will do it the same,” the crowd’s jubilation was palpable.

Dancing, smiles, moments of reflection and gratitude and coming together as a community — it was a true celebration of Shock G’s life, and of life in general.