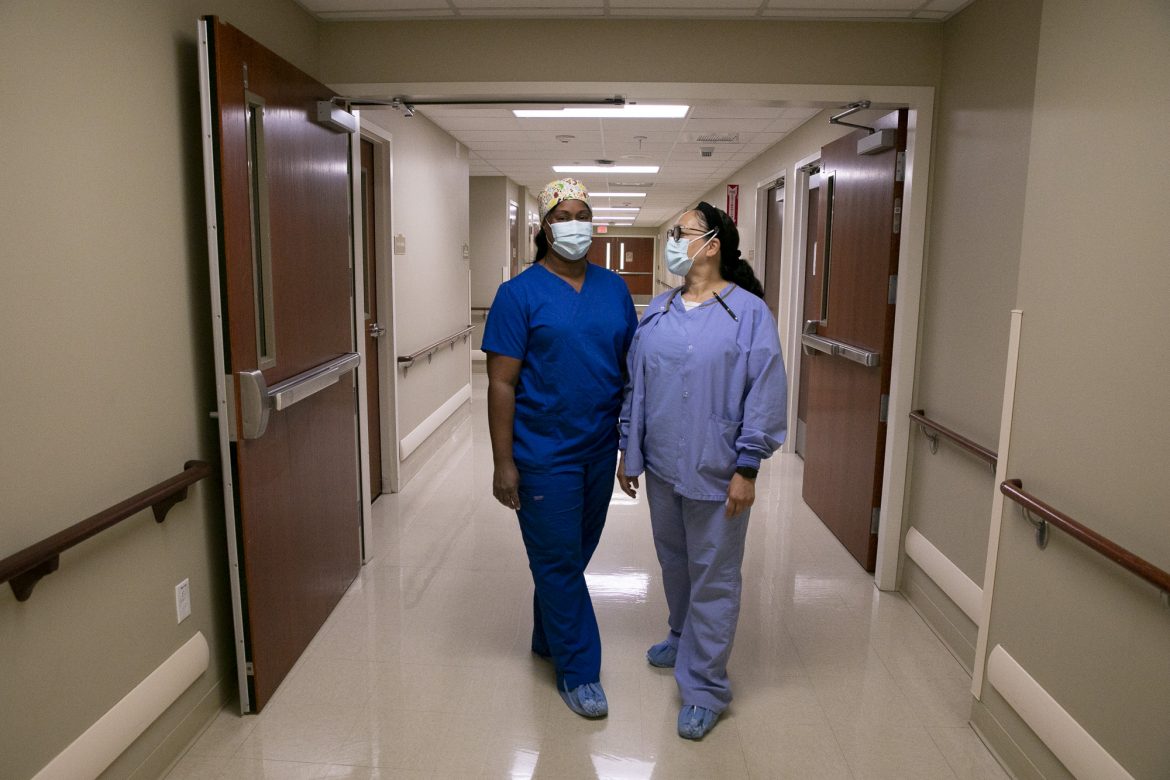 Traveling nurses Candace Brim, left, and Janet Stovall, right, are based in North Carolina but have been traveling as a pair since the beginning of this year. Photo by Anne Wernikoff, CalMatters

In the past month, four emergency room nurses — exhausted by the onslaught of patients and emotional turmoil wrought by COVID-19 — have quit at the Eureka hospital where Matt Miele works.

Miele, who has been a trauma nurse for four years, is actively looking for a less stressful nursing position and has colleagues who are, too.

Around California — and the nation —  nurses are trading in high-pressure jobs for a career change, early retirement or less demanding assignments, leading to staffing shortages in many hospitals.

Hospitals are struggling to comply with the state’s nurse staffing requirements as pandemic-induced burnout has exacerbated an already chronic nursing shortage nationwide.

But burnout isn’t the only thing compounding California’s nursing shortage: The state’s new vaccine mandate for health care workers is already causing headaches for understaffed hospitals before it is even implemented. Some traveling nurses — who are in high demand nationwide — are turning down California assignments because they don’t want to get vaccinated.

Hospitals say they are reaching a crisis point, straining under the dual forces of more people seeking routine care and surging COVID-19 hospitalizations driven by the Delta variant.

“Oftentimes at hospitals there are long waits and long delays,” said Dr. Tom Sugarman, an emergency physician in the East Bay and senior director of government affairs at Vituity, a physicians’ group. “There’s not enough staff to keep beds open, and patients can languish waiting.”

In March 2020, the California Department of Public Health contracted with Aya Health — one of the nation’s largest traveling nurse providers — to pay up to $1 billion over six months to help hospitals meet nursing and other clinical staff shortages.

Department officials did not respond to multiple requests about the number of hospitals now seeking emergency staffing, and would not release the updated contract.

Before the pandemic, nursing shortages were common in most areas of the state, according to the Office of Statewide Health Planning and Development.

Now the pandemic has stretched resources to a breaking point.

Hospitals, some with more COVID-19 patients now than during the winter surge, say they are confronting unprecedented staffing shortages, particularly among nurses.

“All of our hospitals are saying staffing is a big problem,” said Lois Richardson, attorney for the California Hospital Association. “We have fewer personnel than at the beginning of the pandemic and more patients.”

The staffing shortage is so severe that Scripps Health is considering temporarily consolidating some of its outpatient centers. Scripps, which has five hospitals and 28 outpatient clinics in the San Diego area, told CalMatters that it is serving nearly 20% more patients on average than before the pandemic. At the same time, job openings at the hospitals have increased 57% since August 2019. For nursing jobs alone, vacancies have increased 96%.

“We’ve had some staff leave the organization or leave the industry as a whole because they’re burned out,” said Eric Cole, corporate senior vice president of human resources for Scripps. “They’ll wake up in the morning and call off the shift. They’ve done as much as they can do.”

Emotional and physical exhaustion is the primary reason nurses are fleeing the bedside, experts say. It has been a long and brutal 18 months.

“We thought the pandemic would be over soon and could take time later to deal with our emotions,” said Zenei Triunfo-Cortez, president of National Nurses United, the largest nursing union in the country, which has more than 100,000 members in its California association. “Then the second surge hit, and the third and now it’s the fourth.”

Mary Lynn Briggs, an ICU nurse in Bakersfield, said of the dozens of COVID-19 patients she has treated since the pandemic began, only three have survived.

“Some days coming home from the hospital I yell at God, I yell at myself, I yell at COVID and cry. And that’s all before I pull into my driveway,” Briggs said.

Her workplace has lost more staff than they can hire, and that means the ones who are left have to pick up the slack.

“There have been multiple nights where I swear I am tired and I need a night off, and then I get a call from somebody saying we’re going to give the nurse three patients, so I go in because I don’t want anyone to work out of ratio,” Briggs said.

“Out of ratio” means that a nurse is assigned too many patients. California is the only state that caps the number of patients that can be assigned to a single nurse. Under state requirements, for instance, an ICU nurse can have no more than two patients and an emergency room nurse, no more than four.

In December, during the winter surge, emergency waivers for the ratios were granted to hospitals throughout the state, allowing ICU nurses to see three patients, for instance. Critics say the conditions threatened patient safety.

Newsom’s order last week did not reinstate the waivers of the nurse-patient ratios, which expired on Feb. 8. Individual facilities, however, can still apply for them.

“I would not be surprised if they reapply for waivers,” union president Triunfo-Cortez said.

The state health department did not respond to requests seeking information on whether hospitals have applied for staffing waivers in response to the shortages.

Hospital administrators worry that the state’s vaccine mandate for health care workers, which goes into effect Sept. 30, could drive some of their workers out. Already, some report resistance among employees.

“One hospital told us they had 474 unvaccinated employees. They did a big education and incentive push. Only 12 people signed up,” said Richardson, the hospital association’s attorney.

Administrators are particularly concerned about low vaccination rates among support staff like janitors and food service workers. However, some nurses also are wary of the COVID-19 vaccine. Some nurses with large social media followings have participated in protests in Southern California, arguing that the mandates violate their personal freedom.

The vaccine order allows only for narrow religious and medical exemptions. Until Sept. 30, unvaccinated workers must undergo weekly COVID-19 testing. The state nursing association issued a statement saying “all eligible people should be vaccinated.”

While California was first in the nation to impose a vaccine mandate for health care workers, other states have since joined in, but their mandates aren’t as broad.

“If they don’t want to get vaccinated, they are turning down California assignments,” he said.

To contend with local shortages, hospitals are increasingly turning to hiring temporary, traveling nurses from around the country.

During the past 18 months, Janet Stovall, a traveling ICU nurse for more than 20 years, has worked in hospitals in the Imperial Valley town of Brawley, Visalia, Wichita, Kan., and now Folsom and Alameda  — and all of them have been running on “very lean staffing.”

“Last night there were ambulances waiting just to get into the ER to be evaluated… They pulled a nurse from the ICU to help with the ER, and we worked without a charge nurse or a break nurse,” Stovall said.

Stovall said traveling nurses like her are in high demand. At one hospital, “we hadn’t even finished orientation when the VP of patient services called and said ‘You need to leave right now, test out of orientation, and be at work by 11 p.m.,’” Stovall said. “That’s how desperate they are.”

Sophia Morris, vice president of account management at Aya Healthcare, said California has the second highest number of positions posted for nurses, exceeded only by Texas.

Nationwide more than 52,000 temporary health care jobs are posted, and Aya is only able to fill about 3,000 per week, she said.

“In the 16 years I’ve been in this space, I have never seen this high a need,” Morris said.

That need is creating intense competition for a limited pool of nurses nationwide.

“Nurses are getting paid premiums to work in Texas and Florida where it’s surging right now,” Sugarman said. “Those nurses have to come from somewhere, and I wouldn’t be surprised if some are coming from California.”

Hospitals have been paying twice as much as pre-pandemic times for travelers, Morris said.

To entice nurses to come to California, the state Department of Public Health agreed to pay up to $145 per hour for Aya Health’s ICU nurses and more if a facility had a “critical need.” Stovall, who works for Aya, said between October and December 2020, she was paid $10,000 per week with an additional $2,000 if she picked up an extra shift.

It’s working — but not without consequences.

The money is pulling full-time staff nurses into traveling positions, further aggravating the staffing shortage nationwide. Stovall, who is based in North Carolina, said her sister-in-law took a week’s vacation from a full-time nursing gig to pick up an $8,000 traveling contract. She also convinced a longtime friend, Candace Brim, to leave her staff position and travel during the height of the pandemic in December.

“Everywhere we go people ask, ‘Can we get your recruiter’s number?’ We’ve given it out 20 times,’” she said.

Traveling has been key to helping them avoid burnout, Brim and Stovall said. It’s rewarding to be able to come in and “save the situation” at hospitals in dire need of extra hands, Brim said, and the money is good enough that they can afford to take weeks off at a time after difficult assignments. Their contracts in Folsom and Alameda last until Thanksgiving.

“By the time we finish our contract in November, we will have enough money to sit home the rest of November and December all through the holidays,” Stovall said.

Time off has helped them cope with the somber realities of treating COVID-19 patients in the ICU: In the past seven months, every COVID patient Brim and Stovall treated has died.

“We took care of about 65 COVID patients in Brawley and not a single one made it,” Stovall said. “We coded one every night.”

Will so many nurses burn out and leave the profession that California will face long-term shortages? It’s possible. Pre-pandemic, one projection said California will be short more than 44,000 nurses by 2030, while other studies suggested that there will be an adequate supply of new graduates.

In Humboldt County, all floors are at full capacity at the hospital where ER nurse Miele works. Humboldt is one of the areas experiencing record-setting COVID-19 hospitalizations.

Miele has had patients who waited 10 to 12 hours in the emergency room. Sometimes, the patients he checks on at 9:30 p.m. before he leaves are still in the waiting room the next morning when he returns to work.

“To me it seems like the lowest staffing levels that I’ve seen at the time we need it the most,” he said, adding that he frequently works at a patient-to-emergency-room-nurse ratio that exceeds the four-to-one required by the state.

People are triaged in the waiting room “like a mass casualty patient event,” getting their initial assessments and tests ordered before ever seeing the inside of an examination room. He said he worries because staff are unable to routinely monitor the patients in the waiting rooms.

His hospital hasn’t yet rationed care by prioritizing who gets treated based on who is most likely to survive, but it is being discussed, Miele said.

“Stress is part of the game when you sign up to be an emergency medicine RN,” he said, “but this is another level.”