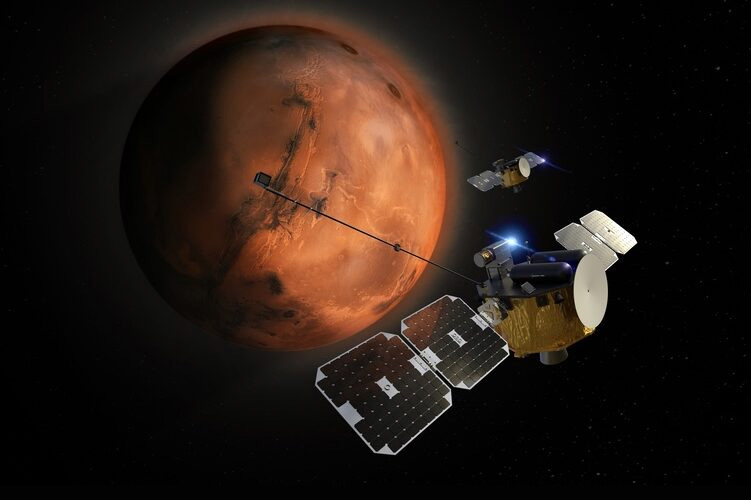 The ESCAPADE Mars mission will consist of two identical satellites — “Blue” and “Gold” — that will study how the planet’s ionosphere and magnetic field interact. (Image courtesy of Rocket Lab and UC Berkeley Media)

NASA has greenlighted a mission by University of California at Berkeley to put two satellites into orbit around Mars, university officials said Monday.

Dubbed ESCAPADE — Escape and Plasma Acceleration and Dynamics Explorers — the mission would launch in October 2024 and be in orbit in 2026.

The project is an effort by scientists at UC Berkeley’s Space Sciences Laboratory to show that relatively inexpensive spacecraft can be assembled in a short period of time to explore other planets.

Officials said the target cost is $80 million, far less than the typical NASA planetary missions that often require more than a decade of preparation and can exceed $1 billion in costs.

“ESCAPADE and two other NASA missions recently approved are experiments to see whether advances in the space industry over the last five to 10 years can translate to a much better bang for the buck in terms of science per dollar,” said mission leader Robert Lillis, the lab’s associate director for planetary science and astrobiology.

“Sending two spacecraft to Mars for the total cost of under $80 million is just unheard of, but current NASA leadership is taking the risk.”

The UC Berkeley team will work with Rocket Lab, a space contractor based in Long Beach that will supply two Photon spacecraft to house and support the instruments.

The mission’s goal is to collect data that could help reconstruct the climate history of Mars and determine how and when it lost its atmosphere, which was once dense enough to allow for running water, including rivers, lakes and possibly oceans.