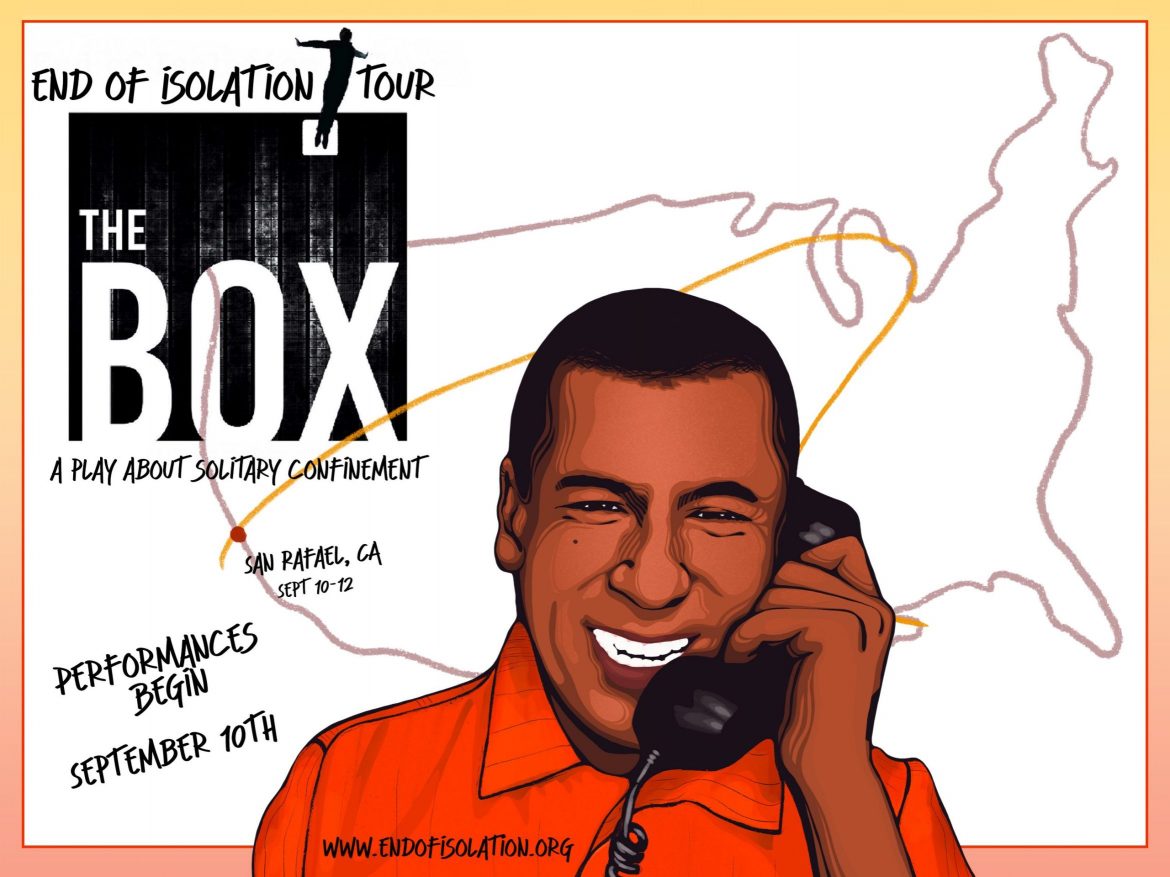 Sarah Shourd's play about solitary confinement, "The Box," has been reworked so each audience member is also in a "box." The show, as seen in this graphic by Kate DeCiccio, will be presented in San Rafael the weekends of Sept. 10-12 and Sept. 17-19. (Image courtesy Kate DeCiccio)

It’s understood that a journalist will research their topics thoroughly. Yet, most journalists are never as intimately acquainted with their subjects as Sarah Shourd is with the topic of imprisonment. In 2009, she was falsely imprisoned in Iran’s infamous Evin Prison on suspicion of espionage. Since her release in 2010, her journalism has reflected her tireless advocacy for prison reform and the rights of prisoners.

In 2016, she ventured into playwriting with “The Box,” which premiered at Z Space in San Francisco. The critically acclaimed play is based on Shourd’s three-year investigation into the effects of solitary confinement on U.S. prisoners. (During her 10-month Iran imprisonment, she was placed in solitary.) It features a set of six transparent boxes in which prisoners act out the psychological toll taken on them as all of their actions are limited to a claustrophobic amount of space.

In June, the Pulitzer Center (of which Shourd is a grantee) launched its “End of Isolation Tour,” a pandemic-inspired nationwide tour highlighting the damaging repercussions of solitary confinement and the American prison industrial complex.

A newly worked version of “The Box” is the centerpiece of the entire tour, one more immersive than its previous incarnation.

“Each audience member will sit in their own square of an immersive grid on an outdoor stage in safe proximity to the performers,” official press materials explain. “The playwright Sarah Shourd, a survivor, will perform along with a powerful cast, more than half of whom are formerly incarcerated. A healing circle follows each performance to imagine ways to repair harm and create safety.”

Unfortunately, the “tour” element of the project is the one aspect that’s had to be removed. Originally planned to run through autumn, the project has now canceled all of its non-California/post-September dates due to growing concerns around the delta variant of COVID-19.

However, the project is moving ahead with its planned September performance of “The Box” at Marin Shakespeare Company’s outdoor amphitheater in San Rafael. The project is partnering with local groups and prison reform advocates in the hopes of reaching a wider audience for the play.

“The Box” plays two weekends – from Sept. 10-19 – at Marin Shakespeare’s Forest Meadows Amphitheatre, 890 Belle Ave., San Rafael. All audience members are required to show proof of vaccination upon entry. Tickets are $40, with discounted/free options for those “formerly incarcerated [or] directly impacted by incarceration.” For tickets and more information, visit https://pulitzercenter.org/projects/end-isolation-tour.