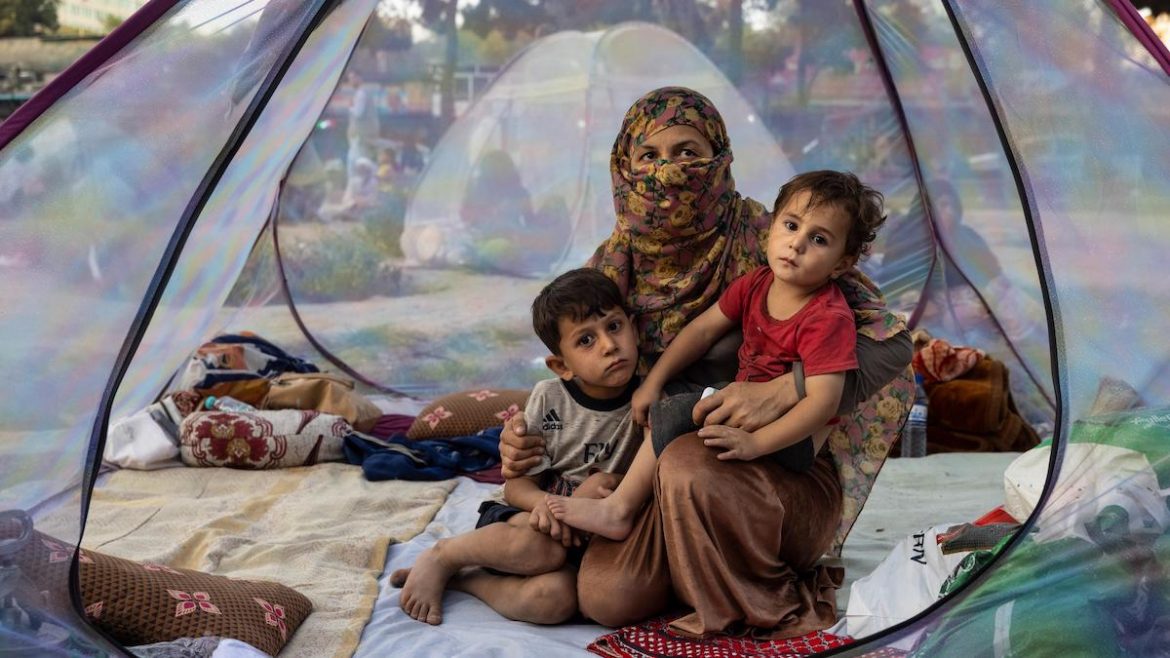 A woman, 28, who lost her husband in Baghlan one week ago to fighting sits in a tent at a makeshift IDP camp on August 12, 2021 in Kabul, Afghanistan

Community and religious groups in the East Bay and beyond are raising money and preparing to help settle a new influx of Afghan refugees in the Bay Area as the withdrawal of the U.S. mission from Afghanistan is completed. Many of the airlifted Afghan families with Special Immigrant Visa (SIV) status are scattered around the country at military bases as they await their placement. California has a long history of welcoming immigrant families — Fremont and the Sacramento area in particular are home to many Afghans.

Here are a few ways to get involved:

Piedmont High School alum Caitlin Tulloch (’05) is a development economist at the IRC who works out of their Oakland office. “Our moral obligation to the Afghan people does not end now,” she said, reflecting on the end of the U.S. mission there. “Official government support [for refugees] is limited in scope,” she said. “Sustained involvement is key” to helping refugee families successfully integrate into the cities and towns in which they are placed. Donating to organizations like IRC is a way to support this effort, as is volunteering through community-based organizations.

It’s also important, Tulloch said, to not give up on Afghanistan and the thousands of women and NGOs who remain. The IRC has around 1,700 staff still on the ground, she said. (A report on the PBS Newshour on Tuesday highlights how the UN’s World Food Programme is trying to work with the Taliban.)

According to their website, the IRC has resettled more than 16,000 Afghan SIV recipients since Congress established the program in 2006 and IRC Northern California has resettled more than 9,500 SIVs since the program was established in 2008, mostly living in the Sacramento area. “Before the end of the year, the IRC Sacramento alone anticipates the arrival more than 1,700 Afghan SIV evacuees,” according to their website.

Tulloch is happy to talk to any Piedmonters who want to learn more about IRC and the work they do. Email us at news@piedmontexedra.com if you are interested in connecting.

Two weeks ago when the mass evacuation of Afghan families began, Piedmonters Donna and Gadi Meir posted a note on NextDoor soliciting donations of household goods from the community on behalf of Jewish Family and Community Services East Bay. The response was overwhelming and according to recent posts on NextDoor, this need has been met and help in other forms is needed now.

“The flow of Afghan refugees to the East Bay continues to be somewhat unpredictable. In addition to the 43 refugees who have already arrived in August, we have now accepted the cases of 89 people who are at Fort Lee in Virginia. Some of these people are now making their way all the way here — in fact, we’re welcoming a family of seven later today. For others, we are waiting for the government to inform us of travel arrangements. No matter when they get here, we will be ready when they arrive.

All of these refugees hold Special Immigrant Visas (SIVs) because they worked with U.S. personnel in some way—often as military translators, and also as drivers or embassy workers. These Afghan nationals have been committed allies to U.S. efforts and are clear targets to the Taliban. They and their families must be brought to safety.

With the collapse of the Afghan government, many other Afghans who do not have direct ties to the U.S. government are also in danger — often because they have been public in their criticism of the Taliban. Some of these people are now applying for humanitarian parole, a status that allows them temporary entry into the United States. Parolees do not come with visas and must start their visa or asylum applications when they arrive. Additionally, unlike SIVs, parolees do not have access to public benefits, like Medi-Cal and food support.

In addition to continuing to resettle SIVs, JFCS East Bay has now agreed to accept the cases of up to 100 Afghan parolees. Because they lack access to benefits, resettling this population will require a significant commitment from our agency. And that’s where you come in.

Your financial contributions to JFCS East Bay, purchases from our wish list of household items, and responses to our call for volunteers continue to be vital to our work. This is truly a whole community effort, as we all work together to provide safety and refuge to our new Afghan neighbors.”

Volunteers are being asked to serve as housing co-signers, to donate bicycles, Target gift cards, and help coordinate other volunteers.

You can also join a Facebook group JFCS East Bay Volunteers that will be used to highlight volunteer opportunities as they come up.

In a message to Piedmont Community Church members, the church on Tuesday said its Refugee Task Force has offered its support to JFCS.

If you are involved in a refugee assistance program we should highlight, please send us a note at news@piedmontexedra.com.