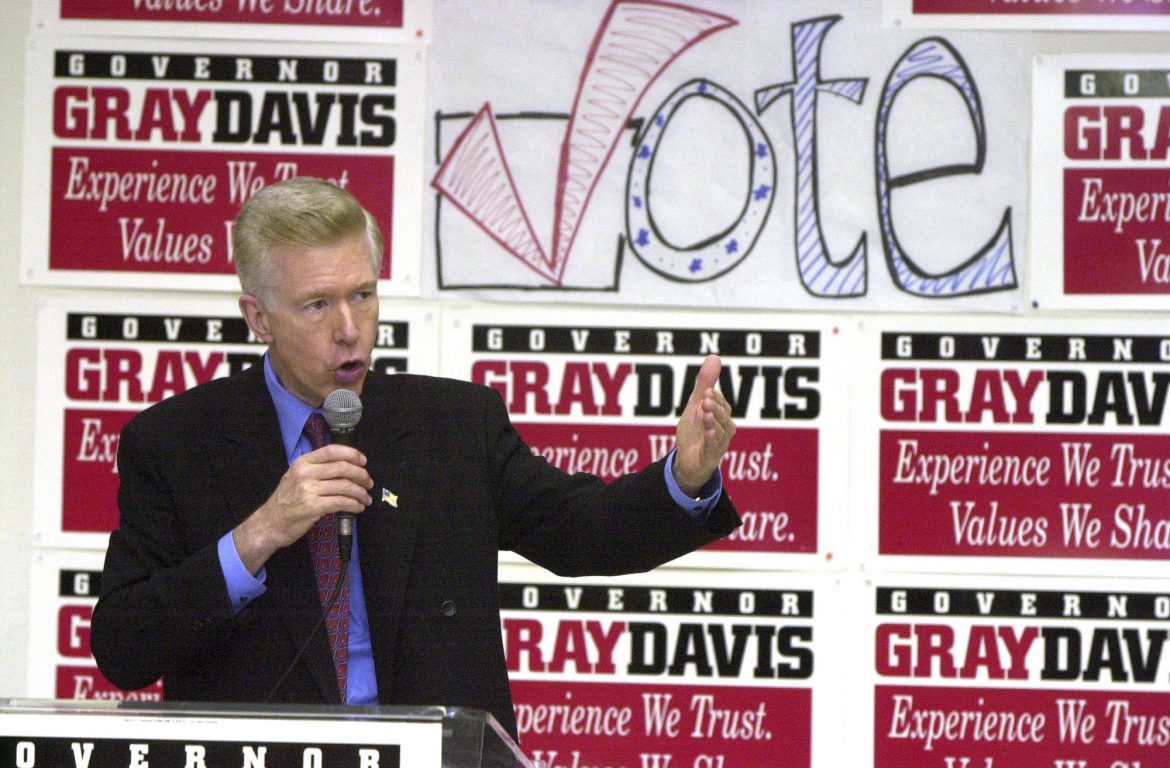 The only California governor to ever be recalled has some thoughts about how the process could be reformed.

But don’t expect Gray Davis to pity politicians facing an effort to oust them from office.

“I have no sympathy for people who are moaning and groaning now,” he added. “They don’t know their history.”

Voters were able to remove Davis from office in 2003 — and trigger a Sept. 14 election to recall Gov. Gavin Newsom — thanks to a tool of direct democracy championed by former Gov. Hiram Johnson. Determined to put power in the hands of the voters, Johnson led efforts to enshrine the recall, initiative and referendum processes in California’s constitution in 1911.

But some have labeled this tool of direct democracy undemocratic — and even unconstitutional. Thanks to California’s quirky recall rules, a governor who is recalled could be replaced by a candidate who wins far less than 50% of the vote — and who potentially has less support than the incumbent being ousted.

That’s because the recall ballot has only two questions: First, should the governor be recalled? And if so, who should replace him?

If more than 50% of Californians vote “yes” on the first question, whoever gets the most votes on the second question becomes the next governor, regardless of how few. For example, if a governor is recalled with 51% of the vote — meaning 49% want to keep him in office — he would be replaced by the top challenger, even if that person only won 30% of the vote.

That didn’t happen in 2003: 45% voted to keep Davis, while 49% chose Republican Arnold Schwarzenegger to replace him. But with recent polls showing voters closely divided on recalling Newsom and the front-runner among the 45 active replacement candidates below 20% so far, it could happen in 2021.

Secretary of State Shirley Weber — a Newsom appointee — has questioned whether it should be possible for someone to become governor without winning a majority of votes.

She also suggested that the signature threshold required to force a gubernatorial recall election might be too low.

On Thursday, state lawmakers decided the fate of two bills that could make it harder to qualify recalls, referendums and initiatives for the ballot. One that would ban the practice of paying professional signature-gatherers by the signature survived for now. But another that would require voters to read a list of the proposal’s top financial contributors before signing petitions was killed.

Meanwhile, state Sen. Ben Allen, a Santa Monica Democrat, has introduced a constitutional amendment that would allow a politician facing a recall to also run as a replacement candidate.

Of the 19 states that allow recall elections, California is among the few that prohibits officials from running to replace themselves.

Oodles of other reforms have been proposed, including requiring the lieutenant governor to serve if a recall succeeds, toughening the allowable reasons for a recall and increasing the filing requirements to run as a replacement candidate. A recent Public Policy Institute of California poll found that 66% of likely California voters say the recall process is in need of changes — but a whopping 86% say it’s a good thing the state constitution allows voters to recall elected officials, including the governor.

Many of the suggested changes would have to be approved by two-thirds of lawmakers in both houses of the state Legislature — plus a majority of voters — to go into effect. PPIC recommends that after the Sept. 14 election, legislators create a bipartisan commission to study recall reforms and then put proposals before voters in the November 2022 statewide election.

Davis also says that any changes to the recall process “ought to be a bipartisan effort.” During a nearly 45-minute conversation, we discussed how recalls affect governing, what reforms he thinks would be most effective and why he wants to see California Democrats work together with Republicans. Here are key excerpts from our conversation, lightly edited for length and clarity.

Me: “I’m wondering if, based on your experiences and what you’re seeing now, if you think the recall efforts are going to change the way governors have to govern in the respect of potentially affecting how you make decisions, the types of ways that you handle interest groups, the way you decide which bills to sign or veto.”

Davis: To “put it in terms you can definitely relate to, if your editor gave you deadlines for each story, but said, ‘By the way, as you’re working on that, we’re going to be interviewing several other candidates who may replace you in your job’ … You can understand the impact a recall can have.

(It’s) like a pop-up quiz in high school or college. It’s not scheduled, you’re not prepared for it, all of a sudden you have to stop everything else you’re doing and spend enough time so you can pass it and pass the quiz. So it’s a very disruptive factor, but it was intended to be that way.

Now, what has changed is the ease with which you can gather signatures, because obviously there was no internet, there was no email, no cell phones, I don’t even know if there were phones in 1911.

If you want to reform this so it takes into account the advances in technology, the simplest way to do this is just to have one election. Everybody plays by the same rules. The governor gets to run. Everyone else gets to run. The person with the most votes wins.”

Me: “So you would just have one question on the ballot?”

Davis: “You wouldn’t have question one anymore. It would just be a normal election. Elections are usually a contest between people. The recall — the governor’s the only one on the ballot. You’re running against yourself.

Again, I’m not complaining. If you do a Google search on me, you won’t find one statement I made during the recall of 2003 or since that moaned and groaned about the recall. It’s just a fact of life. … But if you’re a political scientist and you want to say, ‘Well, how can we make this better in the future?’ I would say, get rid of question number one on the ballot, let everyone run in question number two and make all the rules the same. … Just have one election, whoever wins gets to fill out the governor’s term.

That, I think, people would respond to because there’s still an election. They still get the payoff of getting to vote for whoever they want. But they don’t hold the governor to a higher standard than everyone else, which is what happens now.”

Me: “And in terms of the signature-gathering limits, you think those should all stay the same?”

Davis: “I’m less concerned about that. I think most people would realize that with social media and the internet it’s simply easier to get signatures, but there may be some resistance on the part of voters to say, ‘No, no, no, we don’t want to change those rules.’”

Me: “Is there a specific feeling that you think the recall brings that is different from just inherently being a politician where you have to run every couple of years anyway and you’re always facing an opponent?”

To insert a new person in here now, it’s going to take him at least two or three months … to get up to speed with all these moving parts. So I would say, obviously I’m in favor of retaining the governor, which means voting no on the recall.

He’s done a better job than most governors. … I definitely think he deserves to finish his term, and next year, anyone can run. And you’ll get to vet these people. I mean, if you ask people now, I bet more than half the people have no idea there’s an election on September 14.”

Me: “You said you were voting to keep the governor in office. Are you planning to fill out the second question?”

Davis: “It doesn’t really matter what happens on the second question if enough people vote no on the first question. So I haven’t decided what I’m going to do.”

Me: “Obviously, a lot of people have been coming to you for advice and your thoughts in this crazy year — any other things you’d like to share about that?”

Davis: “Churchill once said that America will always do the right thing after it has exhausted every other possibility, and I share that view. … And I understand that recalls should be used for … really extraordinary circumstances, rather than (becoming) almost the rule rather than the exception. … Everywhere you go, you see recall, recall, recall.”

Me: “Do you think it’s an abuse of the process in that sense?”

Davis: “I can’t say it’s an abuse of the process because it’s a tool available to people. But I do think thoughtful people — and this ought to be a bipartisan effort — thoughtful people on both sides should come together and see if there can’t be some changes that make this process, in my judgment, fair to everybody.

That doesn’t mean all the Republicans have to agree, but I think they have to be invited to the conversation, see if there are some ideas that the Democrats and Republicans can agree on. Now, if you can’t get Republicans to support it and there are enough Democrats to reach the two-thirds threshold, OK, fine. But I think you should reach out … even if you can only find three or four or five legislators that are Republicans that can support it, that’s better than having none. … I think that will increase the chances that the public will support it.”

Me: “Do you think that if Republicans had more of a role in California government that there maybe wouldn’t be as many recalls?”

Davis: “I don’t know, but that’s a very interesting question. … But I do know this. Someone once told me whoever invented the concept of a job should get a Nobel Prize, because at the end of the day, you’re too tired and all you want to do is go to bed — and the last thing you want to do is rebel against the government. But if you don’t have a job, you have all day to do nothing but rebel against the government.”

Me: “I always think about how few people have ever been in the role of the governor of California. I mean, huge state, huge economy, diverse … so many challenges. Any thoughts on what it’s like to be in that position?”

Davis: “As I say, everyone running for any office in the state is well aware of the power given to the people by Hiram Johnson in 1911. And I don’t think the public will ever give it up, nor do I think I would argue that they should give it up. That’s part of what makes California politics interesting and dynamic and somewhat unpredictable.

That being said, we still have to do the people’s business. … And there are other societal challenges that get pushed to the side, at least temporarily, while this recall issue is debated. So all I’m saying is once this election is over, I think people of good intentions in both Republican and Democrat parties ought to sit down and see if they can’t agree to reduce the questions on the ballot to just one question.”