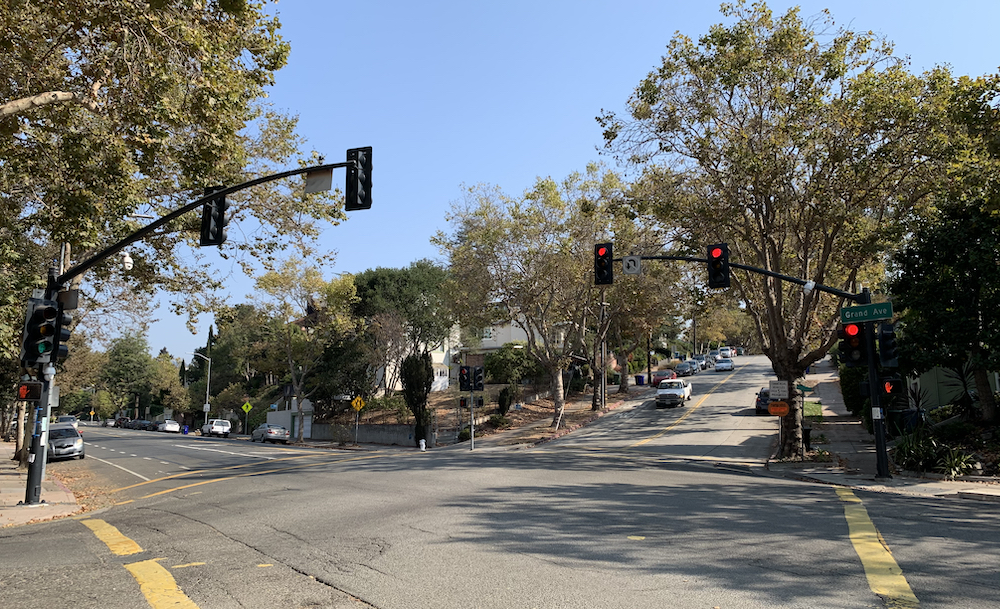 The intersection of Grand and Oakland Avenues where the city has piloted public safety cameras.

Taking what Mayor Teddy Gray King termed “a big step forward,” the City Council on Monday approved agreements to get five new local public safety cameras up and operating, and to operate them for at least five years.

The council voted 5-0 to approve two agreements — for $121,794 and $48,104, respectively –– with San Francisco-based Applied Video Solutions for purchase and installation of the equipment and first-year operating expenses, including “enhanced analytics” that speed up searches for make, model and color of vehicles whose images are captured.

Also approved by the council was an additional agreement with Comcast Business Communications, LLC to lease fiber-optic broadband and pay for additional internet service needed for the cameras and data to work. That is a five-year agreement at $41,000 per year.

The cameras will be placed at five intersections, four of them chosen months ago, which according to a city report were chosen as being along “primary routes historically taken by individuals engaged in criminal activity.” The proposed locations are Grand Avenue and Wildwood Avenue; Grand and Oakland Avenue (where trial cameras have been in place since 2012); Grand and Rose Avenue; Moraga Avenue at Highland Avenue; and Park Boulevard and St James Avenue

That latter location is instead of the originally proposed Park Boulevard and Trestle Glen Road intersection, changed to use 24-hour power availability from a nearby traffic signal light. The cameras at all five intersections will be mounted on light poles or traffic signal poles.

The public safety cameras are designed to capture images of fairly wide scenes including public sidewalks, parks, street intersections and other public places. These cameras perform a different function than the city’s “automatic license plate reader” cameras that focus on license plates to help identify vehicles connected to specific crimes. While the two camera systems have different jobs, the data and images gathered by both can sometimes be used together, Police Chief Jeremy Bowers said.

The data collected would be shared only with other law enforcement agencies to solve cases, Bowers added.

He said Monday’s votes were a long time coming, preceded not only by several discussions at the City Council and Public Safety Committee levels, but in neighborhood meetings, mostly addressing concerns about the cameras impinging on personal privacy. City Councilwoman Jen Cavenaugh asked whether local pro-diversity groups had been engaged on this subject, and expressed concerns about long-term costs associated with the camera program.

“The city and the community took its time on the technology and to vet it, and to discuss concerns folks had,” Bowers told the council. He also acknowledged Piedmont residents still have varying opinions on the public safety cameras.

Applied Video Solutions is envisioned as a long-term partner in operating the public safety cameras, including installing and configuring the needed hardware and software to run the cameras, and provide support, maintenance and help with potential expansion of the Piedmont camera system.

It was an idea that some council members, including Cavenaugh, Vice Mayor Tim Rood and Councilwoman Conna McCarthy, said could be done elsewhere in the area near the schools and the Civic Center area to add cherished (and needed) parking spaces.

“One parking space is worth a lot,” McCarthy said.

Another preparation for more housing

That update is connected to the sixth and next Regional Housing Needs Allocation cycle, covering 2023 through 2031. Piedmont is well underway with preparations for the sixth RHNA cycle, which calls for the city to prepare to accommodate 587 new residences during that time period to add to the region’s housing stock.

A key goal of this environmental review, Piedmont Director of Planning and Building Kevin Jackson said, is to make it easier for multi-family housing projects to be approved, helping the city to meet those state-mandated housing goals. The review would be a more in-depth document than the RHNA would require, and would aid in approval of projects beyond those specific to the housing update.