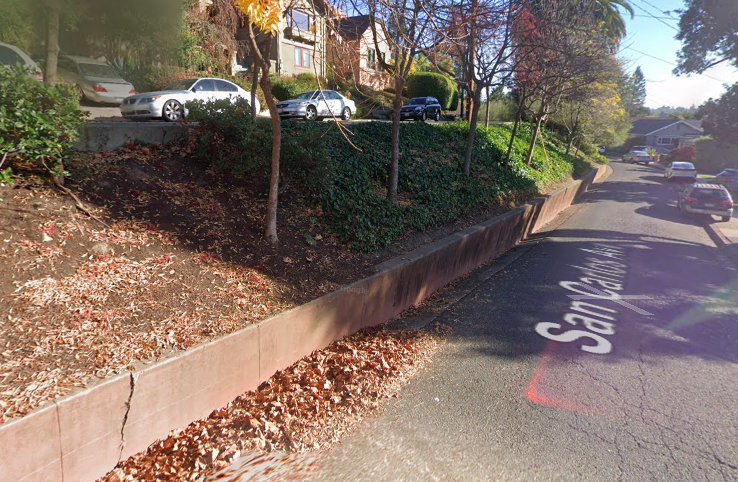 A Google Streetview image of the retaining wall that runs down San Carlos Avenue between Oakland and Magnolia Avenues.

Retaining walls along Oakland Avenue and San Carlos Avenue will get major repairs and improvements, with the City Council on Monday having approved spending $610,000 for the work on both walls.

The city approved hiring CF Contracting, Inc. of San Francisco, which submitted the lowest of six bids for the work, at $466,437. The $610,000 figure includes contingency costs, testing, and project management.

The other wall to get a major facelift is on San Carlos Avenue between Oakland and Magnolia Avenues. About 140 feet of this wall is slated for replacement; part of this wall is leaning into the roadway.

Mayor Teddy Gray King and Councilwoman Jen Cavenaugh both said they’ve heard from residents along those streets that the work is needed and welcome. But Public Works Director Daniel Gonzales said work on the San Carlos wall could mean closing that part of the street to through traffic from 8 a.m. to 5 p.m. each day for two weeks or so.

The City Council in November approved spending $387,000 on repairs to the two retaining walls. Construction bid documents were completed in June and six bids were opened on July 20; they ranged from $466,437 to $907,904 (The engineer’s original estimate for the project was $432,285).

Gonzales said the bid process came with a measure of drama. Sposeto Engineering, which submitted the second-lowest bid, protested CF Contracting’s bid claiming that firm violated the state’s Subcontractor Listing Law by failing to list a licensed land surveyor or any subcontractors. City staff asserts the Listing Law does not require listing of land surveyors, and CF Contracting, Inc. told the city it would use a licensed land surveyor and would perform the work with its own workforce.

Bay Construction, which submitted the third lowest bid among the six Piedmont received, claimed neither CF Contracting, Inc. nor Sposeto Engineering purchased a complete set of the project documents from the city’s designated vendor, under Piedmont’s bid requirements. The city determined such project documents were indeed properly purchased by CF, and the council formally rejected the bid protests on Monday night..

King said she’s never seen a bid protest in her seven years on the council, and sought assurances there was nothing improper with the CF Contracting bid. City Attorney David Rosenthal provided that assurance, calling the bid issues an “inconsequential deviation.”

These basic terms are very similar to agreements with Piedmont’s police officers and other firefighters approved in July. Both of those four-year contract agreements called for 3 percent raises immediately and in July 2022, and 3.25 percent increases effective in July 2023 and July 2024.