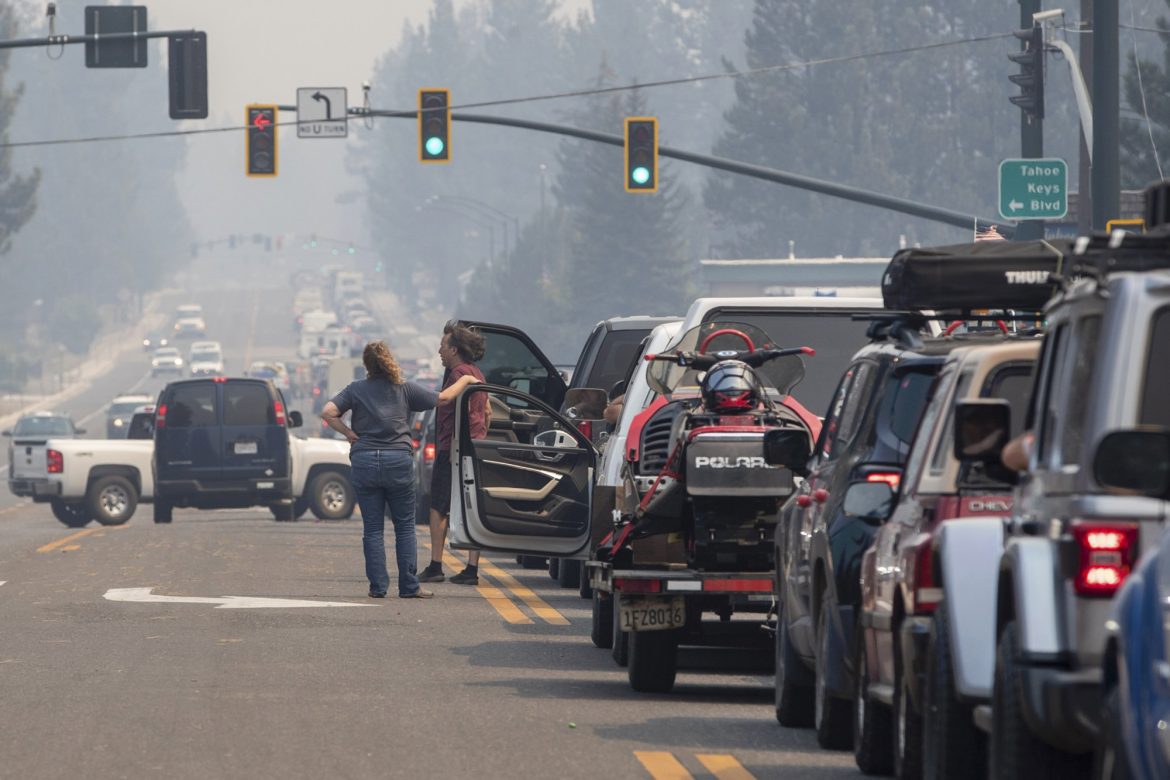 Let's avoid this: Gridlock on Highway 50 eastbound through South Lake Tahoe as the town goes under an evacuation order because of the Caldor Fire on Aug. 30, 2021. Photo by Karl Mondon, Bay Area News Group

Thousands of cars stuck in traffic so knotted that one South Lake Tahoe resident moved just 30 feet in two hours. Snow guns deployed to beat flames away from the Sierra-at-Tahoe ski resort. Smoke and ash so dense that the clarity of Lake Tahoe’s brilliant blue water — not to mention the balance of its delicate ecosystems — could be troubled for years to come, CalMatters’ Rachel Becker reports.

Those are just some of the scenes emerging from the Caldor Fire, which on Monday forced South Lake Tahoe’s 22,000 residents to evacuate as flames entered the basin — a scenario firefighters had long been working to avoid. The blaze is the second in state history to burn from one side of the Sierra Nevada mountain range to the other — a feat achieved earlier this month by the still-growing Dixie Fire. Gov. Gavin Newsom on Monday night declared a state of emergency and issued an executive order to support the state’s wildfire response and recovery efforts.

And, experts say, things are likely to get worse amid gusty winds and low humidity. The National Weather Service extended through Wednesday a red flag warning for the Northern Sierra and Southern Cascades initially slated to expire tonight. Meanwhile, the U.S. Forest Service announced that it will today close all 20 million acres of California’s national forests through at least Sept. 17, citing “extreme fire conditions” and “strained firefighting resources.”

The timing couldn’t be worse for Newsom, who is facing a recall election on Sept. 14 and has taken particular heat for vastly overstating the state’s progress on fire prevention. Today, a group of Republican state lawmakers is holding an informational forum on wildfires — an attempt to revive an oversight hearing into Newsom’s fire prevention strategy that was abruptly canceled last week, along with a hearing on the state’s beleaguered unemployment department.

In a sobering indication of how many crises the world is facing right now, the U.S. Army is sending about 200 active-duty soldiers to assist with wildfire suppression in Northern California. Meanwhile, Newsom on Sunday deployed urban search-and-rescue teams to Louisiana to help the state respond to Hurricane Ida.