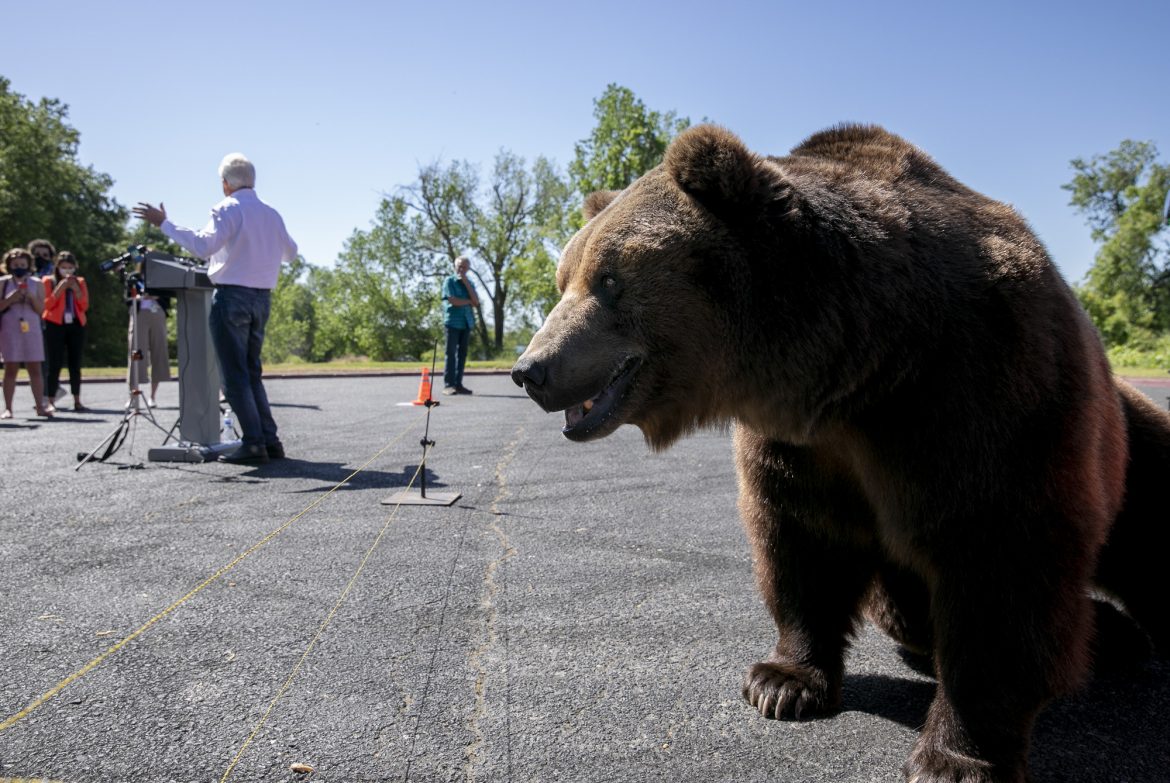 Nine-year-old Tag, a 1,000-pound Kodiak bear, pads around the parking lot while recall candidate John Cox speaks to the press at a campaign event at Miller Regional Park in Sacramento on May 4, 2021. Photo by Anne Wernikoff, CalMatters

With six weeks to go before Californians decide whether to recall Gov. Gavin Newsom, the favorite of major GOP donors is still Kevin Faulconer. The former San Diego mayor has amassed more than $3 million in contributions. While most of his haul has come from big spenders, the median contribution was $5,000, according to campaign finance reports filed Monday.

Conservative talk show host Larry Elder’s campaign has raised more than $1 million, according to his daily financial filings. That puts him second to Faulconer in total contributions, excluding self-funding.

Despite being related to the Kardashians and boasting a private plane, Caitlyn Jenner has so far outraised the rest of the replacement candidate field among small-dollar donors who give less than $100 and therefore aren’t listed by name. With the help of some aggressive digital fundraising techniques and massive name ID, she has taken in nearly $200,000 in these non-itemized contributions. That’s the good news. The bad news: Her campaign has spent hundreds of thousands more than it’s taken in.

John Cox, the Rancho Sante Fe millionaire who has exhibited no qualms about pouring vast sums of his own money into his campaigns, has already invested $7.6 million into the recall.

Unlike typical campaign donations, which are capped at $32,400, candidates can give themselves as much as they can stomach.

Rob Stutzman, a Republican consultant who worked on Arnold Schwarzenegger’s successful 2003 recall campaign, said this latest round of financial reports point to Faulconer and Elder emerging as the most viable replacement candidates on the ballot.

“Those are the two that have the money” and are well positioned should a majority of voters opt to recall the governor, Stutzman said. “And lightning might strike. Newsom is walking around with a ten-foot tin pole in the air, and he might get zapped.”

Altogether, the candidates hoping to replace the governor have raised nearly $15 million. That’s not bad for an off-year, unexpected election, but still far less than the more than $40 million Newsom’s allies have collected.

From the new filings, here are four takeaways on how recall candidates are using their campaign cash:

When Jenner’s campaign started looking for merch-makers to produce its “Wake Up The Woke” flat brim cap — still available on the campaign’s website for $32 — it knew just who to turn to: Ace Specialties.

For months, it has been clear that Jenner has been turning to the operatives and fundraisers who make up Trump World to bolster her run for governor. The new spending reports show the lengths to which the former Wheaties spokesperson has built her campaign on the infrastructure left behind by the former president.

Jenner has whipsawed in her support for Trump. She backed him in 2016, only to denounce him two years later after his administration banned transgender people from military service. This year, she claimed to have sat out the 2020 election (despite records showing that she cast a vote) and recently said that she would not welcome his endorsement in the recall race, even while pledging to back a future Trump presidential run.

Cost of Cox’s bear a mystery

If you know two things about Cox, it’s that 1) he ran for governor in 2018 and 2) he spent much of the spring palling around with a bear named Tag.

That famous — perhaps infamous — rebranding effort was reportedly the brainchild of attention-grabbing media consultant Fred Davis. Before joining Cox, Davis was best known for Carly Fiorina’s “demon sheep” ad in her failed 2010 U.S. Senate run — a political spot memorable only for being so perplexing and unsettling.

Davis’ firm, Strategic Perspectives, has done well with Cox this year, pulling in $343,307 for its services.

The only animal-related item in the campaign’s spending report: $1,872.60 for veterinary services, evidently the city of San Diego’s precondition for Cox and Tag’s joint appearance there.

Nor did Ramirez provide any information about the cost of the ball of trash that the prop-loving Cox carted around the state — a commentary on homelessness. One possibility: Cox’s filings list a $20,523 expense with Vision Scenery, a San Fernando Valley prop shop. The campaign also spent just shy of $300 at two San Diego-area Home Depots. Perhaps that was it?

Good guess, but no, said Ramirez.

“A lot of those Home Depot expenses were to buy various gear to make sure the trash didn’t fly off” while toting it around the state, he said. “Littering while trying to make a point about trash wouldn’t have been a very good look.”

Paffrath has raised the most money out of any candidate who will have a “D” next to their name on the ballot. Newsom isn’t a candidate in the recall, and even if he was, the partisan affiliation won’t appear on the ballot because he lost a lawsuit involving his own appointed Secretary of State.

The youngest of the three Kevins in the race, Paffrath has brought in more than all but five candidates and has raised nearly $70,000 in contributions of less than $100, the second most.

That’s not to say he’s getting most of his money from small, online donations; the real estate investor loaned his campaign $90,000.

Paffrath, who has no political experience, claims nearly 1.7 million subscribers to his “Meet Kevin” YouTube channel, where he posts videos about real estate and financial investments. It’s a lucrative endeavor; he and his wife were on track to make $6 million last year, according to one account, and they reported more than $468,000 in 2019 income.

His fundraising, however, seems more robust than his public support. In a recent poll 14% of likely voters were considering Paffrath, but just 3% selected him as their first preference.

Paffrath is bringing his business approach to his campaign. His new filing shows $57,800 in video production costs, plus $6,475 for translations for TikTok. His 53-minute official campaign announcement video, with his 20-part plan as governor, has 166,000 views on YouTube.

Faulconer saves for the stretch run

The final weeks of a campaign are often when candidates decide to spend their war chests. Some candidates have larger stockpiles than others.

Faulconer reported $1.4 million in the bank, available to be used on ads, get-out-the vote efforts and other staples. Cox, on the other hand, has already burned through most of the nearly $7 million he collected between January and August, most of it his own money. He still has nearly $600,000 to spare, and presumably can draw even more on his own bank account.

That’s all slim pickings compared to the governor’s defense fund. The main committee seeking to keep Newsom in office still has $17 million in the bank — and continues to raise money at a speedy clip.

Then there are the candidates who find themselves in the red. Ose has $151,826 cash on hand, but that’s less than the $158,354 in outstanding debts to campaign consultants, lawyers and printing shops.

In a statement, spokesperson Steven Cheung downplayed concerns about the candidate’s financial standing, noting that the campaign “has invested heavily in prospecting potential donors and supporters.”

“Caitlyn has widespread name recognition, to the tune of 99%, while other candidates need to spend large amounts of money to increase their name identification,” he said. “She does not have that issue.”