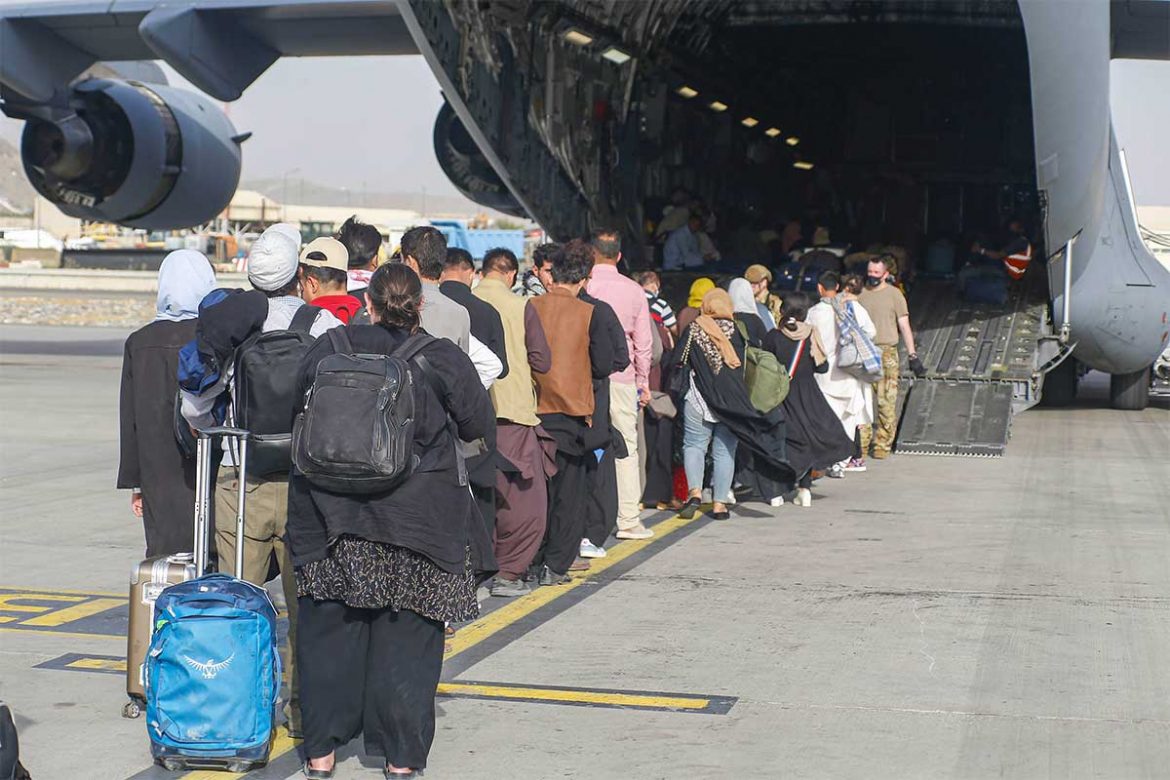 Evacuees stage before boarding a military plane during an evacuation at Hamid Karzai International Airport, in Kabul, Afghanistan, on Aug. 18. As the nation faces the prospect of another exodus of its top scholars, several universities in California have stepped up with fundraisers to sponsor them in the U.S. (Photo by Lance Cpl. Nicholas Guevara/U.S. Marine Corps)

It has been a little more than a week since Kabul, the capital of Afghanistan, fell to Taliban control, ousting the democratically elected government.

The scene over there is desperate, as many Afghan citizens look for ways to leave their home country, even if that means clinging onto the outside of an American military plane as it takes off.

And while many Afghans have been unable to leave, the despair and anxiety has certainly made its way to the United States. And in the Bay Area, home to the largest Afghan population in the nation, those emotions are palpable.

“Sunday morning (Aug. 15) when I got up, I was just floored,” said Halima Kazem-Stojanovic, an Afghan American journalism professor at San Jose State University. “I think I spent the entire day just trying to figure out how can I help, what can I do, but the messages were just pouring in.”

Kazem-Stojanovic, who reported in Afghanistan for 13-14 years, said within the first few hours of Kabul’s fall, former sources, friends, and journalists she trained in her home country flooded her inbox looking for support.

“And so, I kept thinking, OK, well, I can’t be all over the place. I’ve got to find a niche that I could help,” Kazem-Stojanovic said.

The people who were contacting her were professionals who excelled in their fields. They ranged from professors to outspoken woman videographers and photojournalists, many of whom were different academics who would be at risk under Taliban rule.

Then it hit her — she could take advantage of having so many universities in the state and use her teaching positions at San Jose State University and at UC Santa Cruz to help create positions and opportunities for Afghan professionals and their families to come to the U.S.

And that’s exactly what she is helping create.

This week, with the help of Kazem-Stojanovic, SJSU’s Human Rights Institute along with the University of California at Berkeley’s Human Rights Center teamed up to raise money to sponsor scholars at their universities.

The original goal was to reach $100,000 by Aug. 27 because the UC Berkeley Vice Chancellor for Research Opportunity Fund has pledged to match it, dollar-for-dollar, to enable emergency travel and placement in the Bay Area.

“If we get $200,000, we could bring four to five scholars here, with their families,” Alexa Koenig, executive director of the Human Rights Center said. “Of course, we want to bring as many people as possible so even if we reach our first goal, we will keep raising more.”

UC Berkeley has agreed to waive all fees that are typically for scholars in residence. The university also offered support to help expedite the process for those scholars and their immediate families.

“So, what would take weeks or months, is now happening in a matter of days,” Koenig said. “At least on the university side of things.”

As of Friday, UC Berkeley, with the help of Kazem-Stojanovic, had identified three people already to be part of their scholars-in-residence program.

However, because the three individuals are still in Kabul, Kazem-Stojanovic said she felt uncomfortable sharing too much about them as their lives could be in subsequent danger.

“But what I can tell you is that one is a law professor and the other is a woman journalist and woman’s rights activist,” Kazem-Stojanovic said.

UC Santa Cruz is also poised to accept two Afghan professionals and Kazem-Stojanovic said she is working closely with SJSU to identify how many positions they can offer.

Having scholars-in-residence across California universities would be a win-win, Kazem-Stojanovic said.

It would address the “brain drain” that is starting to happen once again in Afghanistan while keeping academics safe. And instead of having knowledge and lived experiences from Afghanistan be unrecorded and forgotten, it could be stored and salvaged at local academic institutions.

“Scholars and academics could document their experiences and be able to record it, so we don’t lose that knowledge, that brain drain that’s happening in Afghanistan,” said Kazem-Stojanovic. “It’s almost like it’s fleeing but I want to capture it.”

A brain drain happens in times of crisis because people flee, especially the nation’s brightest, and they look for opportunities elsewhere. Afghanistan has undergone several brain drains in the last four decades as the country survived coups, foreign intervention and civil war.

She left Kabul in 1980 and came with her parents to the Bay Area as refugees.

“My father was the chair of the faculty of economics at Kabul University in 1978,” she said. “My mom, one of the few female directors at the national commercial bank.”

Unfortunately, when they came to the U.S., they couldn’t utilize their skills.

“Scholars-in-residence allows all of us, including the scholar, to benefit from their work,” Kazem-Stojanovic said. “It’s a preservation of history and knowledge.”

Koenig and Kazem-Stojanovic hope to expand the program and place Afghan scholars all over the state and eventually the country.

And it seems like they may be able to reach that goal. Within the first hour of the crowdsource campaign, 40 people donated to raise $6,640.

And as of Monday evening, more than 700 people had donated to raise $117,000 — an amount that triggered the university’s matching contribution and prompted the campaign to extend its fundraising target to $150,000.

“I think the power of this really does depend on other campuses, also stepping up and joining us, and collaborating with us,” Koenig said. “Because if we do collaborate and become a network on this, the number of people that we could potentially help would be limitless.”

It will likely be weeks or months before the first scholar-in-residence steps foot on a California campus though, because of the legal challenges of getting a visa and other immigration processes sorted out.

“In the meantime, we are working on securing the funding to make sure we can make that transition,” Koenig said.

All the money raised in the crowdfunding campaign will go directly to Afghans in need. There are no overhead costs and money will be used to pay for flights, potential legal fees and resettlement support for the scholar, their spouse and children.