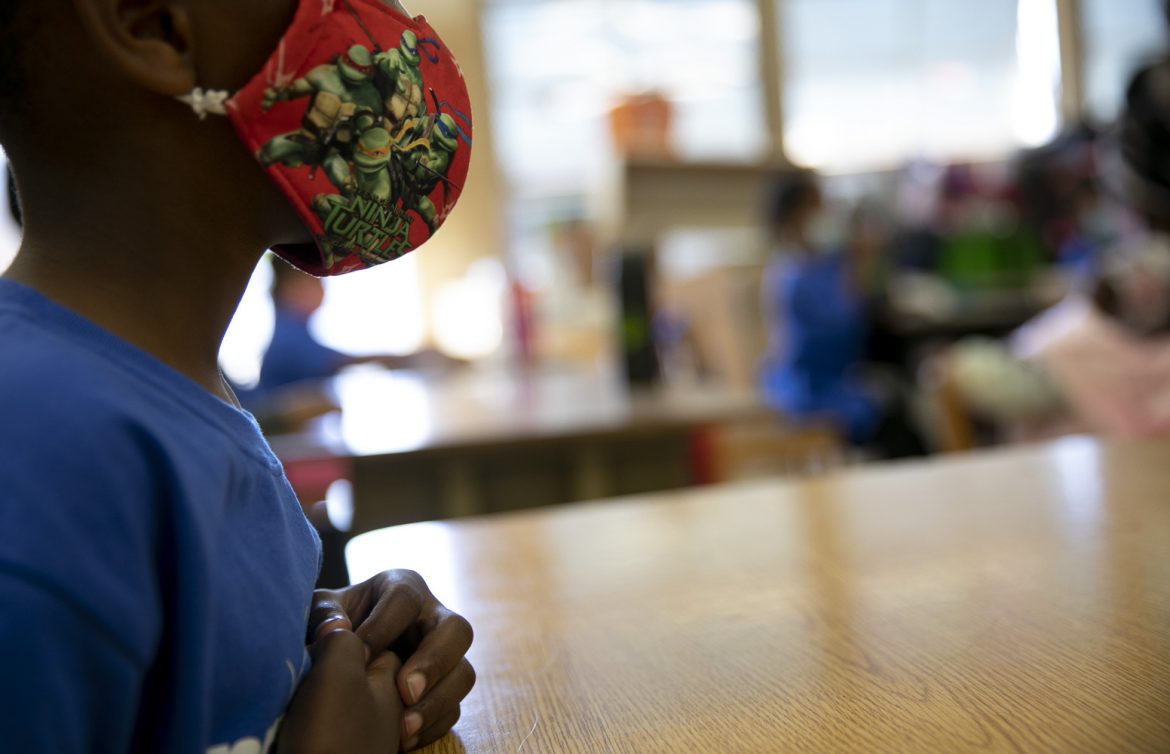 Students wear masks and sit one to a two-person desk in order to social distance during summer classes at Laurel Elementary in Oakland on June 11, 021. Photo by Anne Wernikoff, CalMatters

California’s smallest school districts say they will refuse to send kids home for not wearing a mask despite a new state mandate.

Superintendents in these tight-knit and typically more conservative communities want the state to let local districts make their own decisions, considering the success some of them have had with reopening their campuses last year without triggering COVID-19 outbreaks.

“These districts were in class all year, and they just don’t believe masks are needed to teach children,” said Tim Taylor, executive director of the Small School Districts Association, which represents hundreds of districts with fewer than 5,000 students.

On Monday afternoon, the California Department of Public Health went back and forth on updates to its masking rule. Health officials first said students who refuse to wear masks without a valid medical excuse won’t be allowed on campuses. Four hours later, the agency revised the guidelines to say local districts will be responsible for enforcing the mask mandate.

“If the state is not going to enforce mask-wearing then neither am I,” said Amy Alzina, superintendent of Cold Spring Elementary, a 198-student, single-school district near Santa Barbara.

“Students, especially English learners, rely on nonverbal communication” she said. “I spent last year trying to smile at students with my eyes.”

The district resumed full in-person instruction in October. The district had no COVID cases with about 90% of its students returning to campus for nearly the entire school year.

State officials said the updated guidelines only extend the mask mandate already in place and continues the policy of local enforcement.

“There’s still a pandemic happening, the Delta variant is dangerous and the majority of students still aren’t vaccinated,” said Alex Stack, a spokesperson for Gov. Gavin Newsom. “We can open schools safely, but COVID prevention strategies are necessary to keep everyone safe.”

Stack said county health agencies are responsible for making sure districts enforce the mask mandate, and that he couldn’t speculate on whether the state would penalize districts.

Newsom’s decision to leave some decisions to local districts while maintaining some vague statewide guidelines is reminiscent of his approach to school reopenings.

“As it’s been throughout the pandemic, (the state health department) is not built to enforce,” Stack said. “The local agencies enforce these things.”

As of now, state rules nominally give students only two choices: either wear a mask to school or refuse to wear a mask and enroll in virtual independent study.

Some rural districts do plan on enforcing the mask mandate and expect at least a few phone calls from frustrated parents. But administrators there doubt many parents will choose independent study just because they don’t want their kids to wear masks.

“They’re gonna make a big fuss,” said Patricia Gunderson, superintendent of the Lassen County Office of Education. “But if that’s the difference between their kid being in class or being at home, they’re probably going to wear a mask.”

Gunderson said she would urge the 10 small school districts in her county to enforce the mask mandate. But she said the parents in her conservative community are losing patience.

“In a community that’s predominantly red, people are used to doing their own thing,” she said. “It’s going to create tension between our parents and our administration.”

Leaders at some rural districts are hoping to find a middle ground.

“The whole purpose of my job is to get kids in school,” Borba said. “We’re gonna do everything we can.”

Stack, the spokesperson for the governor, could not answer whether the state will intervene if county health agencies approve district plans allowing unmasked students on campus in defiance of state mandate.

Gunderson, however, said she’s urging superintendents in her county to abide by the mask mandate. Smaller rural districts, she said, might not be able to afford a steep fine from the state.

“When you’re a small district, and you don’t have a huge budget, you have to be really careful with putting your district at risk,” Gunderson said.

Alzina, the superintendent at Cold Spring Elementary, said she would require masking on her campus again if the state does try to punish her district or if there’s a spike in COVID-19 cases.

“If there is an issue, we’ll continue to align with the state,” she said. “I’m not gonna go rogue.”