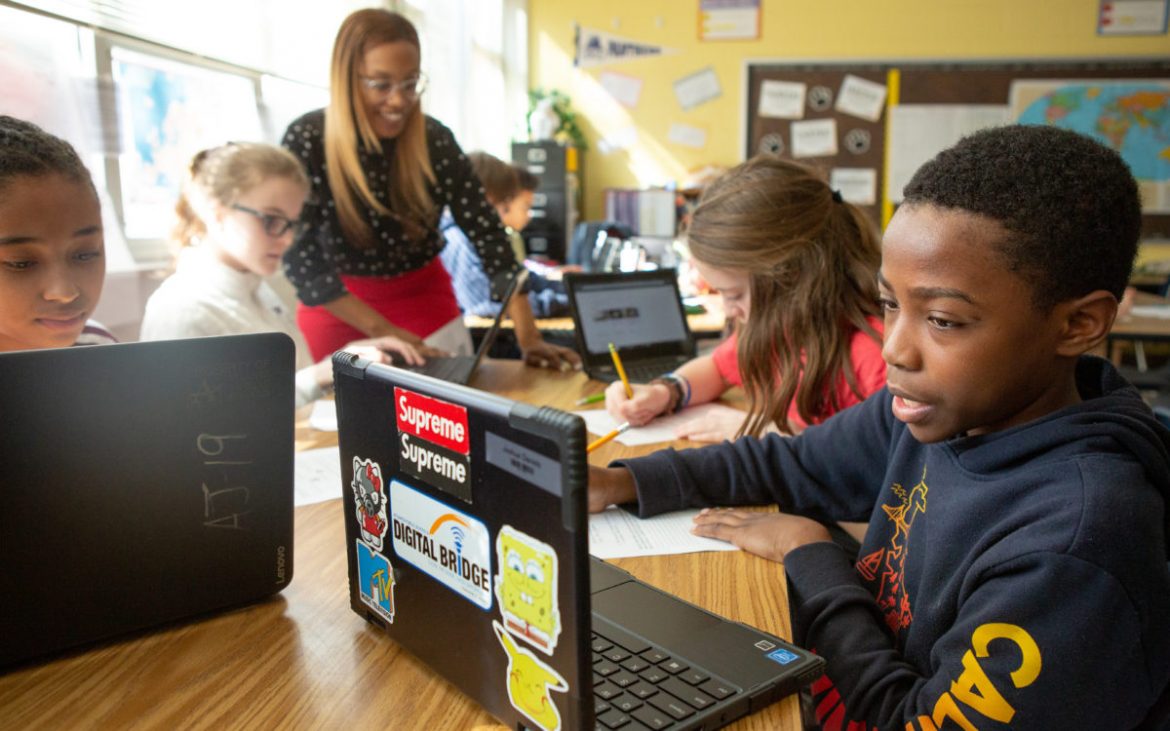 When the COVID-19 pandemic shuttered schools, the grades and mental health of millions of students declined. Several of the leading Republican challengers in the upcoming recall election of Gov. Gavin Newsom see this crisis as an opportunity.

The candidates — CalMatters interviewed John Cox, Larry Elder, Kevin Kiley and Doug Ose for this article — want to “empower” parents by sending state dollars directly to the families rather than school districts. Parents can take that $14,000 dollars of per-pupil spending from the state to any traditional public, charter or private school they like.

Turning parents into consumers, the candidates say, will cultivate competition between schools. Parents will “vote with their feet,” and if the state plunges the public school system into the free market, schools will finally have to provide a high-quality education to stay afloat.

“Ultimately, I would like to see traditional public schools look a lot more like charter schools,” said Kiley, a Sacramento area state Assembly member running in the Newsom recall election. “I would like to have districts liberated from our education code: Less mandates coming from Sacramento and a lot more freedom.”

These Republican candidates also say that teachers unions have undue influence on the public education system, and they accuse the unions of using political sway to lobby for charter school regulations. Conservative talk show host Elder — who is running on the most radical school-choice platform of the four — said if elected he would declare a state of emergency for California’s public schools and fire the state’s 15,000 “worst” teachers.

The California Teachers Association on Wednesday reported a $1.8 million donation to the anti-recall campaign, the fourth largest contribution so far in support of Newsom. The American Federation of Teachers, the national union, has given $250,000.

While the candidates paint a clear picture of what their education system should look like, many aren’t ready to give up on the traditional public school system. Despite the state spending more money than ever to education, some experts say public schools remain underfunded. With the Newsom administration’s historic spending, they say, California is on its way to seeing what the current system can really do for students.

With this year’s budget, Newsom continued his commitment to early childhood education, including funding to achieve universal transitional kindergarten by 2025. He also increased funding for schools in low-income communities as well as for special education.

“For a long time, California ranked at the bottom of per-pupil funding relative to other states,” said Julie Marsh, an education professor at the University of Southern California. “I don’t think we’re ready to throw in the towel yet.”

The major Republican candidates all say that under Newsom, California’s public school system failed students during the pandemic. They say K-12 education in California is controlled by special interests, primarily teachers unions, who supported extending the school closures.

Throughout California, private and charter schools began offering in-person instruction while most public schools remained in virtual learning. Some parents flocked to these schools to get their kids inside a classroom and in front of a teacher.

The Republican candidates say the charter and private schools that took their chances on reopening should be rewarded for their success.

“We need to empower the parents to evaluate schools,” said Ose, a former California member of Congress running in the recall election. “I think parents right now are beat down by a system that pats them on their heads and dismisses their concerns.”

For Ose, Kiley, and Cox, who also ran unsuccessfully in 2018, empowering parents means having the state money follow the student, whether they go to a traditional public school, a public charter school or a private school.

“My figurative description is to put the money in the child’s backpack and send it to school with them,” said Ose. “Why should we dictate to parents where their kids can best be educated?”

This type of system is often called a voucher program or an educational savings account. It would take the money that the state allocates for each student and give it directly to parents.

But the candidates face an uphill battle against Democratic voters as well as a Democratic supermajority in the legislature. California voters rejected ballot measures that would launch school vouchers in 1993 and 2000.

Cox said it’s a “different environment” in 2021. The Republican candidates are hopeful public opinion has changed, especially after the pandemic.

For the Republicans vying to replace Newsom, the pandemic has demonstrated that parents need options when the traditional public school system fails to serve them. They say lawmakers have instead restricted school choice at this critical moment.

In the past year, Democratic lawmakers supported legislation that would restrict charter school enrollment and funding, especially for virtual charter schools. In 2019, Newsom signed into law a controversial bill that would allow school districts to consider the fiscal impact of approving a charter school. Both were condemned by charter school advocates.

“That is an inherent conflict of interest,” said Kiley.

The Republican candidates say that a few bad actors have tarnished the reputation of charter schools and that others throughout the state have made significant progress in closing the achievement gap for Black and Latino students. And if a charter school doesn’t deliver, the candidates told CalMatters, the state will hold it accountable — but they expect parents will, too.

“If a charter school is not performing, you shut them down. Parents vote with their feet by going there,” said Ose. “That’s how charter schools succeed. The ultimate consumer is the parent.”

Voting with your feet, however, isn’t so easy for all families: Charter schools aren’t required to provide transportation for all students. Parents who can’t drive their kids to school don’t have the option of exploring beyond their neighborhood schools.

“It is a privilege to be able to vote with your feet because it means you have modes of transportation,” said Liz Guillen, an attorney at Public Advocates, a law firm that has advocated for charter school regulations.

It also goes beyond material resources. Parents in affluent neighborhoods are often better equipped to explore the options for their children’s education.

“It also means you’re savvy and educated or experienced enough to understand the system,” said Guillen.“We’re not all on the same page when it comes to navigating the public school system.”

While candidates Cox and Kiley said they would help parents navigate the system, Elder said parents, regardless of their own education level or income, should take the initiative to find the best school for their children.

Some charter schools have had success working with high-needs students, even closing the achievement gap for Black and Latino students.

Perhaps most importantly, their independence from the bureaucracy of school districts allows them to be nimble. They can decide their own curricula, offer internships for students and bring in experts to teach students.

Ted Lempert, president of Children Now, a research and advocacy organization based in Oakland, says charters were initially designed to be hubs for educational innovation.

“To me, the great thing about charters, the good ones, is that they don’t just educate students, they can help improve the whole system,” he said. “If some schools are doing a really great job, what can you learn from that and apply to all schools?”

Charter schools in California were able to experiment with programs like project based learning and dual-language immersion, which have more recently become more prevalent in traditional public schools.

“I can see charters having a positive impact on all public schools,” Lempert said. “It’s so politicized. DeVos messed things up for everyone.”

Republican challengers in the Newsom recall contend that the governor has only poured money into the broken machinery of public education while failing to move the needle for students.

“There’s no reason we could not be achieving vastly superior outcomes,” said Kiley. “Before we pump even more money into the system, we need to make reforms.”

While the billions of dollars the state gives to public schools sounds like a lot, per-pupil spending in California was among the lowest in the country, according to a 2018 study by Policy Analysis for California Education.

But experts say with this year’s record-breaking $123.9 billion K-12 education budget, Newsom is taking steps toward adequately funding and fully realizing the potential of both charter and traditional schools. Per-pupil spending will go from about $10,000 to $14,000. This puts California closer to the mid-tier among per-pupil spending by states, but the amount is still much lower than states like New York and New Jersey, which spend over $20,000 per student.

“We made great strides and significant investments this year,” Lempert said. “Newsom deserves some credit for that.”

Candidate Cox said he would prefer not to cut the education budget while in the same breath saying he would try to cut school administrative spending.

Other candidates said California’s education system focuses too much on the adults on campus.

“I think we’ve gotten away from public schools being an education program and focused on it being a public jobs program, and that’s a mistake,” said Ose.

“We have far fewer adults in our schools. We ranked at the bottom of all states,” said Marsh. “The adult-child ratio was at the bottom in every category.”

Experts and left-leaning advocates agree with the Republican candidates, however, that parents should be able to decide where their kids go to school, and that successful charter schools do have a place in the future of California public education. But that doesn’t mean charter and private schools should replace the system.

“You want parents to have some choice within the district,” Lempert said. “But ideally, every neighborhood school would be really strong. That shouldn’t be a dream.”